The exhibition was accompanied by a booklet with a text by Thomas Wagner and photography by Werner J. Hannappel. 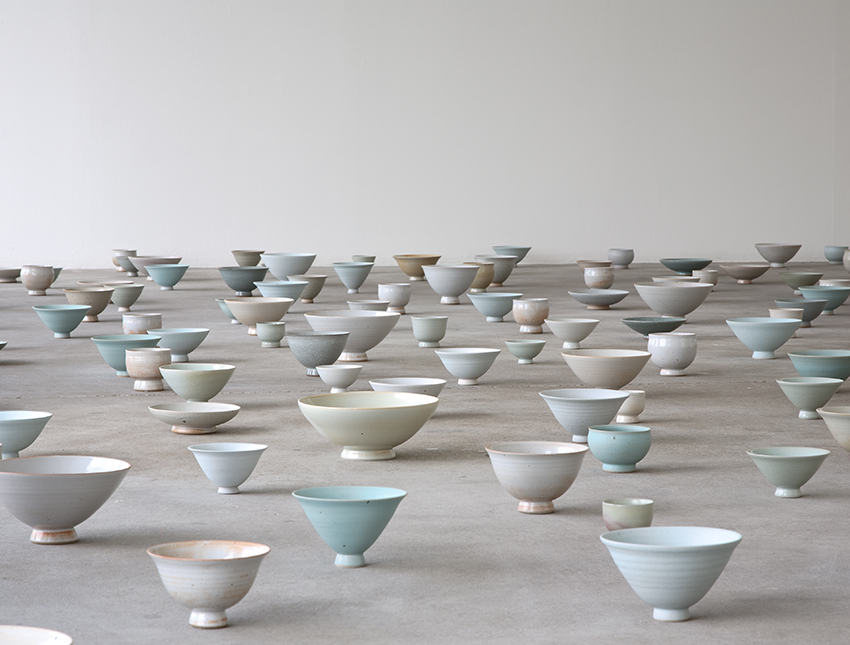 Galaxy 333
Notes on the bowls by Young-Jae Lee

There are two reasons why it is difficult for me to shed light on the quality and significance of Young-Jae Lee’s ceramic vessels. On the one hand, she is exhibiting a large selection of her bowls in the Gallery of the DKM Foundation – it is, surprisingly, her first show in the Ruhr region – but such bowls make up only a small part of her wide-ranging oeuvre. On the other hand, I know Young-Jae Lee and her works since 1978. I see her vases and bowls every day, observe and avail myself of them. As a matter of course, I use the matching plates, dishes, bowls, and storage vessels she developed when she took over the Ceramic Workshop Margarethenhöhe in Essen in 1987 and has successfully headed since then. But it is harder to approach familiar things than something you have just discovered. Fresh enthusiasm can help you overcome any number of hurdles. And there is also the danger that you take things you are used to and familiar with for granted and suppress matters that are essential. 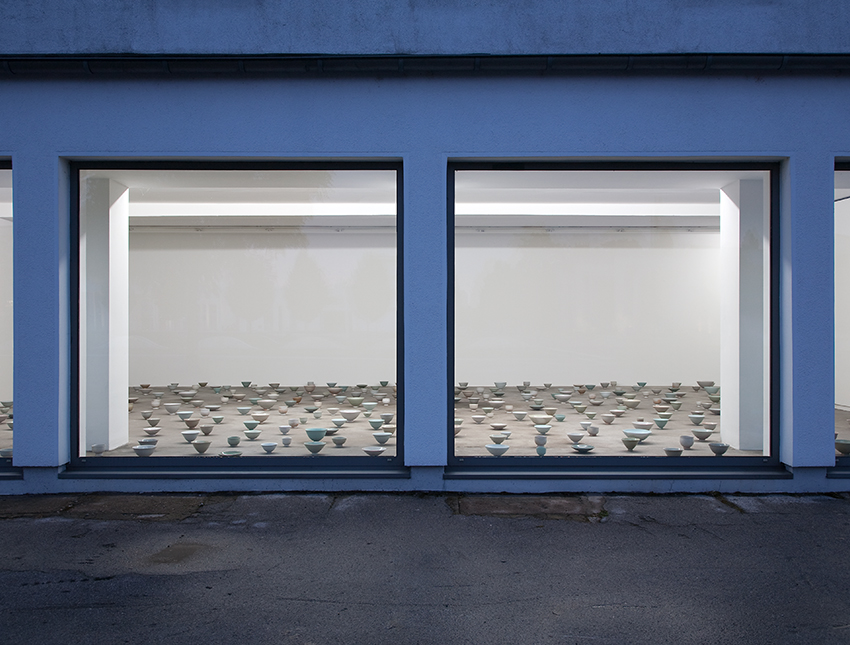 What would that be? What is the essential thing about Young-Jae Lee’s ceramics? What is the difference between her works and those by other ceramists? The matter is in fact quite simple: Young-Jae Lee’s vases and bowls are always an aesthetic object and an article of daily use, vessel, and sculpture. What she makes is not applied art in the usual sense; they are not examples of applied art objects. On the contrary. Her bowls and vessels combine sculpture and pottery in a way that does not permit one to say where art starts and where craftsmanship ends – and vice versa. I know that Young-Jae Lee, who is very modest, would never characterise herself as an artist. But we are not concerned with labels here. Just because we believe to know that art must be non-functional and a vessel always serves a purpose, we usually separate things that can by all means go hand in hand. Is it no longer art when Picasso paints a plate instead of a canvas? Or when Marcel Duchamp, who asked the crucial question if and how one can make an artwork that is not an artwork, flipped over a normal hardware store urinal almost 100 years ago, signed it “Richard Mutt” and called it “Fountain”? Just taking measure of the conventional can easily lead to overlooking the special.

Art, craftsmanship and industrial production have entered into very different and complex relationships in modernism; why should synthesis of crafted vessel forms and a sculptural body not be possible? Particularly as Young-Jae Lee does not take on commissions and has presented her works for a long time in an art context, often in the form of an installation or an environment. The connection between vessel and sculpture as produced by Young-Jae Lee does not exist in a vacuum, is neither formalistic nor without a sense of history. Her vessels are not isolated; they are comprehensible functionally as well as visually. And they do not stand in a single tradition, but combine Eastern, Korean, and Japanese elements with Western, European, and American.

On the one hand, the long tradition of Korean ceramic vessels has had a decisive influence on her work, for example the elegance and simplicity of Joseon porcelain or the so-called “Moon Jars” from the fifteenth to eighteenth centuries. But the dissimilarities to Lee’s vases become immediately noticeable when you compare them to the historical pieces which are rarely exhibited in Europe. On the other hand, Young-Jae Lee studied sculpture in Wiesbaden under Erwin Schutzbach. It was a time when artists such as Richard Serra and Robert Morris, Michael Croissant and Franz Bernhard endeavoured to redefine mass, volume and weight in space and on a level with the viewer as well as to explore the basic relationships to space as well as to lying, standing and leaning. Richard Serra thus aspired to underscore the inner movement of the static in his works, whereby it is the verbs representing altering activities that point out the direction: “to crease, to fold, to store, to bend, to shorten, … to curve, to lift, to inlay, to impress, … to hook, to suspend, to spread, to hand, to collect – of tension, of gravity, of entropy, of nature, of grouping, of layering.“[1] One can vary this series with a view to the vessel: to enclose, to open, to edge, to pull, to bend, to assemble, to expand – of the body, of the enclosure, of symmetry.

In short, Young-Jae Lee’s vessels are not only vessel and body; they also partake in the development of sculpture, especially sculpture of the nineteen sixties and seventies. This can ultimately be seen in the fact that she always reduces things down to the absolutely necessary, gets along almost entirely without decorations and goes beyond the traditional. We are confronted with decidedly contemporary vessels that do not deny their origins, producing instead a very close link between Western minimalism and elegant Eastern relinquishment.

It is well-considered that Young-Jae Lee’s ceramics are not construction forms, but vessels instead, i.e. volumes that grow from within. One could say: they revolve as forms of action around a whole. She forms and determines them. Vessels themselves are to a certain extent such a whole where interior and exterior touch and find an aesthetically stable balance based on this touch.

“A pot,” the philosopher Vilém Flusser wrote, “is a hollow space and that sounds negative. A hollow space results when something is hollowed out, abstracted, from a whole. For example with the help of a shovel. A ditch is a hollow space of this kind. It is possible to make pots, for example, by shovelling in a ball of loam with one’s thumbs. But pottery was probably invented in a completely different fashion. One probably first interlaced the fingers of both hands together in such a way that a hollow space was produced to gather drinking water. Branches were later woven together instead of using one’s fingers, and this is how baskets (and fabrics as a whole) came about. But because baskets cannot retain liquids, loam was applied to the interiors. Either by chance or on purpose, people ultimately burned these watertight baskets (we know that accident and intent are mutually dependent), and thus the first beautiful pots with black geometrical patterns on red ground (the traces of the burnt branches) were produced.”[2] If one examines the world from the “potter’s point of view,” then, according to Flusser, “one sees these pots behind all appearance and through all appearances that grasp and inform these appearances. The sphere behind the apple, the cylinder behind the tree truck, various geometrical shapes behind the female body and most recently the so-called “fractal” forms behind seemly formless appearances such as clouds and rocks.”[3] That is why Flusser equates the “potter’s glance” with an “X-ray like” glance. For him, appearances are only a fleeting veil concealing eternal forms. Lee’s vessels also attempt to grasp these eternal forms. But not in the sense of an abstract concept, but by making the experience of fundamental plasticity visible and simultaneously useable. A type results from her manner of grasping and informing, but no uniform mass.

When Young-Jae Lee now places 333 bowls in the exhibition space of the DKM Gallery like in an oversized showcase, it does not solely concern the number in and of itself; it concerns – as was wonderfully shown by the 1111 bowls she spread out three years ago through the rotunda of the Pinakothek der Moderne in Munich – similarities and differences. You are always looking at bowls, but the one is not like the other. 1111 or 333; they are always unique pieces, always 1+1+1+1+1… While all of these vessels fall under the terminology of the bowl, this categorisation is put to shame by means of boundless abundance of the variations. Severity is combined with sumptuousness.

At times it concerns a cylindrical foot on which a flat disk rests that first turns inwards at the very edge as if it was suddenly startled by its openness. At other times it concerns delicate chalices that shyly balance on a small ring. At times it concerns a broadly hollowed out, open cone that seemingly hovers over a slightly conical base and is nevertheless hesitant in its irregularities. At other times it concerns bellied cups that conceal their interiors, but nevertheless offer themselves to the eye and the mouth with a brash curve of the delineating lip. Other examples expand and spread out their clay skin as if they wanted to draw everything around it into itself in one gulp. Whether it concerns graceful, silky grey chalices, rustic freckled or glacier-coloured bowls, taken together they form a field of sheer individuals.

And the art of pottery does not exclude the element of chance in all of this. Despite her knowledge and experience in dealing with fire and heat, with the temperatures of the molten mass and the reaction of the materials, she allows for what the writer Paul Valéry called “ennobling uncertainty in its immeasurability”[4], and thus remains a risk.