The exhibition was accompanied by a booklet with a text by Arie Hartog and photography by Werner J. Hannappel. 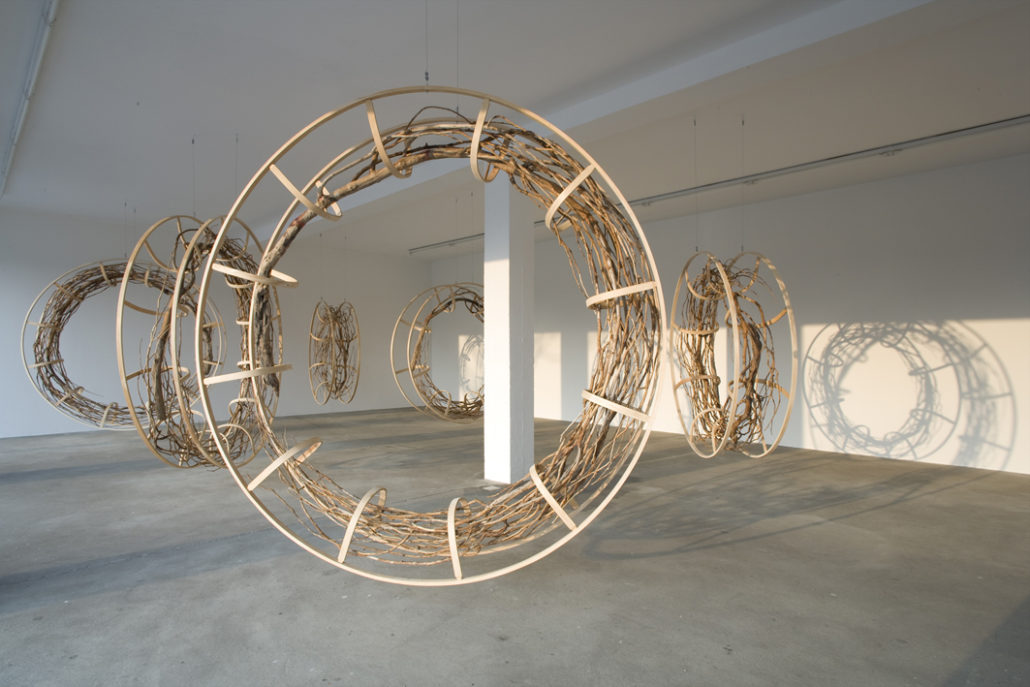 Growing in a Circle: On Hayato Goto’s New Works

It is tempting to look for traces of a typical Japanese aesthetic in Hayato Goto’s sculptures. The simplicity of these works — their clarity and tranquility, simultaneously overt and hidden symbolism — combines in the mind with the artist’s name and the knowledge that he was born in Kyoto: a context that, with the help of translated classical Japanese texts and contemporary interpretations, might well permit the building of an interpretive framework. Constructing such a framework is a reflex nowadays — one that, even when it pretends otherwise, emphasizes the foreign. It is a reflex that relocates the uniqueness of the artwork to a faraway place, when the challenge might be to experience it here and now. Forms and ideas have always traveled (and entrenched themselves not on account of their origins, but because they develop various levels of meaning in their respective environment).

At first glance, Goto’s eight sculptural circles would seem to highlight the obvious contrast between laminated, machine-processed wood and the material as it appears in nature, as a tree trunk or branch. Though this contrast certainly exists, it is in no way emphasized: their two parts move not counter to, but synchronous with one another. Branches bend around a laminate frame as though they had coiled themselves there, and this extreme bending reveals a peculiar, highly aestheticized force. Not immediately, as it takes the viewer some time to get away from the crystal-clear visual logic of synchronicity: Trees do not grow in circles. Since the bend of wood also has its limits, the shape of these branches also hints at the time-consuming-process of imposing an unnatural shape on nature —and one that looks natural at that. While Goto’s bent and glued wooden slats show obvious craftsmanship, the shape of the branches also points to the highly protracted, ultimately violent process of their making.

The two-part circles conceal gliding transitions between nature and design. Though each clearly comes from a tree, human intervention has shifted their forms far from the point of origin. And while the branches appear natural at first glance, their handling has arguably moved them even further away from nature than their machine-processed brethren. Thus while the seemingly simple visual language proves to be highly symbolic, it speaks to an open sort of perception that — rather than look for recognizable visual patterns — attentively waits for the sparingly and precisely employed means, the hidden dualisms and simultaneous unity to take effect. From this, in a next stage, a symbolic perception develops around the element of time: Trees and branches grow in one direction, have a beginning and a temporary end, while circles represent endless loops and, in a figurative sense, infinity as well. The viewer, who observes in each case a coherent, natural form that has been bent, looks for a beginning and an end and sees how these elements intersect. Even things that grow and develop in one direction return to a beginning; it is an image that contains a great deal of philosophy, subtle as it may be.

The discovery t ontains a branch raises the question of format: The curving of a long shape renders its size more manageable. At the same time, its original length remains difficult to imagine. Notably, Goto’s circular wood sculptures bear no resemblance to human proportions. Any vertical form recalls that of a human being; with any other shaped object in space, a viewer will often look for and imbue such dimensions or proportions with anthropologically-anchored significance, a process that enables them to explore their own spatial relationship to that object. Given the size of Goto’s circles (between 150 and 250 cm in diameter) — dimensions that would normally make these kinds of associations manifold and almost inescapable, the complete absence of humans as a reference is all the more evident here. The apparent contradiction between that absence and the gradual manifestation of the human-made, coupled with the hedged presence of nature, is what characterizes this work in the context of contemporary sculpture.

While the none-too-subtle, everyday visual vocabulary of many contemporary artworks all too easily feigns relevance (despite its flat reduction of symbolic levels), the mastered concentration of visual means presented here evokes multi-layered content that — despite its reliance on the experiences, cultural context, and knowledge of respective viewers — is anything but empty. It is extremely open. What we have here, in lieu of a search for clear opposites, contrasts and dissonances, an essential part of the visual vocabulary of our time — a work with visible parallels, dualisms and dualities. The real hallmark of Hayato Goto’s art is that it is at once subtle and highly legible, a combination that explains its particular symbolic impact. It relies not on conspicuous contrasts but on an apparently logical, yet by no means self-evident juxtaposition of elements that only gradually reveals itself to a viewer.