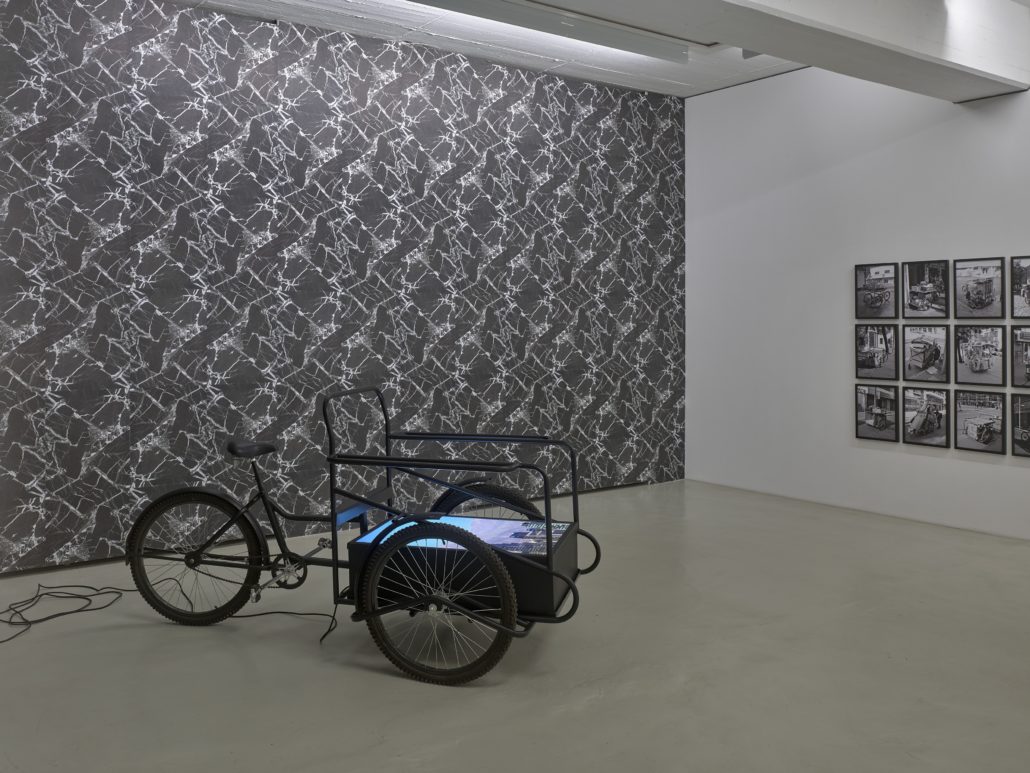 “Brains without hands! And who judge from above, but from afar, and always too late, to the multitude of brainless hands that work incessantly in favour of the world, perhaps suffering its pure loss, if not the loss of all. (…) Some think, it is said, and others act! But the true condition of man is to think with his hands.” 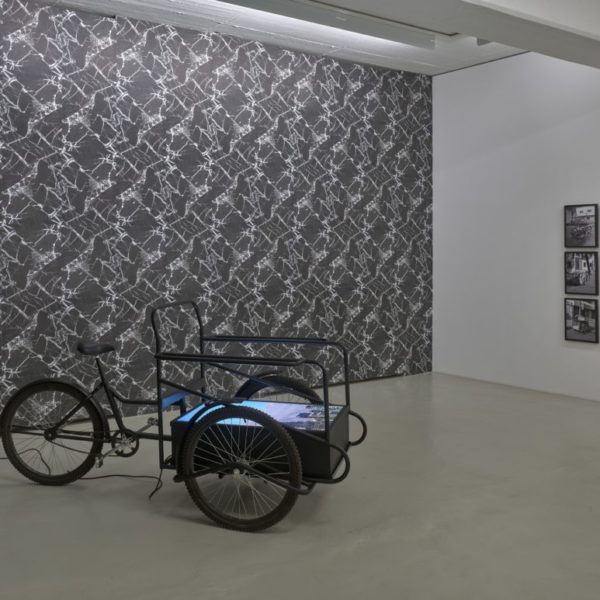 Behind a great formal economy there is a sharp critique of neoliberal logics and the consequences of its implementation in today’s world. To decode Patrick Hamilton’s work it is necessary to situate it in the time/space from which it emerges.

The Chilean artist was born in 1974, the year following the coup led by general Augusto Pinochet, which overthrew Salvador Allende’s democratic government. His adolescence was permeated by the atmosphere of tension and control of a violent dictatorship that lasted sixteen years and left over three thousand dead and missing in its wake. With the end of the regime in 1990, Hamilton witnessed a moment where political illusions were few and utopias had seemingly lost their momentum once and for all.

Perhaps precisely as a response to that conjuncture, the artist was never apathetic in the face of events around him. On the contrary, he remained close to those who returned to the country following years in exile and had committed to denounce the dictatorship’s abuses. His trajectory was surely influenced by this atmosphere. However, in his production, he chose not to focus specifically on the dictatorial period, but to problematize the implications of the radical economic reforms put in place by Pinochet’s cabinet in today’s Chile. Reforms which, among other measures, proposed a minimal state and the privatization of the welfare, health and education sectors.

So as to bring to the fore in a metaphorical, subtle manner the contradictions and distortions of Chilean society, and of the world at large, Hamilton resorts to a sparse vocabulary of pre-existing forms and materials. To speak of the macro he starts from the micro. Using processes of collage, repetition and rearrangement, the artist re-signifies the elements of that vocabulary made of sandpaper, spatulas and other tools that emanate mostly from the universe of manual labour and civil construction to establish, both between them and in their relationship with space, situations of tension and misunderstanding that illustrate the existence of fragile, unfair, violent or fake contexts.

In the complexity of Santiago de Chile (and beyond) he looks for the raw material to construct his projects.Cities are one of the main territories for his research and function as expanded studios. Within them, he comes across the numerous contrasts generated by a neoliberal, hegemonic and unfair economic system: high unemployment and informal work, the mirror-clad office skyscrapers of multinationals and the financial market, precarious living conditions and the increasing implementation of protection architectures, segregation, vigilance and exclusion mechanisms. The artist takes it all in, he digests it all to synthesize and transform it into works whose main formal and conceptual reference are the Soviet avant-gardes and Bauhaus, for whom art was an emancipatory educational tool.

For three years, Hamilton crisscrossed the centre of Chile’s capital and photographed the various adaptations operated on tricycles to sell food, transport cargo, deliver goods, etc. The result is an inventory with over two hundred black and white images, which record improvisation and creativity, two synonyms of informality during periods of crisis. The project is completed by a real tricycl adapted by the artist and a wallpaper on which a graphic pattern emulating marble is printed. The modified tricycle features a light box with a large format photograph of Sanhattan neighbourhood, the name of Santiago’s financial district inspired by New York’s island borough. As for the print, which is replicated hundreds of times, it covers a whole wall within the exhibition space.

The group of three pieces forms a double portrait of the Chilean capital: on one side, a world of appearances, luxury and images; on the other, the hard reality of those who, above all else, must deal with the business of survival. Titled Santiago dérive [Santiago drift] (2006–2008), the name of the installation is a play on words referring to the artist’s drifts across the city streets, but also to the possibility of seeing two different Santiagos: from a superficial, illusory, outdoor and postcard viewpoint, or from what lies behind that, namelythe workers, drifting along with their pushcarts without any assurance, without any rights and without any solid possibility of coming upon terra firma tomorrow.

For Hamilton, work and its precarization are crucial issues. He emphasizes the implications of work’s technological and economic evolution, which has led to the flexibilization of labour laws, the extinction of several professions and, especially, to the increasing devaluation of manual labour. To address these activities, at the base of the social pyramid, Hamilton uses cold, hard, metallic and cutting instruments that are the opposite of the warmth, malleability and organicity of the human body. Workers, or their skilled hands, never appear in his works. In their invisibility, these hands end up being the metaphors for the foundations of classic liberalism as theorized in the mid-eighteenth century by Adam Smith, with his concept of the “invisible hand” that would regulate the market and the economy.

Interestingly, the traces of the gestures carried out by Hamilton in the production of his projects are also almost imperceptible. The surprise of seeing for the first time a Mondrian abstract painting in vivo and finding defects and imperfections in it, is absent here. The Chilean artist’s geometric compositions are not only extremely austere, but also impeccable, ordered, precise and clean. Perhaps he needs to work with machine-like precision and coolness to speak of a world erected by men with effort and sweat.

The works in the series Pinturas abrasivas [Abrasive paintings] (2014–2018) feature dozens of sandpaper implements, used by painters to remove undulations, glued to a canvas. Following the pattern of an orthogonal grid, the composition alludes to brick walls, sidewalks and floors. They are urban webs, which obey the logic and fittings of civil construction.

From a distance, the two-dimensional rectangle formed by the set of sandpapers is reminiscent of an abstract, monochromatic and uniform work such as Frank Stella’s “Black Paintings”, with concentric bands and stripes in black enamel house paint on raw canvas. Only when approaching Hamilton’s composition is it possible to perceive the harsh texture and the slight sheen of the less than noble material. From a tool used to aid in painting, sandpaper attains to a different status, as it becomes art and now turns its back to the wall. In the painting there is an implicit critique of the precarious work conditions entailed in manual labour, which translate into the harshness of the sandpaper, which hurts and cuts into the worker’s hands. Just like the abyss between an art painter and a wall painter.

On the floor of the exhibition space lies the work Red and Black Sun II (2018). A circle formed by painting spatulas placed side by side. Painted in the colours and diagonal slash of the red and black anarcho-syndicalism flag, the spatulas represent a new possibility of light and warmth, as workers unite in a struggle against class-privileges and for socio-economical equality. Arranged in a wheel, the tools are reminiscent of the configuration of aspace for political decision. The spatula handles, turned towards the outside of the wheel, are like the microphones that give a voice to the people and the workers.

In 1936, the year in which the popular fronts in France and Spain won, Denis de Rougemont already defended those who thought also with the hands. In the current context, in which democracy, the quest for equality and freedom are once more at stake, it is necessary, more than ever, to recall Rougemont and add the words of the great Brazilian poet Carlos Drummond de Andrade: “the present is so vast, let’s not be apart. Let’s not be too far apart, let’s go hand in hand.”

The opposing works Escape to Paradise (2004) and Black Frame (2018), made especially for the exhibition, have obvious formal differences, but strong conceptual closeness.

Formally, Escape to Paradise resorts to the manipulation of an easily recognizable everyday object, a welding mask, with photography. Black Frame, on the other hand, made from steel that is used in Chile as an element of protection of the walls and private property. At the conceptual level, Escape to Paradise eloquently refers to working conditions in the contemporary world, that mix dreams and hopes with frustration and melancholy. For its part, the minimalist Black Frame speaks of limits and division, but in a very beautiful and silent way.

These two works could be defined as allegories of contemporary life, how certain economic and social processes generate limits and frames to our vision of what is possible.