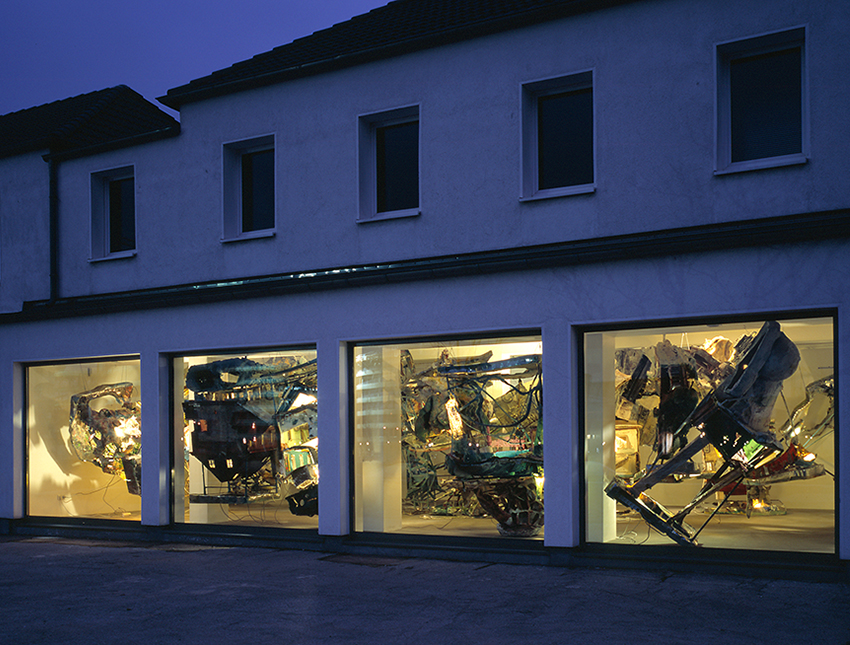 With these sculptures, Thomas Virnich has fulfilled a dream. Drifting between clouds androots, between temples or pyramids and space stations, which is to say between above and below, yesterday and tomorrow, are large sections of the two houses and garden where the sculptor works and lives with his family in Mönchengladbach. The artist had long pondered the idea of taking a closer look at his home – buildings of an old school from the nineteenth century – from a greater height. Though familiar with every corner, the spatial order of his own little world, viewed from above, became a tableau for unexpected discoveries and sculptural fantasies. The Fliegenden Katakomben (Flying Catacombs) affirm the artist’s own summary of his artistic approach: “I work biographically.” 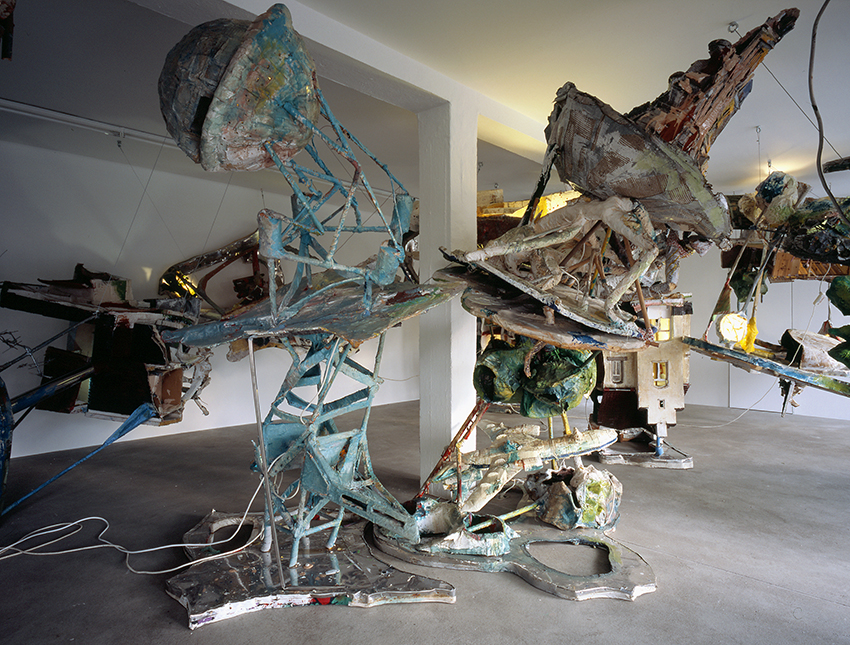 Virnich’s artistic tackling of a familiar domestic situation called for a fair amount of optimism and perseverance on his part, along with the transport of comprehensive quantities of cardboard, wood, glue and paints, light bulbs, broomsticks, sheet zinc, and so on. Prior to this, he had felt his way into the task by creating small, more manageable variants. Before committing to their risky execution on a 1:10 scale – his largest sculptural work to date – he decided to reproduce the buildings accurately and in their entirety, down to the last detail, as a model maker would. Later came the courtyard with all its corners, trees with found objects and sculptures placed between them, street lamps and light from the street lamps, the sky above, and finally the hidden spaces and objects under the roofs and in the ground, along with the memories and assumptions that are associated with everything: a universe full of entangled materials and ideas, a merging of reality and fiction.

Overhead observations had already repeatedly provided the sculptor with the necessary creative entrée, spurring a rivalry with reality. For example, in his rendering of the Earth a few years ago. In recreating its surface, the artist had to wonder whether the usual geography of the globe clings to a model representation that interprets our complex, very different views of the world in a one-sided and static way? The Earth, as we know, is changeable. The question prompted the sculptor to come up with alternatives, which is why he varied the usual distribution order of land and sea. Virnich made the world dissectable, enabling us to pull out its various components and examine how they relate to one other beneath the surface. Any change to an individual component affects the whole. Because Earth-related entropy triggers emotions, every change to the sculpture becomes an incalculable game, one that makes it difficult to predict the state of the world. With it, Virnich’s sculpture of the Earth becomes deceptively real.

The large, unsupported chunks of sculpture were created effortlessly and without a plan, left solely to the logic of the hand, the game, sensations and any bit of spontaneous inspiration. Virnich takes possession of reality and uses it as malleable matter; he follows the consequences of that choice wherever it takes him. His sculptural approach is characterized by spurts of euphoric exertion and action, nervousness and self-doubt. Even the remove of a few minutes could trigger spur-of-the-moment, creative decision-making on his part. Dramatic interventions and unrestrained affects follow spatial ideas that necessitate an emotional reaction, as these sculptures cannot be described in any rational way beforehand. The fragmentation and reassembly of parts stems not from contradictory processes, but from anecessary dualism. It is a method that pervades this sculptor’s oeuvre. And once again in the Flying Catacombs, the irrational becomes a genetic principle; the apparent monumentality of his subjects turns out to be a factor of ongoing uncertainty, destabilizing our perception. Yet the confused trajectories of their components and permanent collision can also be explained by the laws of scale and gravity.

Confronted with a growing abundance of civilizational shards and fragments, some sculptors dwell on the decorations of a self-referential rhetoric. It’s easy to lose sight of one’s own responsibility and where it ends, particularly where the origin of the shards is lost. And yet fragmentary contemporary sculpture, a category to which Thomas Virnich’s works also belong, asserts itself by credibly claiming the idea of a radically open sculpture. There is no doubt that so long as it fends off representational ambitions, its subjective symbolic power will diminish. It will inevitably assume the same, doctrinaire qualities held by the statuary and permanent monuments it claims to subvert.

Thomas Virnich denies us anything definitive. He deprives the found reality of originality through subjective simulation; he abnegates material fidelity and a sense of order. But his sculptures have a memory of all they have experienced and all the expectations they have yet to face. In this way, they are present: both in their creation and in their dissolution. Imbued with this characteristic, ongoing conflict, they contain additional information about our world in the manner of insertions that offer no ready-made solutions, that are unpredictable, provisional, at times defiant, yet wide open. They are the starting points for pathways that subvert our mental registries for order and beauty in all their presumably useless, disorienting disorder—and open up positive spaces for hope and possibility.