For millions of years

The exhibition was accompanied by a bilingual booklet with a text by Raimund Stecker and photography by Werner J. Hannappel. 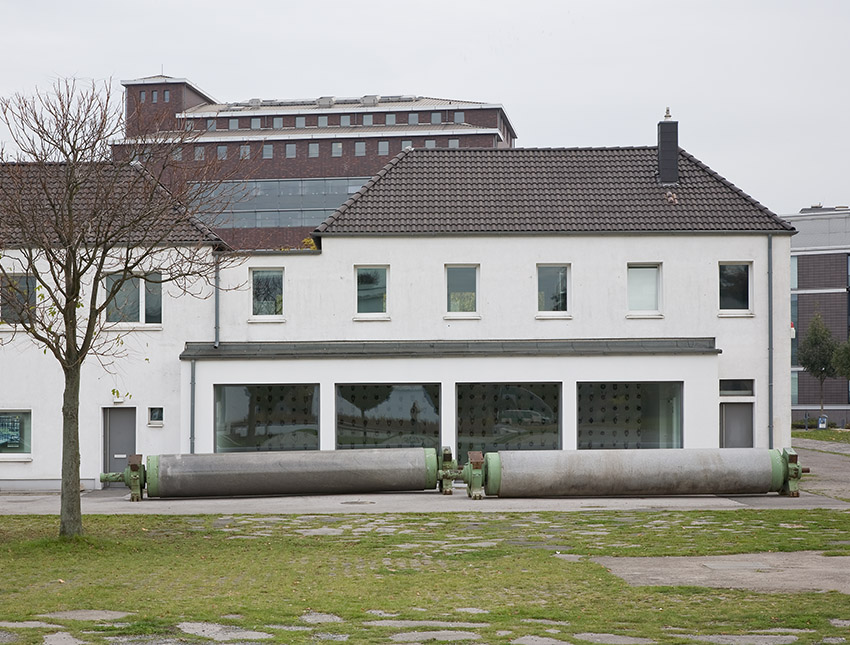 «The exhibition project comprising two granite rollers and about 200 to 300 antlers is like a journey through time. It starts with the beginnings of the Earth and allows us to risk a glimpse into the future as we respect the past.
The entire process of our Earth’s development is delineated with the genesis of the granite as a plutonic rock in the juxtaposition with relics of life forms, the deer antlers.
The deer, a striking animal in our region, has been able to preserve its features as a creature despite the many highs and lows now and in the past as regards the cohabitation between man and beast in our increasingly narrower cultural landscape.
The title For millions of years recalls the constant development for which the perfect cylindrical form of the granite rollers appears like a measure of time.
The stone is a witness of immeasurable dimensions and preserves a store of secrets within itself despite considerable and continuous scientific insights.
Mankind realizes all the more that the future also has origins.»

For millions of years…

Linking contentually unrelated matters by means of an artwork into a perceivable, an aesthetic context has a far-reaching tradition in the history of the visual arts, if not millions of years. People who have nothing to do with each other (anymore) apparently (still) sit compositionally united next to each other in Edgar Degas’s «The Absinthe Drinker» from 1875/76, for example, in a highly complex balanced total pictorial contex.[i] But the compositional harmony does not correspond to the portrayed scene. The non-communication between the two persons sitting only in the proximity of each other is unquestionably the picture’s subject matter. But the scenic disparity is still not constitutive for the aesthetic form. Still because the collage principle had not yet been established in the late nineteenth century – i.e. the principle that also links contentually unrelated matters in a compositionally unrelated fashion within an artificial whole that is thus able to implant itself in our consciousness.

Christiane Möbus is naturally not satisfied with this historical form of representing unrelated and contradictory matters – and this has been the case since the start of her artistic career.[ii] She thus always attempts rather to place the viewer in collaged non-contexts as it were – and in fact even locate him more evidently in the actualities of non-contexts over the course of her work’s development.

This is also the case in her installation For millions of years. Two stone rollers with mountings lie outside in the exterior space in front of the Window– Gallery DKM. Stone rollers which were probably once responsible for smoothing the surface of paper in the calender of a paper machine that, seen from the side, indeed project the dynamics of Paul Klee’s revolutionary viaducts onto the viewer’s inner eye. These rollers are made of granite. Length 8m. Diameter 1.10m. Weight 26t. Hundreds of deer antlers are installed inside behind the gallery’s windows. They come from untitled as well as aristocratic hunting trophy collections. Individual antlers are inscribed with noble coats of arms; in some cases, the jaws of the animals who were shot at (or better: shot dead) are attached. Many of them are even labeled on the reverses of the small stop boards and can thus be dated to the late nineteenth century.

Resembling the graves of the fallen at military cemeteries on first sight, Christiane Möbus hung the antlers «in rank and file» on the wall. She thus forced the trophies into a system that on the one hand stands in a profound contrast to the behavior of the animals to which the antlers once belonged and the individuality of the antlers as they have grown over time and can be seen today on the other. But it is apparently precisely this individuality that concerns Christiane Möbus. We do not find a simply structured all-over antler effect in the Duisburg installation, one that exhausts itself in a staccato-like uniformity that consequently only provides the individual part with the importance of a subordinate part (the soldier on the graveyards of the fallen). In For millions of years we find rather a collection of documentations on individualities whose individual pieces are moved by Christiane Möbus to a distance relative to each other in such a manner that the viewers are consistently prompted to an encounter with an entity, with an individual.

Each one appears fragile and individualized like a fingerprint. Obviously delicate in their respective current condition, the trophies accordingly seem to refer back to the historical helplessness that each life form was exposed to in the confrontation with another, ultimately stronger life form. This immediacy and individuation of the killed beings cannot fail to move us – killed beings that not least demonstrate hunting success.

And the monumental monolithic stone rollers outside? In formal terms, they could be seen as a massive counterbalance to the faded sensitivity. And the very sensitive smoothness of the surface intended to be felt might be able to direct the comparative glance to vulnerability. But a context that goes over and above the intended concomitance might not be apparent at first glance.

Unrelated matters are thus indisputably left in their non-context by Christiane Möbus in this installation. While elements must «harmonize» with each other in chemistry in order for a new molecule to be created, and while harmonies must also be formed in a sociological context of groups, if one still wishes to speak of a group, art is apparently free of all of these harmony necessities. A contingent juxtaposition of unrelated matters is enough here to imagine appearing syntheses – and hence to allow contexts to appear.

The deer antlers and the calender rollers have only been in the now doubtlessly altogether unalterable unit established by Christiane Möbus for a short while. Nothing is to be changed; the entirety is owed solely to its own unique nowness and inherent being. «In the case of a direct encounter between dead and living material,» Christiane Möbus notes, «a confrontation would probably have had a destructive effect». But this would then not have been a piece by her. She always deliberately sets each material in accordance with its own material properties on its own track – «time and parallel shifted according to the biogenesis of our planet and its inhabitants,» as she says. We are thus located at a spatially as well as temporally extremely tangential point of contact. One that is owed to a brief moment, an instant – a constellation that exists only in the present and whose image we viewers become witness to in this way.