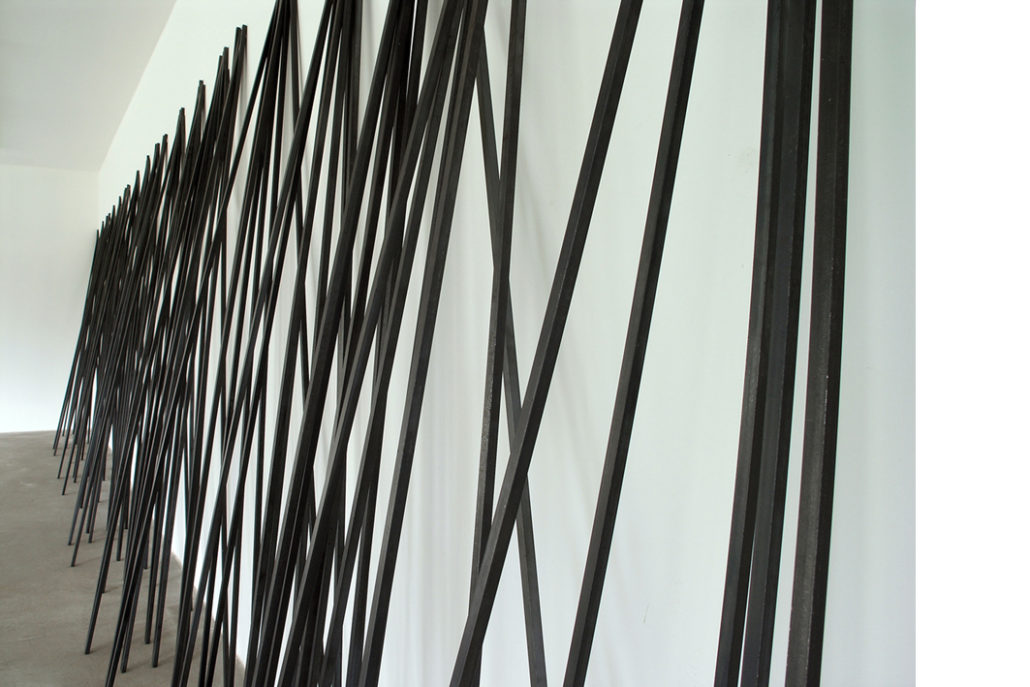 Gunter Frentzel installs a sculpture at DKM Foundation. It is a piece that occupies the entire back wall of the space, offering any number of options in terms of experience. The motif composed on the wall builds on a complex organizational principle that, in addition to geometric, drawing-like and spatial components, also emphasizes the relationship with the audience. The artist has placed individual iron rods at regular intervals, at a specific angular inclination and parallel to one other, such that they lean flat against the wall. Several staggered rows of rods jut out from the wall and extend into the space. Cross-connections of rods can be seen between the layers. The pattern, which extends across the entire surface, takes on a life of its own as soon as viewers move back and forth in front of the work. The rods appear to shift, condensing at some points before dissolving. They interlock and intertwine. They form perspective-distorting constellations. A number of facets open up depending on where the viewer is standing or moving – wherever they find themselves in space. The changes in the foreground mask those in the background, as if there were no underlying rhythm or recognizable regularity to what is happening; order slips into chaos, clarity into the incomprehensible.

Frentzel realized his first wall installation in 2003, for a show at Baukunst Galerie in Cologne. On a short section of wall, he arranged a number of rods according to clearly-defined specifications. The simple organization yielded an unexpectedly breathtaking range of optical effects. Since then, the imagery has become increasingly complex, the patterns more intricate. And yet a closer look reveals that this installation, too – like all of Frentzel’s earlier works – is based on a clearly-recognizable structure; the changes are perceptual in nature. Regarding it conjures the widest range of associations as well: One could think, for example, that Frentzel has translated invisible information into the visual spectrum, or a mathematical structure into sculpture. It also evokes an analogy to music. Its structure recalls minimal music, for instance, a genre that develops ever-new, meditative variations over an underlying melody.

Frentzel, winner of the Solothurn Art Prize, has mastered the austere material. The artist first began experimenting with the standardized, unpretentious industrial steel rods in 1997, and has since produced countless sculptural creations by simply layering, stacking, hanging or leaning them against the wall. The forms, with their often visually difficult-to-fathom patterns generated by alternating layers of material and glimpses through those layers, are frequently so evocative as to override principles of construction. In the beginning, he would lay a round or square black metal plate on the floor, then arrange one end of the rods around the contours of the plate while leaning the other end against the wall. He later omitted the metal plates and arranged them freehand. The latter method resulted in fan-shaped wall works in which several rods stand close together, the upper end leaning against the wall, the lower end arranged along a line running diagonal to it. The slight rotation creates a tension; an otherwise rigid material appears to vibrate. In the sculptures constructed using geometric floor plans, he shifts the rods inward by their diameter in two opposite corners as he layers. The massive, yet fragile- looking structures are in danger of collapsing. Frentzel pushes statics to the extreme. Every rod he adds to a fan-shaped floor work, for example, could well start to slide. His constructions are always conditioned by the structural possibilities of the material. The artist uses no brackets or fasteners of any kind and sets no welding points to fix the work. The sculptures support themselves. This is also true of the installation shown here, a work that consists of two hundred rods that hold each other in subtle balance. Should only two rods be removed, the entire installation would collapse.

Gunter Frentzel always thinks of sculpture in the context of space. He considers how an autonomous sculpture might be realized without subordinating itself to the space. Or vice versa: he thinks about how a space might be developed with sculpture. The new work tests new possibilities. By placing the rods in dialogue with the wall, Frentzel expands the discipline’s scope to encompass drawing-like wall installations. Like the Minimal artists, Frentzel deals in the objecthood of art. He eliminates arbitrariness and coincidence. He pragmatically and consistently follows his own intuition and sense of beauty, uncovering new, surprising forms in the process.