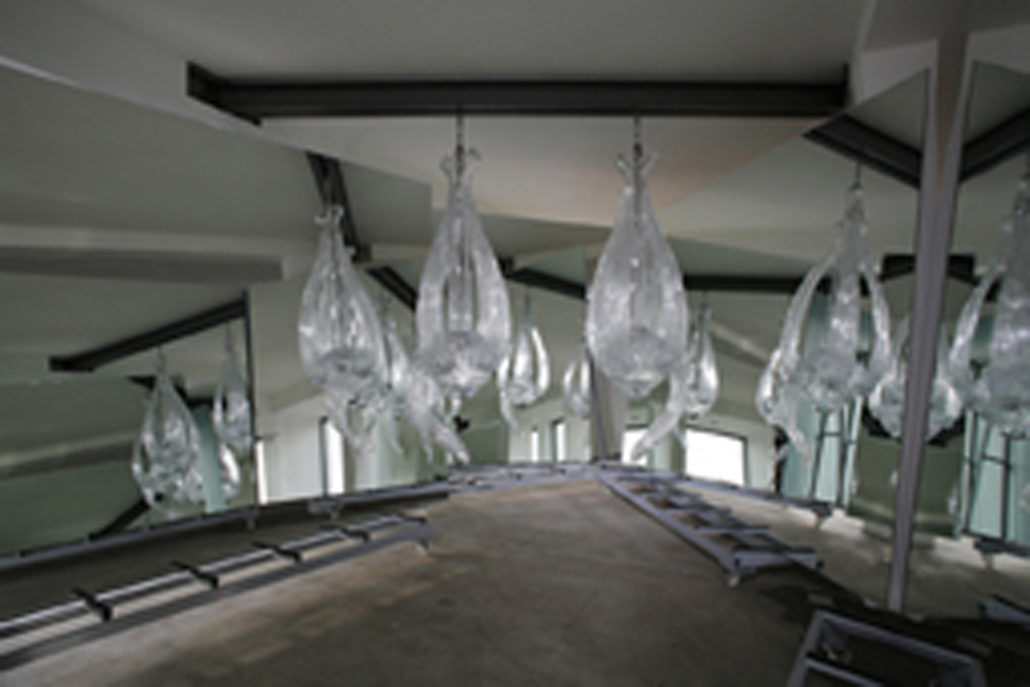 Hindsight BiasSee!—and do not believe you have known it all along

The window gallery at Foundation DKM in Duisburg’s Inner Harbor is, in fact, closed during Raimund Kummer’s exhibition. Entitled Hindsight Bias – warum der Mensch im Nachhinein glaubt, vorher schon alles gewusst zu haben (Hindsight Bias: Why People Believe in Hindsight They Knew Everything Beforehand), the view is obstructed at the very spot where people would otherwise vie for a glimpse that is at once fleeting and intense. The space’s glazed facade is blocked with mirrors on rollable frames. Consequently, hardly any of the mirrors are recognizable as mirrors, as the observer sees them only from the back. From a distance, the four windows appear as though installation for the upcoming exhibition was still ongoing, as if potential exhibits were still standing around, out of place. It is only on approach that an obviously composed mirror image finally comes into view. Sculptures of two enormous glass eyes, each nearly two meters high, attached to their respective nerve cords, reflect the viewer’s gaze from the outside. Upon coming closer, the eyes multiply into a pair, three, five, seven, eleven, thirteen… «pairs of his eyes», as Raimund Kummer calls them, since they are sculptures modeled on human eyes, complete with lenses, muscles, and nerve cords.

The space appears filled to the brim with these huge, colorlessly transparent glass eyes: organs that reflect the light shining on them in countless points, giving them the look of Venetian chandeliers. Those familiar with the artist’s work know comparable sculptures and ensembles, know of Kummer’s thematic quantum continuum, which is to approach the physical conditions of our sight in a sculptural way. But in contrast to previously encountered installations, the one in Duisburg, which he calls «Versuchsanordnung» (Experimental Arrangement), has five mirrors positioned around the pair of eyes that almost entirely prevent a direct encounter between sculpture and viewer – a fact that applies at least to the exhibition space understood as a showroom gallery, as a showcase for artworks that are to be viewed via windows from the outside. It is only by entering the exhibition space (which is not typical for shows at this venue) that sculpture and viewer meet «eye to eye». Viewed from the outside the gallery, any glimpse of the eyes is necessarily a mirrored one.

Is this a re-vision of sculptural forms of perception? What does Kummer achieve by mirroring the vision of his actual sculptures, his glass ocular organs? In a reference to the space of the showroom gallery, he subtly reverses the simple relationship between outside and inside. Indeed, by creating an inner, mirrored space out of five mirrors, the inside also becomes an outside – an outside on the inside. With regard to the sculptures themselves, it should be noted that their transparency has the effect that they seamlessly multiply and reflect back to the mirrors that also reflect them, thus making it almost impossible to differentiate between the seen sculpture and what «only» appears as its reflection. The ultimate consequence is that the reality of the sculpture disappears in favor of its mirror-image reflection, which in turn means that it is no longer possible to speak of a sculpture as a factual thing, since its showing-itself always depends on that which is both situationally and currently reflected along with it. In a sense, the fact of sculpture loses its significance in favor of its speculum – a term, by the way, that is inscribed in the word «speculation» and (given the «experimental arrangement» in Duisburg), can also be understood programmatically here. One can speculate, for example, from photographs of Kummer’s installation: What is the police car doing in a piece by this old anarchist, what are the construction crane, the spotlight, the camera on the tripod, the photographer, the viewer, etc., doing?

Thus considered, a look in the mirror is unquestionably not only for the vain. It isn’t just Narcissus who desires it, fascinated as he is by his own reflection; it isn’t just Venus who demands it as proof of her beauty; nor is it only the age-phobic Dorian Gray who shies away from it. The look in the mirror – likewise the mirroring of looks – involves much more. It contains a complexity that can never be fully known, disguised as they are by visually manifested phenomena. For example, if I see myself reflected as a viewer, is it my reflection I am looking at or is my reflection looking at me…? (By the way, if I want to take a picture of my reflection, then the distance of my camera’s lens has to be twice the distance to the mirror). And anyway: Who is this person who synchronously repeats my movements, who wears the same clothes as me and third parties claim looks like me? And where does he stand, this person in front of me who has what I have behind me behind him, but whose rear wall is not as perpendicular as the one that closes off the room behind me? Who actually creates the sculpture? The question could be asked with regard to Giuseppe Penone’s Rovesciare gli occhi (Reversing One’s Eyes). Is it created by Penone, who artist mirrored his eyes in 1970, or by the person who looks into his eyes and is reflected in their reflection?

Every mirror – and even more so, several mirrors – begins an infinite game. I look into a mirror that is reflected in a parallel one, and infinity appears. I imagine realities that are not there where I see them, because they are only reflected. Non-existent dimensions are feigned by reflecting distant expanses into the narrow. Polyperspectivist spaces open up when two or even more mirrors stand at different angles to each other – spaces like those painted by Cubism and Futurism, by Ernst Ludwig Kirchner and Ludwig Meidner.

NEBEL (fog) – LEBEN (life), Maurice Béjart’s Mephisto in his choreographed version of Faust was terrified when he was shown the German word LEBEN (life) mirrored, read from right to left: NEBEL (fog) Now, in 2007, Raimund Kummer – whose practice always deals with seeing as an act-conscious moment of orientation, both formally and in terms of content – also mirrors the hanging of two of his gigantic eyes in space, thereby achieving a heightened visual experience that inevitably places vision squarely on its own, albeit more precarious, «feet». The viewer cautiously feels their way through the interior, mirrored space in the exhibition room, with five slanted mirrors at its sides and glass eyes at its center. The perplexing sight determines the physical behavior of the person viewing it. The floor «floats» underfoot, disturbing one’s sense of equilibrium. Any footsteps are hesitant, since the mirrors distort the perspective of the floor and also reflect them in a visually uneven way. A tentative search for footing becomes manifestly impossible, as surfaces on the sides suggest instability.

Entering the installation, we find the familiar ortogonals of the given exhibition space visually tipping out of balance, both vertically and perpendicular. One imagines oneself in an oversized kaleidoscope. Only the hanging eyes and the double T-beam holding them lend support to Piet Mondrian’s thesis that the world is stably organized at right angles to the horizontal. Everything else evades, escapes, pushes. Collapsing compartments of space overtake the viewer in Kummer’s installation – all is shifted.

Mirror rooms are created in this way – they are to be called «mirror rooms» so as to convey the expansion vis-à-vis mirror «reflections». Indeed, it is a three-dimensional phenomenon that Raimund Kummer created, one that allows us to see an infinite number of two- dimensional images. The number of two-dimensional picture planes through Leon Battista Alberti’s visual pyramids is – in addition to respective viewing positions in front of the Thing to be Seen – once again exponentiated by the pyramids, which reflect into the mirrored space from each specular point on the mirrors.

Nevertheless, what I have described may not sound as spectacular as the experience of the installation is: Well, that’s mirrors! Everybody has their experiences with reflections, with deceptions, with perceptions… We think we know a lot already. And yet: The sun still rises (at least linguistically), though we’ve known for 500 years that it is fact the Earth rotating towards or away from it. A similar faux pas comes with the human tendency to be retrospectively convinced they already knew something before it occurred. Similar words might describe Kummer’s Hindsight Bias. Nevertheless, the reproach of no longer sufficiently submitting to the authentic events required to create unique experiences is one that will forever be tied to the ignorant. After all, the polyperspectival spatial worlds that the Cubists and Futurists, Kirchner, Meidner, and a few others have already captured in highly complex pictorial works – Raimund Kummer de facto gives us the opportunity to experience them spatially and, in every mirror, he multiplies them once again in all their complexity. Which is to say: The five mirrors open up thousands and thousands of perspectives. To see all of them, to remember them later and to claim to know about them would be to keep Sisyphus’s boulder on the mountain. What reflected deception! Thus understood, the pair of glass eyes at the center of the mirrored room turns out to be the moment of content countering Raimund Kummer’s subtitle. And the central imperative of the DKM installation in Duisburg: See!