A broad spectrum of work is represented in the DKM Collection’s Ancient Art area: from classical Greco-Roman antiquity to the arts and crafts of ancient Egypt, animal vessels and bronzes from Amlash in what is now northwestern Iran, to Gandhara (Pakistan / Afghanistan) statues, statue fragments and reliefs and a number of pieces from India. Its radius spans further to include Buddha heads and busts from Ayutthaya, the ancient capital of Siam (Thailand), ceramics and sculptures from the Khmer in Cambodia, but most notably numerous figurines, statues, statue fragments, ancestral portraits, scholars’ rocks and porcelain from China with a special emphasis on the Han, Wei, Northern Qi and Tang Dynasties (206 BCE – 968 CE). Japanese art is essentially limited to the 19th century. 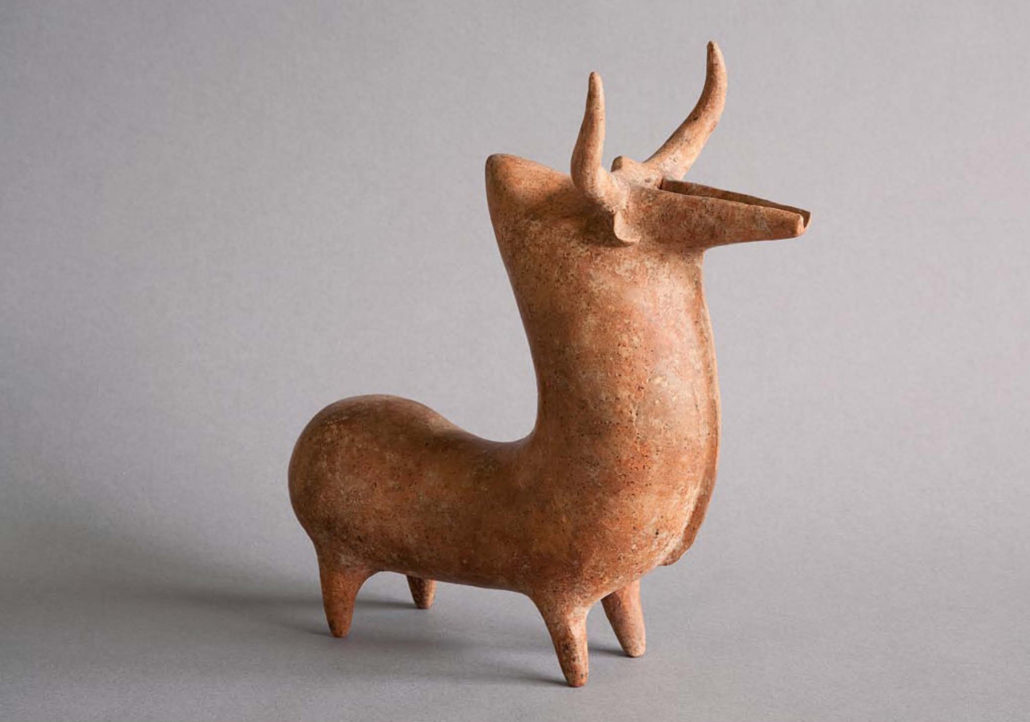 Classical antiquity is represented with a few works in the collection (fragments of marble statues and ceramics), though there is a stronger focus on ancient Egyptian art. The majority of the inventory is on permanent loan to the Antikenmuseum und Sammlung Ludwig in Basel, Switzerland, including the relief fragment (head) of an official (Old Kingdom, 2345 – 2181 BCE), the fragment (legs) of a statue of Amenhotep III (New Kingdom, 18th Dynasty, 1423 – 1365 BCE) and a bronze Apis Bull (late period, 5 – 4th century BCE). Meanwhile several vessels from various stone materials are also on display in the Museum DKM (up to 3000 BCE), including an Osiris statuette, several ibis sarcophagi and a rare copper sarcophagus for a shrew 400 – 300 BCE). Cultic aspects certainly played a role in the making of clay vessels in the shape of animals, animal heads or animal figures, or animal forms in copper alloy dating from 1250 to the 1st century BCE from around the city of Amlash (Prov. Gilan).

According to Quagliotti, the term “Gandhara” refers to the region where the Kabul River flows into the Indus, the vale of the Peshawar to the North along with the adjoining Swat and Bunner mountains. Gandhara art emerged from the meeting of Buddhism and Hellenism (in the far wake of Alexander the Great), a style of figurative art that continued from the beginning of our era to the 8th – 9th century. Originating in the region that gave it its name, it spread over the northwestern part of the Indian subcontinent and into Afghanistan. In Gandharan art the Buddha, otherwise known as Siddhartha or “The Enlightened One”, is often shown as a standalone sculpture or in narrative reliefs depicting various episodes of his life and work. These reliefs were often objects of meditation, frequently arranged around the walls of a stupa. Initially a simple burial mound, with early Buddhism the stupas became a shrine with a dome to protect relics of the Buddha or of prominent monks. Bodhisattwas were also often depicted as statues. The bodhisattwa is a consummate, perfect being who, having already reached nirvana, is filled with pity and voluntarily returns to the world of man to help them find the way to enlightenment. One bodhisattwa is dressed as a prince.

The collection includes several statues and statue fragments of Buddha and bodhisattwas, as well as a series of scenic reliefs showing the life of Buddha, a small stupa in pieces and a number of finely-crafted stone vessels. The Hellenistic influence is noticeable in the figures’ contrapposto, hard-cut nose, eyebrows, eyelids and lips.

A linga from the 11th to 12th century is from also India. It is a piller that is shaped as rectangle at the bottom, octagonal in the middle and round at the top. While the lower and middle third are roughly cut, the upper third is finely polished and adorned with high reliefs of four heads. All four heads with a third eye on the forehead denote Shiva, the fearful crowned head Aghora. The towering hair on the other three heads symbolizes Shiva as Mahyogin and as dhurjattin (who “carries a burden in his hair’). A linga can take the form of a phallus to illustrate the Shiva’s life-giving power. The collection also includes two latticed screens (jali) from around 1700, the Mughal period.

A photograph by Gundlach shows the head of a young Cambodian next to the head of an old Khmer statue. It is surprising to see how the ethnic group from the historic, 9th to 15th century Khmer Empire (centered in Angkor Wat) has been preserved to this day: with their their broad forhead, heavy cheekbones and protruding jaw, both faces match in an almost rectangular facial shape. In addition to numerous clay vessels and ceramic fragments, the collection inventory also includes a number of stone sculptures.

The Japanese art collection includes a 12th century statue of a Shinto priest, a 12th century home altar with the bodhisattva Jizô and ceramics, scroll paintings and calligraphy from the 19th century. Many of the scroll paintings, ceramics and calligraphies come from the hand of Otagaki Rengetsu (1791 – 1875), a remarkable woman who emerged as a poet and painter and continued to be active as an artist after becoming a nun at age 40.

The high quality and number of objects of various types make Chinese art an especially important part of the collection. A procession of 15 riders and a row of 16 foot soldiers can be traced to the Han Dynasty period (206 BCE – 220 CE), which governed China for over 400 years (making it the longest period of rule) and bestowed China with an economic and cultural golden age. The Empire’s great unifier and first Emperor Qin Shihuang Di (221 – 210 BCE) later inherited the throne; his own Qin Dynasty ended soon after him in 206 BCE. The Han Dynasty took over a unified empire with consistent laws throughout the land, enforced by city officials and developed by a branching network of roads, each with a uniform cart track and showing a standard set of weights and measurements. The prevailing worldview was Confucianism, a state ethic of loyalty and piety, super- and subordination that guaranteed upper class superiority even in the afterlife. Funerary and ancestor cults were therefore a privelege of the elite.

The Empire collapsed after the Han period the 3rd century. Meanwhile Buddhism began its gentle spread throughout China, its monasteries becoming the center of intellectual, cultural and economic thought. Buddhism enjoyed enormous popularity as an individual doctrine of salvation intended to lead people to the purity of nirvana, and continued for about a century in China before being violently suppressed and eventually eliminated by the Tang- and Song Dynasties 618 – 907, 960 – 1279 CE). Buddhism enjoyed a heydey during the Northern Qi Dynasty (550 – 577 CE) and Sui Dynasty (581 – 618 CE), unifying the Chinese Empire once again. The collection houses many captivatingly beautiful Buddha statues and heads made out of limestone, including a monumental Buddha head of white marble (90 cm tall) showing traces of color paint.

From the Wei Dynasty – which ruled only part of the Empire – the collection includes a procession of 53 figures from a funerary object (following the Confucian traditions of the Han Dynasty), which out lived the high government officials and military and fought for Buddhism in the Tang- and Song Dynasty period. The collection owns an oustanding collection of work from the Tang Dynasty in particular, including the statue of a temple guard with a terrifying facial expression and highly realistic animal sculptures made of stone.

Scholars’ stones have survived from the Song era, objects for the meditative gaze and wandering eyes across a miniature landscape resting on flat, wooden pedestals. The examples seen in the collection date from the Qing Dynasty (18th – 19th century). Other objects from this time include several large scrolls showing ancestral portraits and other esteemed individuals in magnificent ceremonial robes. The Chinese part of the collection also acquired several historical furnishings and is completed by a variety of porcelain pieces dating from the Song period on. These porcelain works are noteworthy on account of their highly developed sense of form, a sensibility that has continued to influence the best of design to this day.