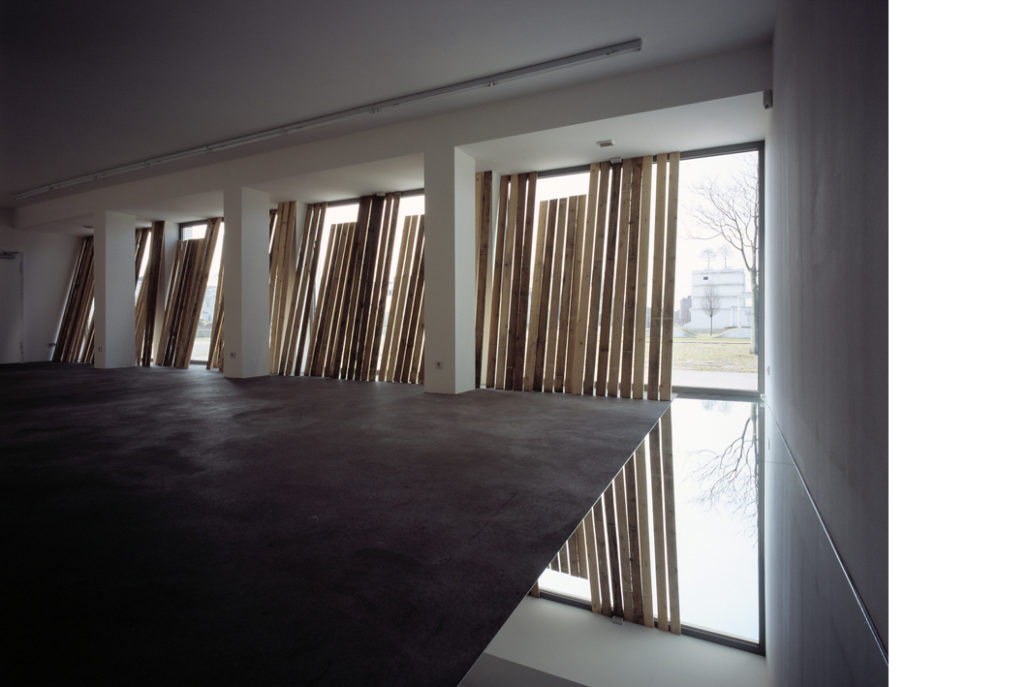 Erich Reusch overcame the limitations of the sculptural form starting in the late 1950s, opening it up to space, to the unlimited. This overcoming of traditional sculpture, defined by delimitation (modeling), was a goal shared by many sculptors at the time. Reusch differs from them in that he did not open up sculpture itself, break it open, fragment it, deprive it of its volume. Instead, he opened the eye to it, directing it into unbounded space. The material forms remained calm, straightforward, often even closed. But they moved out of the center of the field of vision, they became «decentralized» Open space, which is not visible in itself, came into view — as a positive counterpart to the material forms, as direction, interspace, tension and an open field of reference.

There are some — rare — works by Reusch in which he did not set the three-dimensional form in relation to the open exterior space, but rather made the interior space itself as a volume (bounded by walls) the subject. Here, too, he opened up the boundaries, albeit not by breaking down the walls, but by depriving the gaze directed into this space of its limiting orientation. Space opened up not as a physical given, but as a visual experience.

In dissolving the boundaries of interior space, Reusch’s approach is formally quite different from that of dissipating the boundaries of material sculpture in open space. Instead of merely creating an «installation» that still accepts the closed space as a visual fact, he withdraws this interior space (as an enclosure) from the viewer’s gaze in its entirety. As early as July 27, 1967, the Frankfurter Allgemeine Zeitung reported on a design that reflects Reusch’s «wish» to be allowed to “direct a single sculpture through the stairwell, through the windows into the open air”: a billow of a myriad of square steel tubes that visually floods the interior space as a limited reality. In 1972, Reusch obstructed the central hall of the Dortmund Museum am Ostwall with an impenetrable wall of raw boards up to 50 cm below the ceiling; inside, unlocalizable sounds reinforced the experience of an interior space that was present and recognizable, but not visually detectable (Verborgener Raum / Hidden Space). The unlimited view the visitor experiences as an opening at Reusch’s exterior sculptures was disrupted, interrupted, barred here. The wall of boards brought the interior so close to the viewer that they lost sight of the distancing, neutralizing overall view.

The work Nichtraum · Verborgener Raum · Freiheit des Raumes (Non-Space · Hidden Space· Freedom of Space) deprives the observer of a clear view by other means: it robs them of space as orientation, as a comprehensible structure of height, width, and depth. The work appears bulky; space is no longer something that is recognizable, that offers coordinates and conditions from which to approach the work. The work is itself the space. But to what extent is it still «space» when it loses its preconditions of dimension and abstract attributions?

The conditions are the shop-window-like glass front, the terminal rear wall, the enclosing side walls, floor and ceiling. The glass façade is largely obscured by rough boards leaning against it from the inside; the boards come into view without enclosing an interior. The back wall features «paintings», the canvas of which are almost completely cut out; we look into the paintings onto the wall, which turns into a component of their — extracted — pictorial world. The left wall loses its delimiting function; it continues downward in a mirror surface that lies on the floor in front of it, connecting with a vertical direction of five neon lit lines on the back wall, which also continue in the mirror. The room loses its unity through the analogies of its boundaries. Hence it does not enter seamlessly into the abstract «visual form» of space, which the viewer brings with them as a precondition of any experience of reality. The interior space locks, with all its walls, against the abstracting, orienting, referencing appropriation: as Nichtraum (non-space), it becomes frighteningly tangible.

This is true of both the view from the outside through the glazed wall and the view from the inside. There is no angle, no view from which what converges in this space can be taken as an optical correspondence. The experience of components drifting apart undermines any «picture» one might want to make for oneself — from whatever vantage point. This also applies to the effect of the light falling in between the boards, which likewise does not create an «image» here, but brings in the outside as a visually striking counter-element to the obstructing boards.

The limitations are deprived of their coherence in a simple, smooth, intelligible space. Not submitting to the expectations, opposing the quick sense of being satisfied with what one sees, not merely looking at something, but making the gaze itself perceptible, against all habit: that is disturbing. And it is only in the disturbance of given conditions, in the breaking-open of one’s perception, that «freedom» (of space) can be achieved.