The Museum DKM presents the extraordinary collection of historical kimonos by Yoshiko Inui (JP). Fashion reveals the drama of Japan’s rapid modernization around 1900 after its encounter with the West.
The kimonos will be shown together with contemporary works by Yu Araki (JP), Erika Kobayashi (JP), Jong Ok Ri (JP/KR), Kei Takemura (JP), Yuichiro Tamura (JP).

The exhibition is a joint project by Roger M. Buergel and the Foundation DKM. 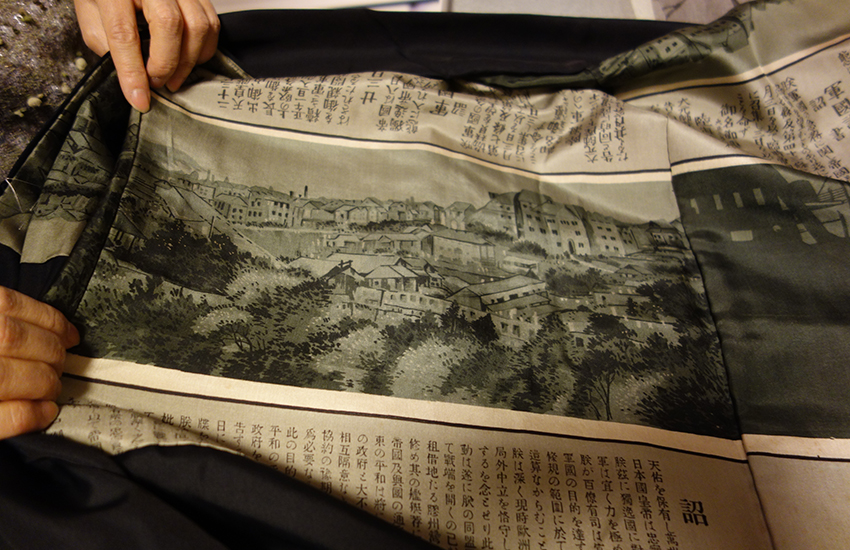 It was a good 160 years ago that Japan reinvented itself. There was no alternative for the island empire, after all, the Western powers were at the door – with gunboats and a catalog of demands. And so began a historically unprecedented process of rapid modernization that encompassed all aspects of Japanese life: from family and gender relations to the educational system (school and university), the political constitution and administration, to industry and the military. As always, culture had the difficult task of mediating the stark tensions between tradition and innovation. This is why it is possible to reconstruct the history of modern Japan based on just one, albeit unique, item of clothing: the kimono.

Like the Imperial House, the kimono is a constant of Japanese life; it remains essentially the same. Precisely because the kimono does not alter its shape, the patterns that adorn it must change. «Exciting patterns» (this is what omoshirogara means) began to appear towards the end of the 19th century, when fashion also began to incorporate modernity: railways, battleships, airplanes, cinema, Mickey Mouse, postcards, or even newspaper reports of military exploits. If the patterns of the 1920s celebrated an optimistic internationalism with zeppelins and the Olympic Games, the the colors and symbols darken in the 1930s as Japan began dealings with Nazi Germany and Fascist Italy.

OMOSHIROGARA presents the collection of the Japanese textile historian and undisputed expert in the field, Yoshiko Inui (Prof.em., Tokai University, Sapporo [JP]). The exhibition was conceived by Yoshiko Inui and Roger M. Buergel, with academic advice from Hans B. Thomsen (Professor of East Asian Art History at the University of Zurich).

In addition to the kimonos from the Inui Collection, OMOSHIROGARA shows works by contemporary artists Yu Araki, Erika Kobayashi, Jong Ok Ri, Kei Takemura and Yuichiro Tamura. These works, selected by Miwa Negoro and Mariko Mikami, are an indispensable introduction to the afterlife of the crucial period of Japanese history between the Meiji Restoration (from 1868) and the end of the Pacific War (1945).

OMOSHIROGARA is the second exhibition Roger M. Buergel is developing for Museum DKM (the first, Barely Something (2010), focused on Ai Weiwei’s artistic combination of Western modernism and Chinese tradition). In the coming years, further exhibitions by Buergel are planned for Museum DKM that address global interconnections between Asia, Africa, and Europe. 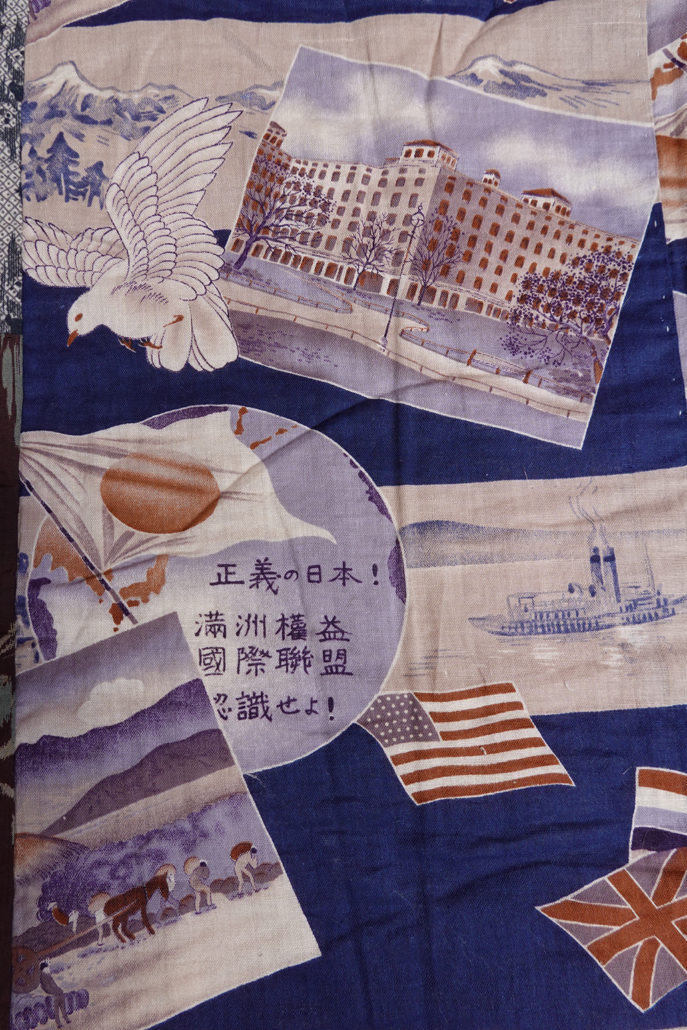 1933: Being accused by the League of Nations to have annexed Manchuria (Manchukuo in Japanese) illegally, the Japanese government rejected the Commission’s findings and withdrew from the League in March 1933. Apart from the white dove, the kimono-pattern shows the League of Nations-building in Geneva; steamboats on Lake Geneva; agricultural work on the plains of Manchuria; a map with a Japan that extends to Korea and Northeast China plus the flags of the US and GB with the flag of Manchukuo, Japan´s puppet state. 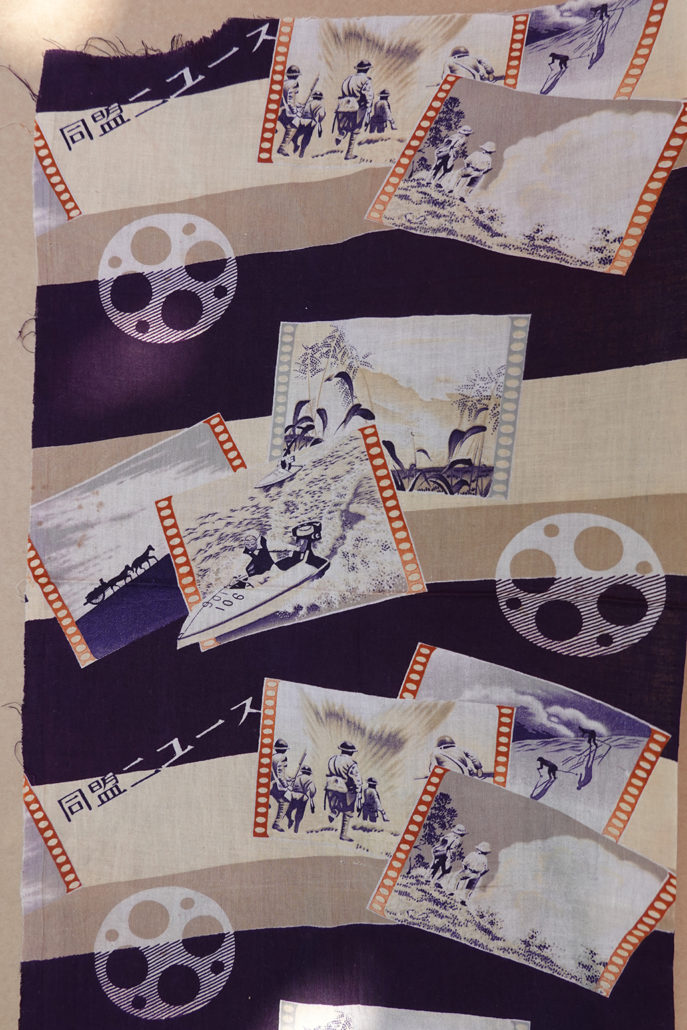 Film follows history on a pattern from the 1930s. 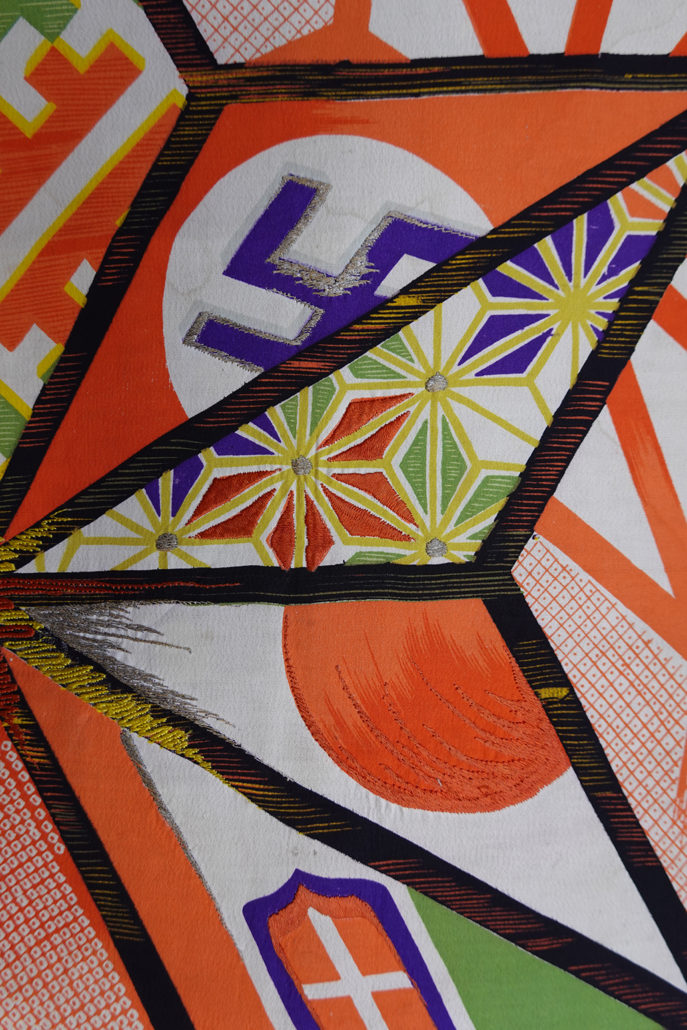 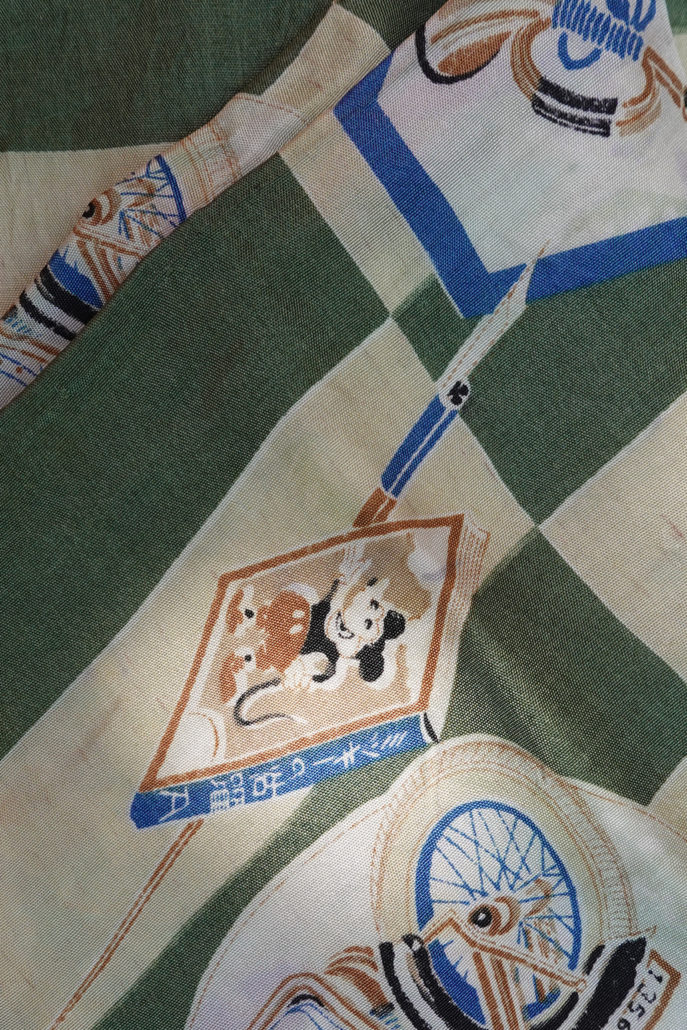 Mickey Mouse being welcomed in the Empire of Manga, kimono-pattern 1920s. 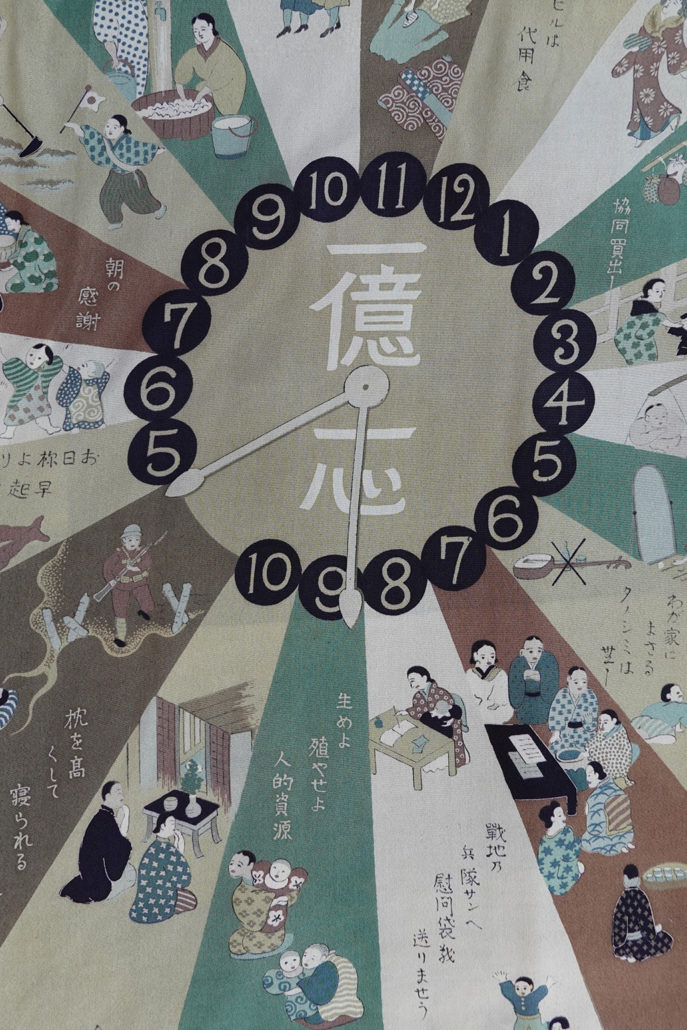 How to live a proper Japanese life from dawn to dusk, kimono-pattern 1930s.

This exhibition is sponsored and suported: