The exhibition was accompanied by a bilingual booklet with a text by Stefanie Hessler and photography by Werner J. Hannappel. 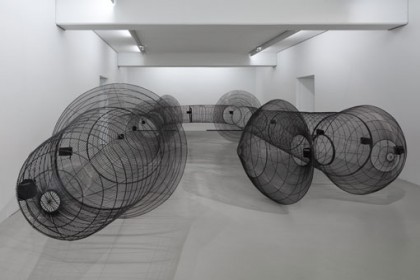 In the Museum DKM the spatial installation Paisaje Ausentado [Absent Landscape] by the Chilean artist Cristián Salineros was shown in 2012. Like an organic structure, the monumental shape consisting of the wire mesh of bird cages walled through an exhibition space of about 100 square meters and pushed itself like a wedge into the visitor’s path. Feeding containers and delicate bird sounds heard from inside the sculpture confirmed the appearance of a cage. With his work, which was conceived especially for the Museum DKM, the sculptor, who was born in Santiago (1969), created a connection between architecture, sculpture, and nature, which repeatedly reveals new perspectives in the course of the walk and triggers various associations with the viewer.

With the spatial installation Paisaje Ausentado, the Foundation DKM showed the position of a contemporary Chilean artist for the fourth time. The works of the sculptor Cristián Salineros, who was born in Santiago in 1969, are often reminiscent of familiar everyday objects, but at the same time they are clearly artistically designed forms. For an exhibition space of the Museum DKM, Salineros has created a twelve-metre-long work made from the wire mesh of bird cages. In organic-looking, swelling and decongesting volumes as well as in tubular extents, it winds through the room, describing an arc, and forces the viewer to grasp them in a moving way.

Despite their monumentality, Salineros’s sculptures never seem heavy or massive because of his fondness for braided, grid-like structures. By avoiding base or plinth, it brings the viewer at eye level to his form-finding. Since the object occupies a large part of the exhibition space, it pushes the visitor to the edge or takes it to its center. The movement around the sculpture reveals another ambivalent quality: it is three-dimensional volume and yet has graphic character, since the grid-like surface – like effects of Op Art – repeatedly results in new superpositions, diamond structures and interdependencies that irritate the eye.

But how can the title Paisaje Ausentado be reconciled with this contradictory finding? The concept of landscape is not so much a geographical concept as a philosophical one, which aims at the subjective perception of an aesthetic whole. Landscapes are therefore not only found in nature, but can be present everywhere, even indoors. Above all, however, landscape arises in the viewer himself and is the product of his subjectivity and the power of association. It sometimes requires only the smallest triggers, such as a smell or sound, to recall what has been seen and experienced. Thus, Salineros drives a multi-layered game, which ironically confuses our systems of order, but at the same time evokes images within us and, according to Stefanie Hessler, refers with the concept of absence to something that was once or has not been.