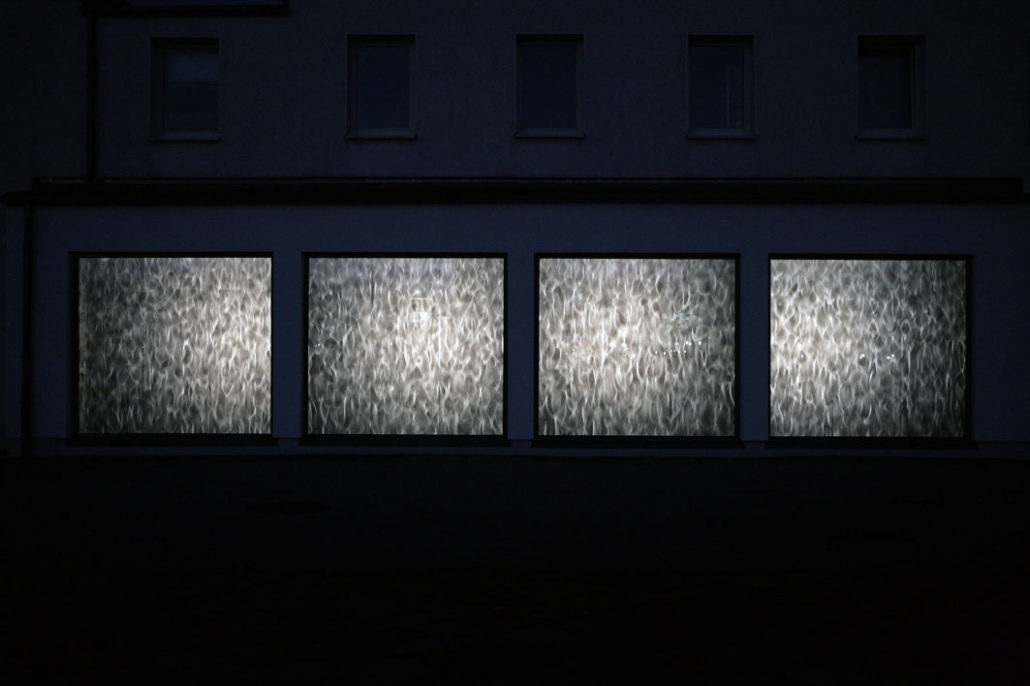 Yevgenia Safronova’s installation Lichterfluss (River of Lights) is a mere apparition, a mental image, to use Schopenhauer’s term. After all, anything that can be perceived so directly by the senses, and with such great suggestive power, necessarily remains in the realm of the unreal. Similarly, cinema, for all its realism, is only an illusion – a mediated reality that likewise depends on the fulfillment of certain conditions for its existence (technical conditions such as film projector, for example). But perfect technology, here as there, serves only to make itself invisible and forgotten; it allows us to disregard the limits of two-dimensionality.

A moving image in cinema is always an image of the past: a sequence of movements unalterably preserved. Safronova’s images move as well. Yet the latter’s movement is not something recorded and conserved, but real movement in real time, happening precisely in the here and now.

The actual process is simple: Water flows over a glass pane. This pane is projected like a large slide, using a car headlight as its light source, onto a transparent film adhered to the gallery’s showcase windows. For all the tremendous technical effort involved, the mechanism is as straightforward as the projection itself: simple physics.

The projection’s formal constellations are controlled by changing the consistency of the water with the help of a rinsing agent, in such a way that it is not drops that run over the glass, but streams – a liquid film continuously tearing open or closing, a controlled coincidence. As such, the figurations and formations of the water flowing on the pane cannot be predetermined. Similar to Jackson Pollock’s «drippings» over a horizontal canvas, the randomness of flow is a conscious part of the pictorial strategy. Pollock’s method contrasted with that of fellow American painter Morris Louis, who consciously controlled the flow of paint from top to bottom on a vertical canvas, while also taking moments of chance into account.

The water in Safronova’s work makes its own marks and own lines, as it were, without ever settling into a definitive picture. The viewer is confronted with a process simple enough to allow them to be absorbed by it, with sufficient complexity to keep it from being merely banal.

What we find is a collation of temporal immediacy and material mediation. The flow of water cannot be experienced as such. It isn’t the flow of movement we see here, only its immediately effective, equally moving image – touch the projection screens and you will not get wet. This quality creates an almost magical tension between direct and indirect, between reality and image. And it opens up further associations. The flow of water becomes a «river of light», but also a snowstorm, a sea of flames.

The space and its surrounding architecture slide into uncertainty. The room dissolves, is made the vanishing receptacle of a highly dramatic occurrence – one that by no means limits its effect to architectural boundaries, but spreads to the exterior as well. The projection surface becomes a membrane between inside and outside, between art and reality. Luminous and thus indicative of an interior, it nevertheless does not reveal it. Instead it flows to the exterior – to public space, beyond the limits of architecture.

Hence, this play of apparition and thingness, of surface and depth, of coincidence and determinacy is – apart from purely aesthetic play – also a symbol for the flow of life, for the cyclicality of nature and the human life cycle, but also a metaphor for endlessness and unrepeatability.