I believe that art will never be changed,
insofar as our society does not become an art,
our art is not transformed into a society. 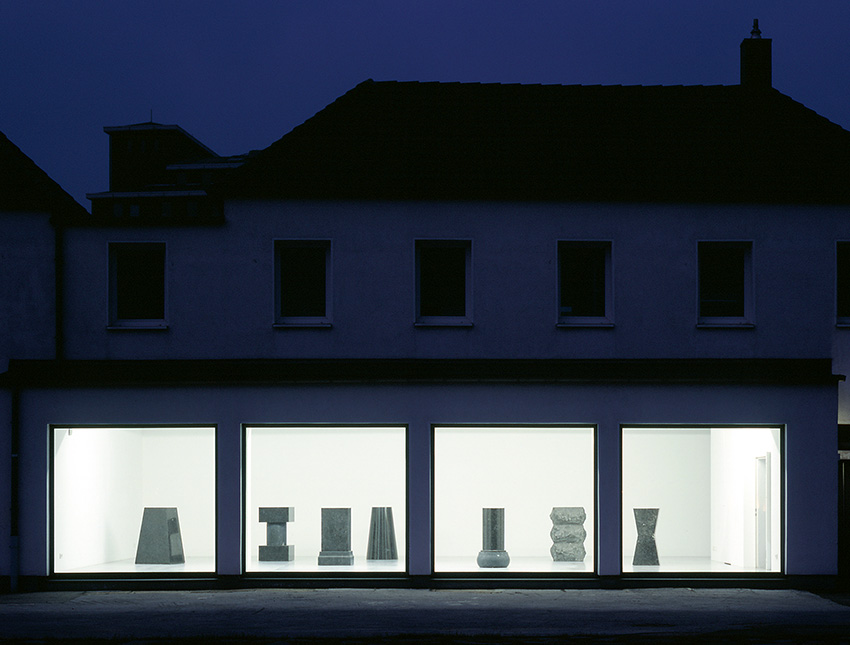 Yuji Takeoka – an artist born 1946 in Kyoto, Japan, who has been living in Germany and exhibiting internationally since 1973 – consistently explores those same questions. In doing so, he always relies on the visual experience of the viewer, on the senses-based experience of his art as a necessary, absolutely indispensable precondition for its understanding. He insists on this despite an obvious conceptual component to his output, a factor that generally downplays the importance of senses-based experience.

The bicultural Takeoka reconciles the conceptual with the sensual, as it were. For how else but with inquisitiveness should one encounter works that have the formal look of «media» (more precisely, like pedestals used to bolster a sculpture to an evident presence), but which, in a consistency only typical of «artworks», are all fashioned from the same Belgian granite material? Each has a finely-worked surface, the same height and thus somewhat isocephalic dimensions (105 centimeters), and each – given to their volumes – unambiguously asserts an independent presence in the space.

Takeoka calls his seven sculptures Seven Blue Stone Pedestals. Inevitably, one thinks of the Seven Wonders of the World and the seven candleholders on a menorah; invariably one thinks of meaning, in other words: what is happening, what is affected, what changes? They stand there, in a space that is first and foremost a showcase window. Only they demand to be looked at. And yet as soon as one does so, the space, for example, also becomes part of what you see. The not-thereness of what is de facto presented on the pedestals becomes an also-seeing of both what is there and also that which is materially no-longer-there – space,surrounding space around, space in between – and also that which is still there, in the surroundings, the environment, … the world.

The floor becomes the de facto pedestal of the pedestals-as-sculptures; beyond that, everything else becomes the thing presented. It follows from this that that which is materially there no longer takes center stage in terms of what is meant to be perceived. We also see everything else that is both abundantly obvious and yet rarely the object of attention – all other things that hardly ever come into consciousness as something to be perceived.

On the one hand, Takeoka’s Seven Pedestals themselves appear as autonomous sculptures. This is how the eyes take in forms, which is to say volumes, bodies, shapes, and architectural structures…. Consequently, they appear as concrete or minimalist works. Yet at the same time their respective Being (and this primarily because they are presented as a seven-part group) is always below the horizon of their recognizability as a pedestal – something that triggers a looking for and seeing of what else might be there besides them, which is to say the presented objects.

With a view to the history of twentieth-century art, one could argue that these works oscillate between objects and «things» (as we know them as ready -mades or from Pop Art), on the one hand, and concrete forms and volumes (with allusions to European Concrete Art and its American successor, Minimal Art) on the other. Postmodernists might see an aspect of irony. But Takeoka’s sculptures refuse to be interpreted as ironic. They are too authentic, too sensitive, too clear, too serious, too present in what they are. What they strive for instead is a visual presence that is at once unique to them and also an influence on their environment.

In this way, Takeoka’s sculptures also present their own, unique form as an intrinsic value – irrespective of their superficial resemblance to pedestals – even if they can never ridthemselves of it entirely. Therein lies the secret of Tak works, albeit an extroverted one: They look for the aesthetically (perceptibly) effective in the usually aesthetically overlooked. It just so happens that when pedestals become sculptures, the entire periphery comes into view. Pedestals as sculptures change the way we see what is there, because we look for what is missing. And most importantly: pedestals-as-sculptures present the world itself.