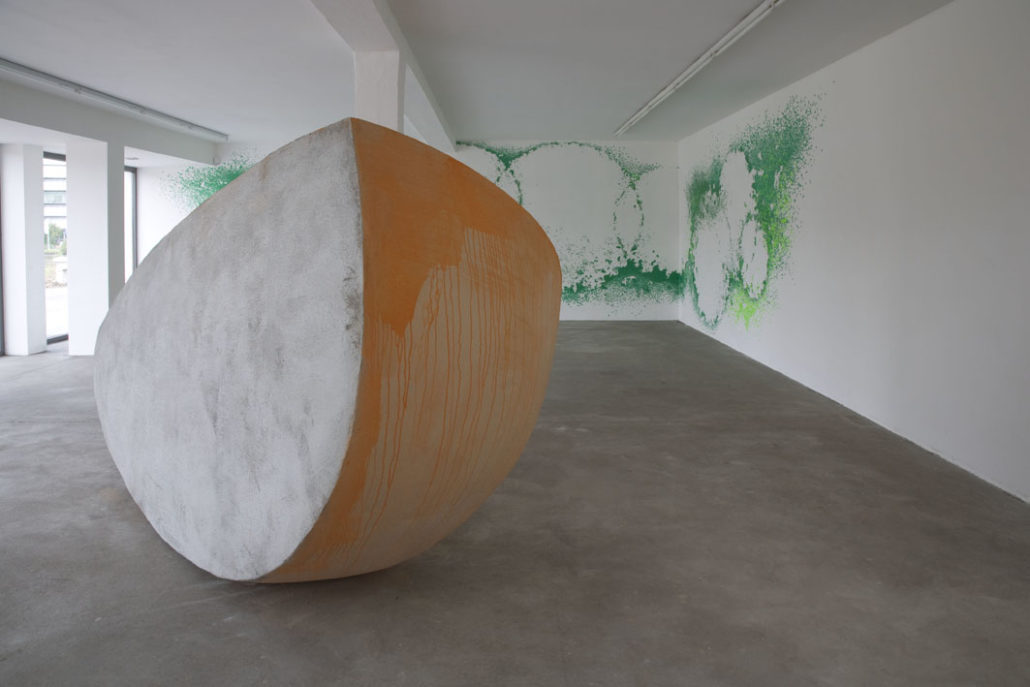 Even from a distance, passers-by feel themselves drawn to the strangely amorphous form in front of the Foundation DKM gallery in Duisburg’s Inner Harbor: a kind of oversized fruit with an orange-brown peel. Particularly striking is the coloring of that «peel»: the tinted plaster glows optimistically in the fresh orange of a playground jungle gym; on a second look, that glow seems melancholically faded, an earth-colored umber of rusting metal. Its form evokes similarly contradictory ideas. Despite appearing strangely familiar and close to everyday life on the one hand (evoking, for example, spontaneous associations with an oversized piece of fruit lying on its back), it also presents strangely and abstractly as a theoretically-developed complex, reminiscent not by chance of freestyle concrete sculptures (a type still seen in front of public buildings in Germany, for example). While it certainly piques a desire to touch it, climb on it or rock it back and forth, that instinct is suppressed by the usual impulse to keep a certain distance from artwork. This first «thing» is answered by its counterpart behind the glass windows in the exhibition space, a space that recalls a showroom from the outside. Both sculptures correspond to one other as formal counterparts, in effect forming a unity. Both show something like the grayish sides of a fruit slice, facing one other. Reading them representationally, one might ask: Has a knife somehow cut this monumental fruit plant, tuber, lump of dough, marzipan roll, loaf of bread, piece of meat, sausage tip, possibly beef tongue into two different sections, the larger one outside, the smaller one inside? The suggestion of thingness is so strong that the visitor almost wonders which invisible hand placed the smaller section in the gallery space.

Gereon Krebber has thus realized a two-part sculpture, one whose ambivalence both reacts to and elaborates contrary sculptural possibilities. On the one hand, it unfolds as a sculptural occurrence in the tradition of concrete, constructive sculpture: developed out of itself, following its own principles of order, autonomous, significant, and sufficient unto itself. And yet the pair of sculptures have neither concretion nor meditation in mind. What seems to fascinate Krebber is their true function: playful appeal. It becomes clear that that the volume and surface of these objects are not a choice stemming from any particular material or spatial reference; their unique, almost emotional impact owes to their extreme thing-like quality — arriving at something approaching a Claes Oldenburg figuration. Slurp, the exhibition title, certainly hints at a relaxed relationship to the comic generation’s legacy, particularly its approach the iconic and emotional qualities of Pop Art. Onomatopoeic and associative, Slurp (as in the noisy slurping sound) conjures a scene from the world of illustrated picture books and immediately eludes linguistic appropriation. Yet the two divided «slices» derive their charm not from Oldenburg’s practice of transforming banal everyday objects into ironic monuments to consumer society, but rather from their light-hearted play with the power of our imagination. Krebber is however a great-grandson of both dominant American artistic movements of the 1960s: Pop Art and its counterpart Minimal Art, the former understood as a delayed affirmation of consumption and everyday life, the latter as a reaction to loss of the concrete as a result of mass media.

Something similar can be said of the green pattern on the wall, a cluster of circles dense in some places and scattered in others. The pattern has the look of afterimages, yet a viewer upon approaching also becomes aware of countless green and (almost invisible) white paper dots — each individually glued by hand to the wall. The circles, intertwined like a kind of mist, replicate and magnify the hundreds of thousands of microbe-like, elementary shapes. Despite the diffuse structure, it gives the wall a slightly sign-like appearance, making it seem almost readable. Both the sculpture and the wall pattern are suspended in the tension between succinct visual and ephemeral thingness. Still, as soon as the lured passer-by notices them — freed, if only for a moment, of the belief that forms come only from rational planning and artistic calculation — their emotion and spontaneity are rewarded.