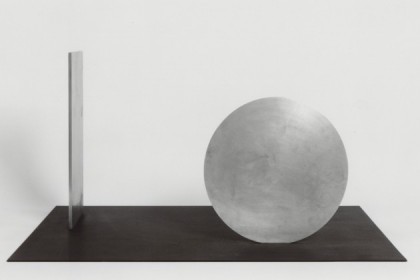 “It is not the body, but space that has become the object of sculptural work.” This statement by Dieter Honisch, the former director of Berlin’s Nationalgalerie, aptly sums up what is unique about Ernst Hermanns and his sculptural oeuvre. The artist, who was born in Münster in 1914 and died in Bad Aibling in 2000, occupies a unique place in art history – an assessment to which all connoisseurs, from Gottfried Boehm to Rolf Wedewer to Armin Zweite, can agree. Nonetheless, Hermanns’s work has yet to gain the wide appreciation it deserves. Much of this has to do with the material his sculptures employ, which is to say space. It is a substance that rarely manifests itself at first glance; only in the willingness to take pause and concentrate does it become visible.

December 2014 marks what would have been Hermanns’s 100th birthday. Museum DKM in Duisburg celebrated the occasion with a large, yet concentrated exhibition devoted to the artist.

Some 40 percent of the work is in the museum’s own holdings. Museum DKM, with its Asian, Egyptian, and modern art collection, constitutes a center for art forms that have one thing in common: All require a contemplative approach. The silence of these works becomes a void to be filled with the viewer’s own spiritual and intellectual movement.

Hermanns lived in Münster until 1967, then in Munich. He was a professor at the University of Fine Arts Münster from 1976 to 1980. Solo exhibitions of his work include those at Museum Schloss Morsbroich in Leverkusen (1974, 1989, 2000), at Lenbachhaus in Munich (1983), at the Landesmuseum in Münster (1985, 1999) and Lehmbruck Museum in Duisburg (1999). Hermanns participated in Skulptur Projekte Münster in 1987 and received the prestigious Piepenbrock Prize for Sculpture in 1990.

Space, Statics and Movement – The Sculptor Ernst Hermanns traces the sculptor’s development from 1952 to 2000 through 62 examples of his work. The 1950s saw the surface of the artist’s sculptures became porous, a factor that brought open space into the volumes. From 1956 to 1959, Hermanns worked on organic-seeming structures defined by their movement and large drawings that manifested space in boundless linear flows, swirls, and hatchings. The early 1960s brought a decisive change to Hermanns’s work: The artist no longer depicted the moving currents of space directly, but created them through «multiform sculpture» instead. He described the process very clearly: “When several individual forms relate to one other, it creates a spatial tension from volume to volume. The space is included as a connecting part of the sculpture and takes on a new meaning.”

Hermanns always conceived the material element more simply in his multi part sculptures, where only the spatial constellations are important. While early works from 1960 to 1963 appear as deformed and obliquely placed cuboids – the space between them made dynamic with a sensed feeling of movement – Hermanns’s practice after 1964 produced only clear, geometric, easy-to-understand forms made of metal: round rods, square rods, circular and rectangular disks, spherical shapes. In doing so, he simultaneously created an independent parallel to American Minimalism.

The thing that is set in motion, that takes shape in correlations, juxtapositions, and rhythmic sequences, is the space of tension between forms. Hermanns himself spoke of a «synthesis of individual elements» that incorporate space and «transition from static arrangement to movement». Until his last, 85th year, Hermanns created very different spatial constellations, sometimes crowded-together, but often very broadly arranged. Only a long look reveals their charged sense of expression, the dynamic tension inherent to them. One senses what Hermanns noted of his sculptural work: “As a tremendously concentrated form, it has to have an aura.” While the opening-out into space is a dominant theme in modern sculpture, few artists imbued space with autonomous, sculptural substance the way Ernst Hermanns did. Curated by Prof. Dr. Erich Franz, the Museum DKM exhibition puts Hermanns’s work in dialogue with a number of comparable positons in international Modernism, including Alberto Giacometti, Hans Arp, Norbert Kricke, Günter Fruhtrunk, Donald Judd, Erich Reusch and Franz Erhard Walther. It is always a matter of dynamic processes that transcend the bounds of the material. Each sculptural constellation gives rise to other movements, which the viewer then completes. Common to all these works, however, is the power of free spiritual and perceptual movement in space.

Sponsored by the Rhineland Regional Association (LVR) and Kunststiftung NRW

The exhibition was accompanied by a catalogue featuring visual documentation and texts by Erich Franz, Rolf Wedewer, Armin Zweite, Gottfried Boehm and Raimund Stecker, among others.