The exhibition was accompanied by a booklet with a text by Dr. Heike Baare and photography by Werner J. Hannappel. 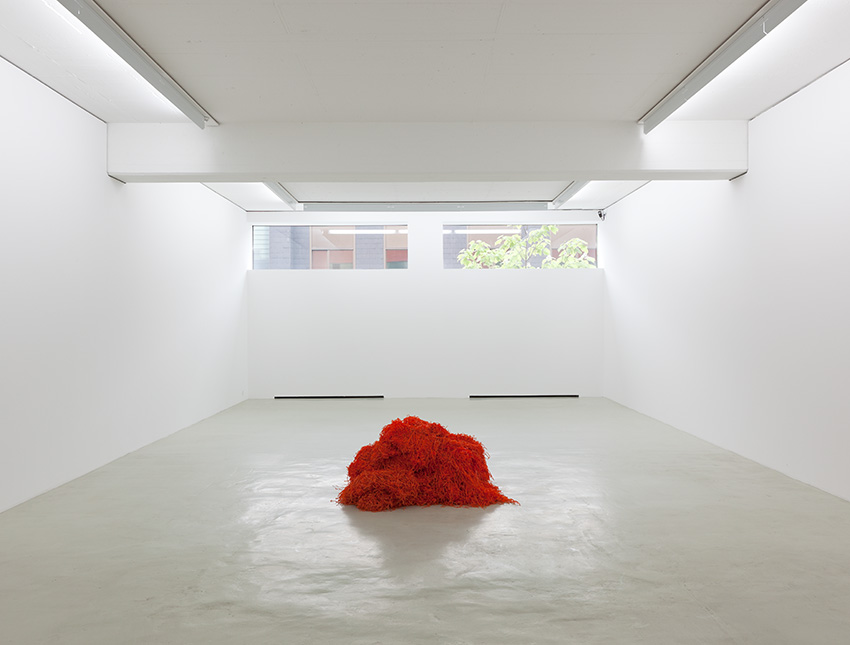 «Drawing can start like rain», Katharina Hinsberg writes in her lyrical texts, describing the artistic medium that has preoccupied her since her academy days.1 Titled spatien (space or space between), since the 1st of July 2011 she has been letting her reddish-orange lineaments patter from the ceiling of the exhibition space at the Museum DKM, allowing fine strips of tissue paper to collect on the floor and ascend again to the ceiling from luminous, cloudy clusters. The strips fall to the ground in irregular intervals and with variable density, forming curtains or open, vertical passages. The visitor, searching for a path through the threads of rain from the ceiling and the mountains of paper lying on the floor, sets the delicate web in motion and causes it to dance, a movement amplified, perhaps, by the visitor’s own breath, reinforcing the impression of flowing or natural growth. The viewer’s perception springs back and forth between the individual pieces of paper and the overall impression of the space, between detail and chaotic abundance. The softly undulating movement of the material and its gentle rustle recalls encounters with nature, lending itself to vegetative or nature-based associations. Intricate lineaments react to their environment with the sensitivity and vulnerability of neural networks, human sensors or detectors.2 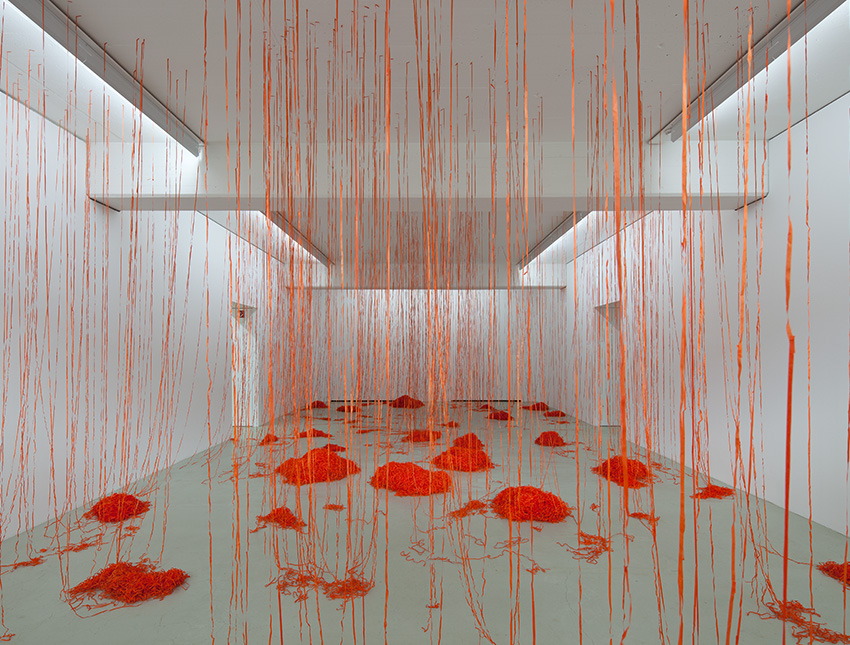 The tenuous and seemingly random web was created within the parameters of a systematic analytical approach: a machine is used to cut tissue paper into five millimeters thin strips, an even finer cut would be technically impossible. Each strip is 70 cm long. The total surface area of the paper – 103.73 m² – is equal to that of the floor in the exhibition space. Once accumulated, the artist leads the paper strips one by one to the ceiling, gluing them together at the ends. It is only during the working process that the artist decides exactly how she hangs the cut paper and when this procedure is complete. The subjective moment determines the end of a precisely defined concept’s execution. The installation’s conclusion might also be influenced by external circumstances such as the exhibition opening date, though here the crucial factor has less to do with a state of completion. Every phase of this procedure is equally important to the artist – starting with the moment she distributes the material in the space and begins her work – and each is a complete incomplete picture in itself. An objectively measurable end to the process could only be achieved once the material was processed in entirety, thus translating the entire surface area into space. The installation is consequently a processual and so it remains, as the changes made by the viewer or material fatigue are thoroughly accounted for and the environment is always in flux.

It is less the traditional function of drawing that Hinsberg is investigating than the line itself, the basic properties and possibilities of expression of which she reflects upon and frees from its limitations in a variety of ways. The materials and techniques she employs, however, are conceivably light and in themselves bear no evidence of the transformative quality of her artistic procedures. The artist draws, cuts, staples or glues paper, which is very often in the standard formats, while their colour palette is largely limited by gray and black of india ink and graphite or the various nuances of white in the paper or bright red or orange, another characteristic feature of the Museum DKM installation and one the artist is especially fond of, since it raises no nature associations whatsoever.

Works such as spatien anticipate artistic strategies that lead still mimetic, drawn lines to autarky, until they finally defy any definitional function and, under the artist’s direction, conquer the room. In her découpages (from the French découper or cut out), Hinsberg bypasses the drawn line with a scalpel, unhinges it from the paper and suspends it in front of the wall as a fragile structure fixed to the ceiling only with a pin. Wrested from the drawing surface with surgical precision, the degree to which these notations have their origins in impressions of nature – their details captured in front of the subject or from memory alone – is evidenced in her writings, which speak of leaves, fruits or poppy, or of «elder beads with their tiny eyes mirroring the fall heavens».3 The gaze is oriented not toward the totality of the landscape; it is the singularity and beauty of the forms, the contours of each individual structure that captures the artist’s attention.4 The detail discovered is further pursued as a formal idea, becomes independent and leads to new forms and drawings.

After the drawing and cutting comes the distribution and spreading of the material across the area; if Hinsberg strings hundreds of découpages together, then the process continues until an even structure of fine, insect-like characters covers the surface of the wall. Here, too, the work finds completion in its dependence on the concrete space in which the work is installed, and it is only in this interaction that the line becomes a sculptural form.

Like the découpages, the cutting and hanging of the spatien installation reflects the basic principle. They are the preconditions of the free line in space. But while the former can still be attributed to the afterimage of a real impression, the drafting and reproductive line no longer holds any relevance for the latter. The line itself has become material, freed from all the functions dictated by traditional standards – be it mapping the contours of a real object, lending expression to a spontaneous idea in a sketch or drawing a picture to convey semantic meaning.5 It’s mechanical cutting removes it from any artistic subjectivity. Objective conditions such as the floor area and height of a space are used to determine the length and quantity of the «line material». Interest is directed to the «transformation of an area into a spatial structure through cutting».6 It is in the moment of installation, however, that intuition and the basic concept begin to interfere with each other. It is only on site that the artist decides how the lines will be «pulled» into the room and when the work is complete. It is in its hanging and distribution in space that line once again approaches drawing, as it recovers an authorial quality.7

In the end, the objective and factual methods underlying the installation fade completely into the background in the viewer’s perception. Given over to the forces of gravity, the fragile lines fall to the floor. They begin to move, take on a life of their own and trigger a wide variety of associations in their delicate transience. Though the working process is based on a concept of predetermined, objective parameters and the line is treated as autarkic pictorial material, the completed installation spurs a number of ideas with regard to natural analogues, and it’s gentle, dance-like movements appeal to the viewer’s subjectivity.

Katharina Hinsberg‘s artistic strategies are generally beholden to a rigorous regularity; her work processes are marked by repetition and monotony: “My drawing follows less the impulse toward statement and expression than that of regularity and pensum.”8 Her procedure demands discipline and precision – and most of all time. Yet the result is less a finished work in the traditional sense than a self-contained unit that endures a number of different contexts. Hinsberg’s installations are transitory, and they are systematically related to site by the fact that an underlying, fundamental concept can indeed be applied several times, though each time it can react differently to the concrete conditions of the space.

For the installation X x A4 in the Hamburger Kunsthalle (2010) – previously realized in the Kunstverein Wilhelmshöhe Ettlingen – the artist sliced reddish-orange A4-format paper into contiguous strips and attached it evenly to the ceiling of the exhibition space, creating a second, circumventable colour space. The floor area corresponds directly to the surface area of the paper. As with spatien, the lines descending from the ceiling develop into a kind of coloured hatching that extends into the room.9 Here the artist also succeeds in opening the technique of drawing to the third dimension. The line becomes, paradoxically enough, a sculptural material, becoming translucent bodies of colour by way of extension and repetition as per the «all over» principle.

The installation’s title spatien (from the Latin spatium), with its various implications, highlights Katharina Hinsberg’s intentions in commingling the drawing medium with painting and sculpture. It names the installation’s extension into space as well as the intervals that develop between the falling lineation; at the same time, the word’s framework of meaning also includes a period of time and with it, the very dimension that Katharina Hinsberg contrasts with the transience of the drawing stroke: “The cutting, as opposed to the fleetingness of the drawing, is tedious, both in terms of time and patience, [and requires] an almost surgical concentration.”10

Drawing and writing are closely related, and so it seems only logical that Katharina Hinsberg reflects on her own artistic work with accompanying texts, elucidating their rational-analytic approaches while expanding poetic images with language. Her handling of the medium of language is just as exacting as that of her visual art; in both, she shows an accuracy grounded in a poetic vocabulary and precise grammar. Drawing is in itself analysis – for it must translate space and volume by means of line and hatching – while at the same time it is also considered the most immediate reflection of the form-giving idea and artistic subjectivity. In her work, Katharina Hinsberg confidently moves between these two poles of the drawing medium, mediating between the exacting and the casual, ratio and intuition, concept, and ambiguity.