The Beauty of the Ancient World is ageless, timeless.

The exhibition is part of the permanent presentation of the Museum DKM. 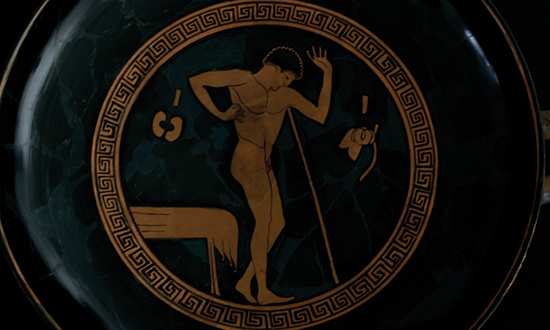 The Beauty of Antiquity is Ageless, Timeless

Together, the exhibits in this room—photographs, drawings, Greek bowls, and Roman statue fragments—pay homage to the sensual beauty of the (mostly male) body and antiquity. The ideal representation of the human figure, adjusted for individual deviations, was famously realized in the Doryphoros (Spear Bearer) by Polykleitos (around 440 BC) and also appears in Polykleitos’s «Canon», a set of aesthetic principles developed by the sculptor. Ancient representations of human proportions have had a profound impact on how artists view the human body ever since, a fact also evidenced in the twentieth-century photographs and drawings exhibited here. It is interesting to observe how photographers use light, perspective, and composition to depict the human body in a particular way, whether those subjects are living people or chiseled in marble. So long as homosexuality was prosecuted, i.e. well into the twentieth century, there was only one outlet for the homoerotic gaze, which is to say it was only permitted when directed at nude figures in a work by photographers Konrad Helbig or Herbert List, for example, or unclothed male subjects with a pose or props reminiscent of the Renaissance or antiquity, as in photographs by Wilhelm von Gloeden or Wilhelm Plüschow. Painters and sculptors such as Richard Scheibe were granted a certain leeway when it came to nude depictions. 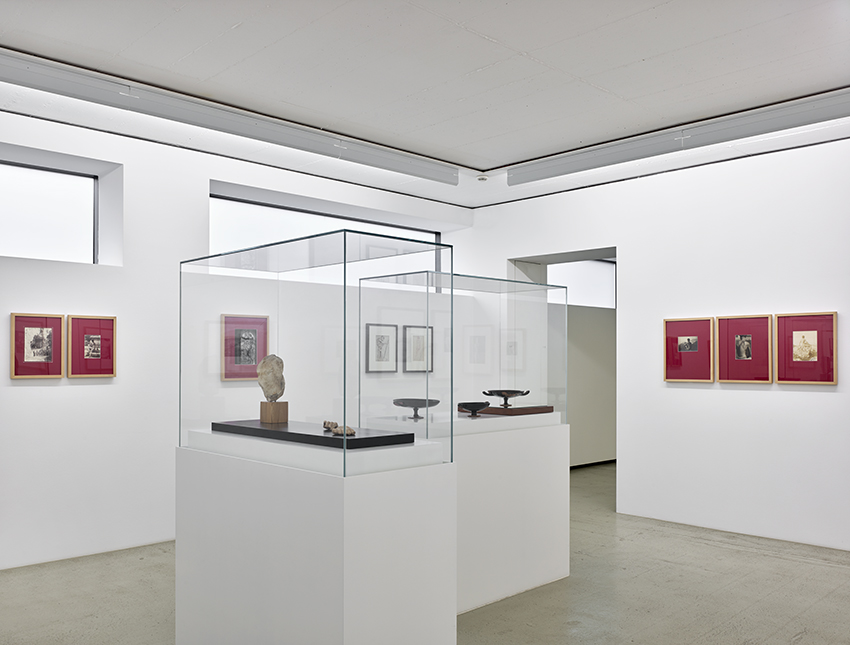 Proceeding with the works exhibited here, let’s start at the right end of the back wall and turn towards the left. First, a photograph by Klaus Kinold (b. 1939), taken in 1985, accentuates the head of a young woman, part of an antique statue (Glyptothek, Munich), by heavily lighting the background. In an undated photograph, Konrad Helbig (1917–1986) shows a bust of Antinous (Uffizi Gallery, Florence), a favorite of Roman emperor Hadrian; the bust is photographed directly from the front and crossed with shadows created by side lighting, giving it a heroic hardness. Another photograph by Herbert List (1903–1975) from 1939 shows the head of a youth together with two folded hands (National Museum, Athens). The hands hint at the dynamic motion of the arms common to the Hellenistic period, which also matches the realistic modeling of the face. The fragment’s unique movement is also emphasized by the arrangement of the head and hands in a diagonal from bottom left to top right. The next photograph is also by List, who photographed plaster casts in the destroyed Munich Academy in 1946. In the ruins we see the toppled-forward statues of two nude, muscular men and that of a boy sitting in a relaxed position with his face turned away, as though he were looking out at the doorway in the dark wall. Ralph Gibson (b. 1939) studied the body of a classic male statue in 1979 and Herbert List focused on the river god Kladeos from the northern corner of the eastern gable on the Temple of Zeus at Olympia. Though actually meant to be seen from the side, he photographs it from an extreme frontal view, i.e. from the head.

An undated photograph by Konrad Helbig shows a kouros dating from the mid-sixth century BC with heavy lighting from the side. For Pergamon I (1997), Daniel Kane (b. 1954) photographed the statue of a beautiful youth in a ponderated pose with a right supporting leg and unburdened left leg; he is also propping himself up on something with his left arm, causing his shoulder to be pushed upwards.

Lighting effects virtually transform the marble into «lesh and blood». The subsequent three photographs paint a picture of the «inner emigration» many experienced during the first half of the last century and beyond. Wilhelm von Gloeden’s (1856–1931) photograph from 1914 shows a naked young man on a rock, Sicilian mountain scenery behind him. Face turned away, his position in the image accentuates the central horizontal and vertical axis of the picture area. In 1935, an unknown photographer captured the back of a young man in swimming trunks. Though technically he is sitting in a side view, he has turned his upper torso so far that almost his entire back is visible, revealing musculature under his skin. Another unknown photographer took Solitaire (Solitary) in 1940. The image shows a nude, suntanned young man in a high alpine landscape, captured from the rear left. The solitude must have been bearable after all, since at least the photographer was there as well.

A 1927 drawing by Richard Scheibe (1879–1964), created with a wine-red colored pencil, shows a naked man from a near frontal perspective. He is turning his upper body to the side so that his right shoulder and upper arm are in the foreground. Forearm angled backwards, his left hand is indicated behind the torso. He turns his slightly tilted head forward, holding it counter to the movement of his upper body. The contrasting movements create tension in the figure. Scheibe rendered the naked warrior, visible from the knees up, in 1922 with medium brown watercolors. While the legs are aligned almost straight ahead, the torso is turned to the side so that his outstretched right arm is far in the foreground. In his hand he holds a spear, the end of which touches his left knee. His left arm swings toward the rear, bracing a shield. In the photograph Am Morgen (In the Morning, 1936), Herbert List captures the view in Athens from a darkened room through a round-arched doorway, out to a thick wall on a balcony with iron railings. In front of the door hangs a tulle curtain adorned with lush leaf ornaments and a medallion with two swans and water lilies; light from the background makes it appear black. Emerging from the curtain is the fragile form of a boy in his underwear, standing on the balcony. In Wilhelm Plüschow’s (1852–1930) photograph Jüngling auf den Stufen einer Treppe (Youth on the Steps of a Staircase) he appears dressed only in a cloth slung around his hips, sitting on the upper step of a staircase that leads to a platform or plaza with a richly-adorned fountain. The boy extends one leg over two steps and has the other drawn in. His lowered head is placed squarely in the image’s central vertical axis. He spreads both arms, so that his upper body is enveloped in a classic triangular composition. Wilhelm Plüschow was a cousin of Wilhelm von Gloedens, whose undated photograph Taormina, zwei Knaben und ein Mädchen (Taormina, Two Boys and a Girl) directs the gaze to a vertical rock wall broken by an enormous cave. The photographer has a girl in transparent dress, a naked little boy and a young man in fancy costume posing in front of it; the photo was taken from a distance, so that the figures—integrated into the area of ​​the cave—appear small in the image. In his photograph from around 1900, Wilhelm von Gloeden captures what remains of the «Ginnasio romano» in Syracuse, seen from a high point of not entirely preserved Theatron, the rows of seats, to the right of the orchestra half-oval, the proscenium, and the completely demolished skene. The viewer’s eye continues over the excavation site and becomes immersed in a partly overgrown, partly cultivated ridge of hills. Yet von Gloeden appears intrigued by the fact that the orchestra is under water. At the edge of the proscenium stands a man dressed in white with bare feet in shallow water, his image reflecting in its motionless surface.

In 1945, an unknown photographer took a photograph in Hitler’s destroyed «Berghof» in Berchtesgaden which featured a huge picture window overlooking Watzmann mountain. In front there are three steps leading from the left down into the space. In the empty window reveal we see an American GI in side view, his outstretched, right arm and hand gesturing towards the mountain. The pose is one that could very well be seen on an antique statue. Even the monumentality of the space is based on ideas borrowed from antiquity. This is also true of the next two photographs from the period, taken by Max Baur (1898–1988) in 1937: a view through the colonnade of the «Haus der Kunst» in Munich, built from 1934 to 1937 by Paul Ludwig Troost, 1937 by Paul Ludwig Troost, a view of a staircase in the Reich Chancellery in Berlin. Around 1960, Otto Steinert (1915–1978) photographed Auguste Rodin’s Eva at Museum Folkwang in Essen, in front of a large, three-part window with the horizontal slats of a sun visor. The female figure is visible from the side and appears in silhouette against the light—echoing the antique woman’s head on the next photograph, seen on the adjacent rear wall.

The first glass vitrine contains three red-figured drinking cups of Attic provenance from Greece, from the period between 510 and 440 BC. The shallow drinking cup, with two handles on a more or less high stem, is called a kylix. In the red-figure style, the vessel is painted black with the exception of figures and objects, which are left plain. The contours of detail drawings are inscribed black lines; figures and objects take on the red, terracotta color of the ceramic material after firing. The oldest cup shows the image of a young man running to the right and turning his head. In his right hand he holds a spear, his chlamys (garment) is thrown over his outstretched left arm. The broad, black ring around the medallion features four characters with the words: “The boy is beautiful.” The cup dates to about 510 BC. The second cup is attributed to Onesimos («the useful») of Athens and dates to 490 BC. The interior image with a palaestra scene shows a young man with a raised left and bent right arm rotated in the body axis. Behind him is a bench covered with fur. Hanging on the wall behind him are two jumping weights; in front of him stands a vessel with oil for the athlete and an oil scraper. Outside we see a docimasy, an aptitude test on horseback; a young man brings the horse while the opposite side shows it in front of a Doric column. The third kylix dates to around 450–440 BC. The interior image shows a young rider with flowing hair on a galloping horse. In his right hand he holds the reins, in his left the whip as he drives his horse with its fluttering mane. The front hooves extend into the meander frieze, which frames the medallion.

The second vitrine contains three small fragments from marble statues: four fingers of one hand and the toes of one foot from Magna Grecia, fourth century BC, and the badly damaged, corroded body of a male figure from the region around Naples from approximately 200 BC. All three fragments are beautiful, yet they also bear traces of violence and spur the viewer’s imagination; one wonders how the statue looked when it was whole.