Tomorrow is no new day 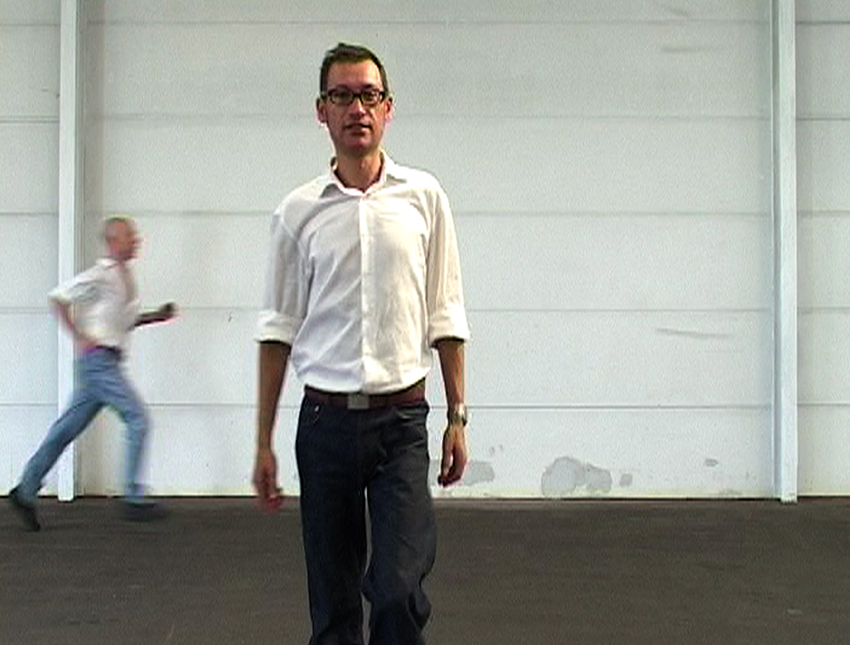 Xoán Anleo belongs to a young generation of artists that very consciously reflects on the status of their works as art. His practice includes work both with and between such diverse media as painting, sculpture, object art, installation, video, music, and performance. Anleo’s recent work Tomorrow is no new day, now on view at Foundation DKM, draws heavily on the disciplines of modern dance and performance. 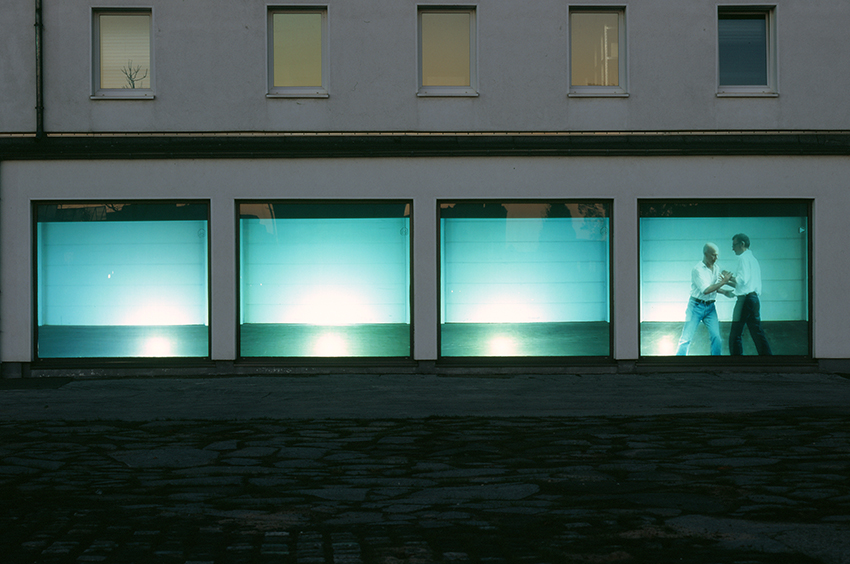 Many of the artist’s works are based on an initially seemingly arbitrary, everyday actions or gestures. This is as true of his video Tomorrow is no new day as it is of the two shirts he hung on dual wire hangers on the wall for Untitled (2002), or of the plastic toys that populate a white-painted pedestal in the installation Friccion (Friction, 2002). Yet for all the mundaneness of the objects Anleo employs, there is nothing mundane about them in the context of his overall oeuvre.

Looking closely at Anleo’s pieces, we notice that they refer to central paradigms of Modernism: to the status of the work of art, to the role of the subject, to different forms of narrative, and to experience as the central category of aesthetic reception. The art-historical premise for his work is the dissolution of the boundary between the art world and the everyday as conceived by Duchamp and subsequently perfected by Warhol. And yet in his use of commonplace objects and actions, Anleo is less concerned with questioning the boundaries between two separate realms than he is with probing the strategies of Modernism for their present-day relevance. In doing so, he arrives at surprising insights and new artistic strategies. Anleo does not incite a clash between his mundane-world objects and the world of art; it is rather that he uses the formal language of everyday culture to produce highly aesthetic objects. Although these objects still refer to their original function, their artificiality also highlights the fact that they are removed from that initial function. Like signs, they operate on a meta-level that allows them to refer to something signified.

Anleo, like other artists of his generation, considers a critical appraisal of Modernism a prerequisite for creating politically- and aesthetically-relevant art. This also comes across in his work Tomorrow is no new day.

Projected onto four panes of glass reaching down to the ground is an image of two men running incessantly from left to right and right to left across the entire length of the installation. They collide at times, bounce off one another, continue on their way alone, only to lurch toward one another again in the next moment, pursue one another, and separate once more. A constant interplay between closeness and distance, dependence and independence, friendship and enmity, strength and helplessness begins and never ends. Both men are at the mercy of this process and at the same time continually keep it going. All four videos run in a loop and start again from the beginning after about twenty minutes, making it impossible to discern a start and a finish.

Straightforward shots of an apparently trivial activity gain psychological potency in the process of viewing and in their constant repetition, which makes it clear that this is not about the two men we see, but about human beings in general and their relationship to others. Anleo’s work shows the contradictory nature of human existence and its failure to form a self-contained identity. Relationships are created only to be dissolved or called into question at the same moment. Humans are sometimes strong, sometimes helpless. Their ties to others are vague and constantly in flux. Also under scrutiny is the autonomous subject, another paradigm of Modernism: Anleo shows that the dream of the autonomous individual is one of the unrealized utopias of the modern age. The concept of the subject upon which Anleo’s protagonists (who are precisely not characters) are based has something confusing, suspended, indeterminate, and undecided about it. The performers seem incapable of pursuing a plausible activity with a defined end.

One of the essential features of his subjects is their inner inconsistency and the almost obsessive need to adapt to ever-changing situations. These situations and human relationships do not evolve in a linear process, but revolve around themselves, as it were. The loop (a feature of more than just this work by Anleo) symbolizes this circular structure of events. Anleo’s protagonists are unable to move forward in the story. They know: Tomorrow is no new day.