During the rebuilding for the opening of the Garden of Memories. 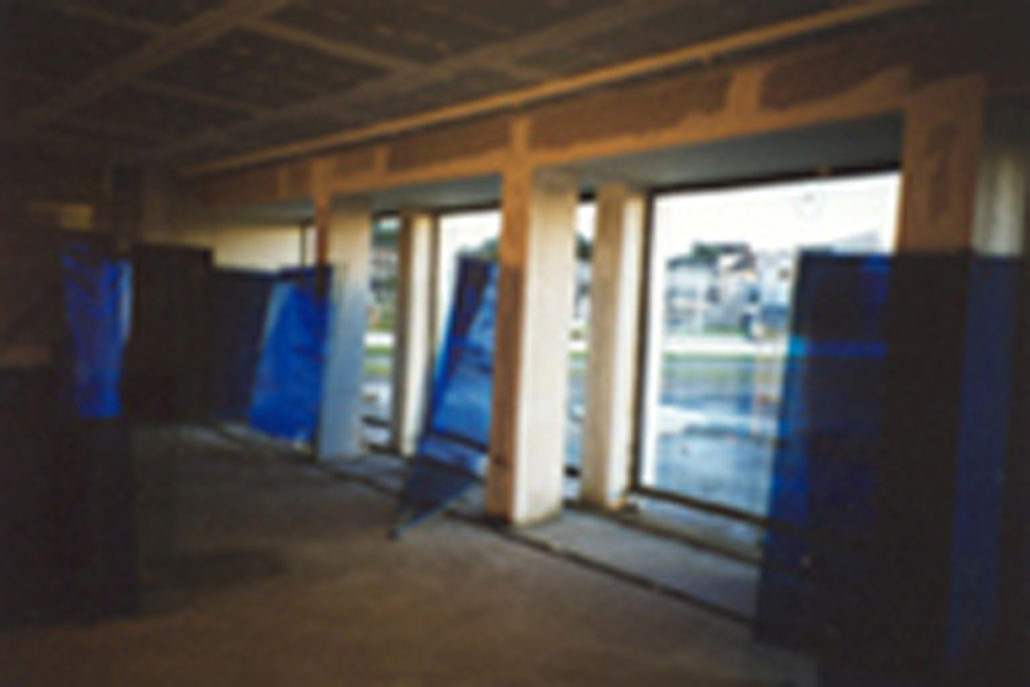 Nikolaus Koliusis (b. 1953 in Salzburg, lives in Stuttgart) works with the elements of transparency and reflection, which is to say with light. His means are surprisingly simple and succinct: mirrors or glass surfaces and blue filter foil, like the kind used to color light in the film industry.

The space is elongated and divided by a central row of columns; this is matched by a second row close to the large storefront windows, which allow a view out into the urban space or into the exhibition room. Analogous further columns are situated between the windows, where they serve as segments of the wall. The entrance leads to a short corridor on one of the narrow sides of the room. These «pictures» are positioned in various ways. In some instances they stand, seemingly precariously, at the corner of a room, leaning by themselves against a pillar, or in pairs on two sides of a support; at other times they overlap, having been placed closely together against a wall. The general shape of the transparencies varies as well: while in some cases they correspond to the contours of the glass panes, in others they skew at an angle, appear crumpled or folded.

A quick glance into the space can give the impression that the large «pictures» have been placed here without any particular intention and only provisionally. This impression is deliberate; in fact, Koliusis has employed that installation strategy before. For his work at Landesbank Baden Württemberg, a financial institution in Stuttgart, he left it to movers to decide how they wanted to place the large frames with transparencies at a particular spot in the bank. In that context, the sense of randomness dovetails into an assumption that Koliusis has consciously inserted an element of anarchy at this location – an element that, for all its chromatic beauty, formal unobtrusiveness, and technical flair, clearly disrupts the smooth functioning of the bank as a money machine.1

Such an interpretation would not do for the installation at Foundation DKM. The focus here is on the richness of the impressions, views, glimpses, reflections, superimpositions, condensations. After all the glass panes are not only transparent, they also act as reflectors. repeatedly-reflected, multiple present, whereby the «pictures» reflect not only the surrounding space, but also other «pictures» and the reflections visible on them in turn, thus generating a complicated fabric of visual axes. Added to this are the transformations of the image through the various creased or smooth transparency foils, which are either folded or suspended flat on the glass. In this way the light tubes, which are attached to the ceiling as two lines, blur into aleatory drawings on the plane of the folded foils, but at the same time are visible as a straight reflection on the plane of the glass panes. Distortion coexists with a «true» reflection of the surroundings as well as the simply tinted, but otherwise unobstructed view through the glass and foil, which shows the space behind the «picture» as well. As is so often the case with Nikolaus Koliusis, simplicity coupled with a laconic use of means produces a highly complex result; the viewer ought to be willing to appreciate it, to engage with her own perception as the thing to be perceived. Using standardized material that by no means denies its origins in the industrial field, Koliusis avoids creating an «aura» in favor of a perceptual field that is at once matter-of-fact and visually rich. But this is not about turning the artistic means on themselves, nor is it a recourse to the conditions and means of artistic production; rather, Koliusis understands his work as thoroughly embedded in the time in which he lives and to which he reacts. Thus, by emphasizing the temporary, under construction also indirectly reflects the economic and urban upheavals affecting the former coal and steel mining region and Duisburg’s Inner Harbor in particular, where the exhibition space is located – in an echo of other context-informed works such as the one for the Landesbank in Stuttgart and his installation at Museum Pfalzgalerie in Kaiserslautern.

In this sense, Koliusis is far removed from the hermeticism and encapsulated reference – lessness of Concrete Art, an association that might at first seem obvious. After all, if this truly is the Information Age, then the topic of perception and what we do with it remains as fraught as ever: “What am I seeing? An image? A space? Is this inside, or is it outside? Am I behind this or in front of it? What am I looking at, and what does it mean? How do I decide how to feel about what I see?

Koliusis pays close attention to the way we perceive and the approach we take to the visible, be it real or artificial. In this respect, many of his works and also his installation for Foundation DKM are occasions for reflection, and this in a two-fold sense. They call for pausing, slowing down, demand a willingness to constantly change «focal lengths», a flexibility of the eye and of the intellect.

Or as the artist himself put it: “If creating a sharp image is no problem nowadays, then it’s time to embrace the blur.”