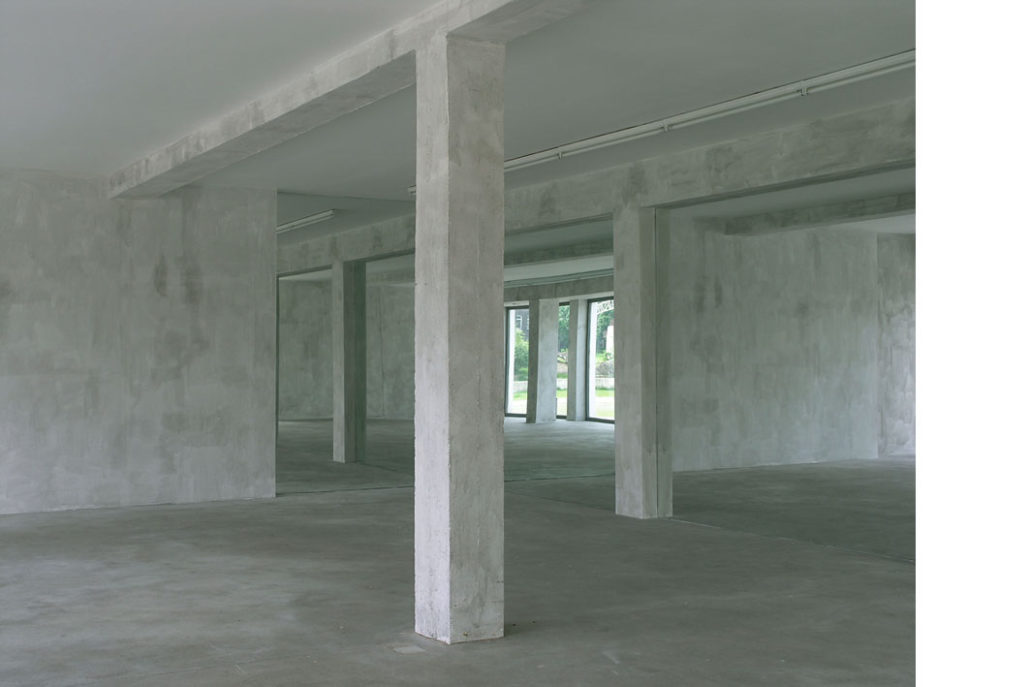 Ulrich Erben ventures far from the artistic realm where one would expect him to be. The artist is best known for color-field panel paintings featuring broad swathes of various hues, from his «white pictures» to powerfully-hued compositions.

Here we encounter a piece that seems to break with the rest of his oeuvre: looking in from the outside of the building, our gaze alights on a shockingly empty, open interior, moves across it and through to the outdoor space beyond, all without finding a single object that we might attribute to the artist’s work. Unclean walls and pillars—everything seems provisional, as if the expected exhibition of paintings had yet to be installed, or the visitor had come too early or too late—until the initial bewilderment proves intentional. The visitor comes to realize that the artist has created not paintings, but a space.

A closer look reveals that, for all its differences, this work does not constitute a break with earlier work. On the contrary, it is rather a concise culmination of existing developments. 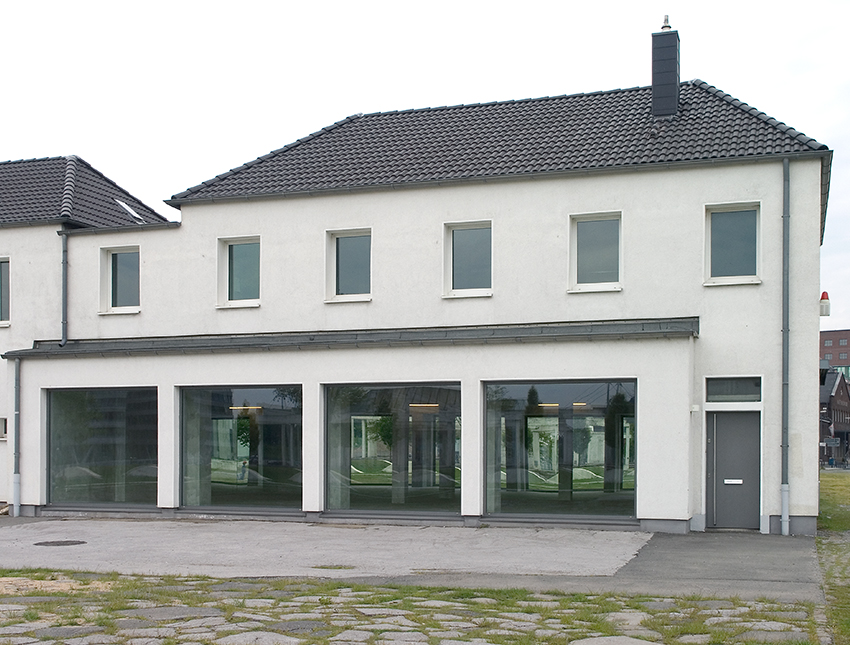 Two previous works by the artist offer insight in this regard, standing in retrospect as specific precursors to Der stille Raum (The Quiet Room). Erben’s Raum ohne Fenster ohne Tür (Room without Window without Door) at Studio A in Otterndorf 1999/2000 found the artist covering the walls of the space with large sheets of seamlessly-hung pieces of paper, with each individual sheet painted a single color. Though the monochrome color blocks do evoke the artist’s well-known paintings, the sheets were not isolated, individual artworks in this case; instead they operated as mosaic-like parts of an overall work that also includes the four walls—a scenario that points to the significance of the spatial setting.

Another millennial work encompassed the exhibition space at Westfälischer Kunstverein in Münster. Der andere Raum (The Other Room) featured not a single painting; instead, the walls themselves were painted in a way that translated the architectural arrangement into chromatic rhythms. A strictly geometric, serial pattern of white and black-blue areas was arranged in such a way that wall sections opposite one other displayed identical patterns, as if mutually mirroring one another.

Finally, a look at The Quiet Room: The viewer experiences it from the outside; there is no public access. The building’s entrance turns out to be locked, like the false door in an Egyptian tomb. A glimpse through the glass door is fruitless, offering only a very limited look at the space in question; viewers encounter a silent challenge to look at the building from another side of the building.

The façade flanking the actual space is dominated by four large windows. A glance through these not only leaves the visitor on the outside looking in; it also doubles them, as they soon discover.

A search for pictures bearing the familiar hallmark of Ulrich Erben’s painting is thwarted. Instead one finds columns separating the windows from one another; behind them a second row of pillars and far in the back another double row. The eye travels between them and into the open air of the harbor landscape.

Flooring in the airy, strangely large hall is bare screed; pillars and the few free wall surfaces are roughly mottled, evoking the rough look of an unfinished, newly-built structure.

Far away on the opposite side, beyond the windows there, the viewer registers the presence of another visitor. Startled, they quickly realize that it is their own reflection in the mirror. Having initially been blocked from entering the space, the visitor now experiences themselves through their mirror image as the code that opens the entire spatial configuration: Erben has installed four enormous mirrors on the wall surfaces facing the four windows, along with another mirror installed at a right angle to them. The matching wall surfaces first created with painted sheets of paper in Raum ohne Fenster ohne Tür (Room without Window without Door) and then by painting the wall surfaces in Der andere Raum (The Other Room) appear in Der stille Raum (The Quiet Room) with no reference to painting at all.

The quietness referred to in the title is the silence of the seemingly absent painting. But just as silence does not mean complete soundlessness, so too are the means of painting subliminally present. After all, the coarse texture on walls and columns is applied in a calculated way. Ulrich Erben used diluted ink to «dirty» the surfaces (as one would have to call it) rather than paint them. In doing so, he creates the preconditions for rawness, a state of unfinished-ness on the part of the architectural framework. The mottled walls also stand in sharp contrast to the immaculate mirrored surfaces, which no one expects to see in a building shell.

The mirrors make the real space appear twice as large. Because of its inaccessibility, the real space also becomes a purely visual appearance, echoing qualities of the mirror image. The result is an intellectual game with levels of reality, a vivid thought process that oscillates between seeing, imagining, and knowing, with ambivalences that question the naïve notion of an unambiguous concept of reality.

Appearance and reality merge to form a third, nameless category.