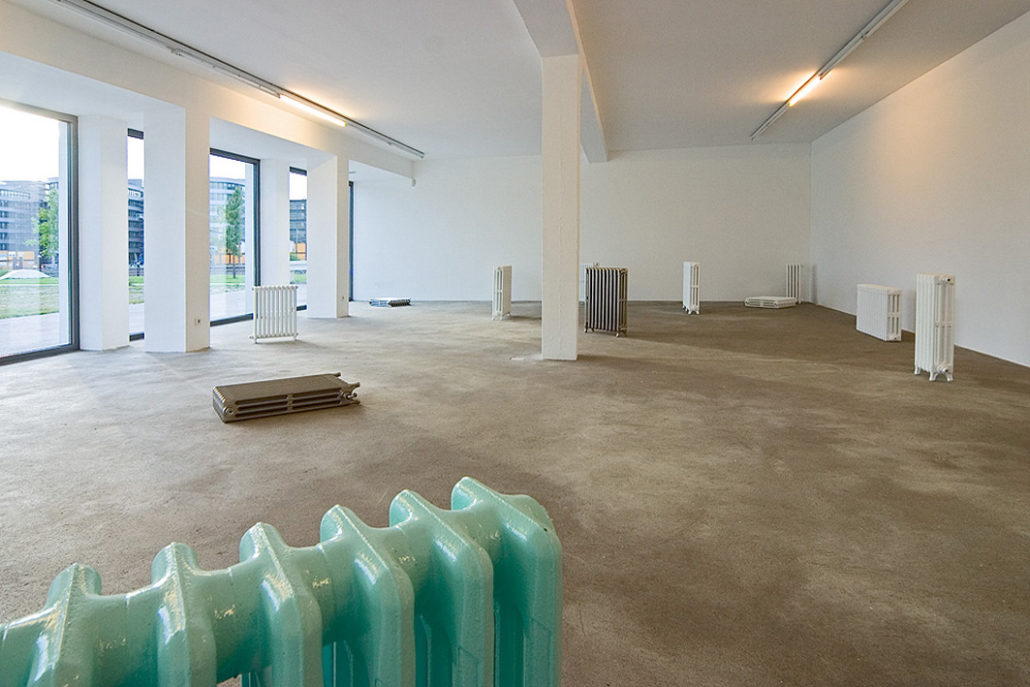 Catalina Gelcich’s recent visual work, titled Dead Line on Site, amounts to an objectual and architectural projection of the artist’s early training in the field of drawing and graphic design (and, to a lesser extent, painting). In view of this, one must concede that there is a linguistic choice when it comes to categorizing things in the traditional disciplines, one that contemporary art duly punishes. While the various disciplines and modes of visualization are transgressed at every turn—proof of the power of the Duchamp-inspired avant-garde—the fact that the work is carried out under the impression of said transgression does not necessarily mean a dwindling or loss of idiosyncrasy. The myth of «authenticity» (with all its Romantic overtones) holds little sway here, as for most of today’s art. But originality or idiosyncrasy is, in terms of the inner dynamics of art, a structurally poor category, a reactive one, dormant, so to speak; the same can be said of a certain kind of art based on the indulgent, pretentious notion of a hypothetical break with the past. Beyond offering mere novelty or an easy end to tradition, Gelcich’s aesthetic proposal derives its value and bearings in aspects of the way she views the installation genre; it is, in short, an authorial vision, one not so much shifted to the somewhat vague language of this last form of contemporary expression as it is reflected in it. It is rendered complete by an aesthetic reflectivity that the artist has pursued since she began her dialogue with the traditional processes of printmaking, drawing, and painting.

Dead Line on Site does not necessarily constitute a transgression in every respect. Bearing this in mind, we have to propose a different term for this declining post-avant-garde process. There is no transgression in contemporary art without re-establishing. Its approach can be as completely projective as it is retrospective (granted, architecture would provide the more appropriate model in that regard); it rejects the mere copying of what has been handed down, but also the patricidal mindset of determined avant-garde and that failure of memory that is as characteristic of fashion as the illusion of novelty. Away from this, and at a sufficient remove from the patricidal gestures in a certain part of the avant-garde, any aesthetic attempt, if pushed into dense terms that may be as formulaic as they are meaningful, is in a sense backward-looking, retrogressive, very much preoccupied with sources, patterns, and traditions. It underpins the logical processes as a kind of «retrieval of the past». In this case, the acknowledgement of origins takes place in advance of their overcoming. Certainly, there is no transgression without overcoming in contemporary art.

To reestablish and overcome, doesn’t that imply restoring art’s materia prima, its basic substance, in a more permanent way? At this point it is necessary to insist on this aspect: any replacement or surpassing in aesthetic matters presupposes an acknowledgment of the sources. (Roland Barthes already said it—wary as he was of any suggestion that he was now lapsing into a facile, childish kind of lecture: “We must find Fathers and Sons for the artist, so that he can acknowledge the latter and kill the former, uniting two beaux rôles: gratitude and independence. And this is what we call ‘going beyond’.”) This is the only way art can retain a certain strength; without it, its existence would evaporate in the networks of concatenation and interconnection, that is, in the market, entangled in the aesthetic appeals of informationism and show. Catalina Gelcich has captured this reality with formal means, but mainly with biographical ones. Her new works give a perceptible and sensual account of obsession through an aesthetics of memory, personal and domestic. A poetics or aesthetics of memory? What we find are certain features of obituary, linked skilfully to what is present in object art and installation (in their architectural manifestation).

Catalina Gelcich’s works on memory are an indicative exploration of origins: they explore the memory of the disciplines of painting and drawing (understood as design and concept), but fundamentally also memory in a biographical sense. What we encounter here is an aesthetic of the trace or trail. Her aesthetic work is to be understood as a demonstration of the artist’s biographical substance; her raw material—radiators, armchairs, chairs and other sumptuous objects—create a symbolic universe of domestic descent. To this end, and in contrast to the merely technical or interventional character of many contemporary installations, we can speak here of a strictly personal work in the original sense of the term. This intrusion of the artist’s «personality» must be linked to the tradition of resonances, both light and empirical, provoked by the treatment of objects and the calculation in their relationship to space.

Certain contemporary installations seem to be nothing more than mere arrangements of objects in space; they are Cartesian in their order, which is to say their order is based on little more than a text or concept designed prior to the tactile experience with space. They lack the noisiness inherent in the trace of the body; they lack the necessary insight into the relationship between objects and the space that serves as their support and abode. By contrast, Catalina Gelcich’s installations do not dispense with the capaciousness of a first look. But just as it is a concept of space conceived and formed on the basis of a series of walk-throughs, viewings, and checks, this first look has also been progressively displaced and deconstructed. It is this that apparently connects her work to the line opened by the Cézannic reconfiguration of space. Yet this going back to the analytical, to the dissolving line of modern art with all its language games and formal play, also runs counter to a certain nostalgic and melancholic mood that envelops her work. All melancholy has something baroque, out of proportion, about it at the moment of approaching objects or moving away from things. That is why this aesthetic is sufficient in an almost naked realism as well as in the spatial ambiguity of uncertain lines or in the evaporation of lights and shadows. There it is about an extreme closeness or an undeterminable distance. The melancholic sees no experience in between, except that of wonderment in view of the spatial. By this logic, Gelcich’s installations would not be spatial, but unfolded spatially; they would not be merely operative or intervention-like, but reconstructive, in the mnemonic sense of the word. Her work shows us that space is a subjective experience, a percept, a landscape… Here it is better to speak of a multiplicity of places than of «space».

In terms of how the trace aesthetic behaves relative to light, the current Dead Line on Site finds antecedents in two earlier works the artist exhibited in 2002: Frutos del Pais (Fruits of the Land; Santiago Museum of Contemporary Art, Santiago de Chile), and Sweet Suite (Centro Cultural Matucana 100, also in Santiago de Chile). These recently-presented works found Gelcich positioning a series of radiators and Victorian remnants on the floor (Sweet Suite) and on the walls (Frutos del Pais). The radiators served as basic modules—à la classical Minimalism—and were complemented by simulated shadows on the floor. The effect evoked the illuminative rhetoric of a certain painting and architecture of the Baroque. In this sense, the minimalist layout of the structuring exhibition space, in accordance with the overall design concept in the two installations, especially that of Matucana, was explicitly charged with the (pretended) contrast of light and shadow. Thus one could speak of a kind of baroque minimalism, one whose references evoke such dissimilar creators as Rembrandt, Caravaggio, Cézanne, Boltanski, Kounellis, and Matta Clark.

All baroque classicism oscillates between maximum silence and maximum noise. Heinrich Wölfflin’s despised categories of «open-» and «closed-» forms have ended only to assume an unsuspected relevance; at least so far as we can deduce from relatively current authors such as Calabrese and Sarduy. The limit of baroque expansion lies in its breathless search for a center; in the same way, although from another perspective, Kazimir Malevich’s non-objective silence is transformed into the kind of faint noise created by a utopian world without concepts and things. Much of modern art has moved between both shores: between the more tangible thingness and the disembodied independence of objects, between substance and idea, between concentration on form and expansion of content, contemporary art has thrived on a Baroque-type oscillation modified by brief aberrations and mannerist crises.

Dead Line on Site: Formally, this work departs from earlier works discussed above. The difference is that the emphasis, previously on light and shadow, has shifted to a modular arrangement determined by the array of radiators on the architectural support. In this process, symmetrical organization—so crucial to classical Minimalism—has been shifted relative to the volume of air determined by the supporting architecture, as a result of random arrangement. Concentration (in terms of means of expression) and expansion (in terms of content): the oscillation between these two spheres is what characterized the rhythm of modern art at the moment of a rather extreme period of development, namely the advent of the architecture-determined installation. Recently, the work of the latter, which is still in the process of maturing, has more resolutely begun its process of expansion: In the transition from the graphic to the object, from the object to painting, in all the sketches and many crossroads like superimposed drawing, Catalina Gelcich has finally encountered what would form the condition of possibility for all art from the ancients to the moderns: the architectural as matrix and support.