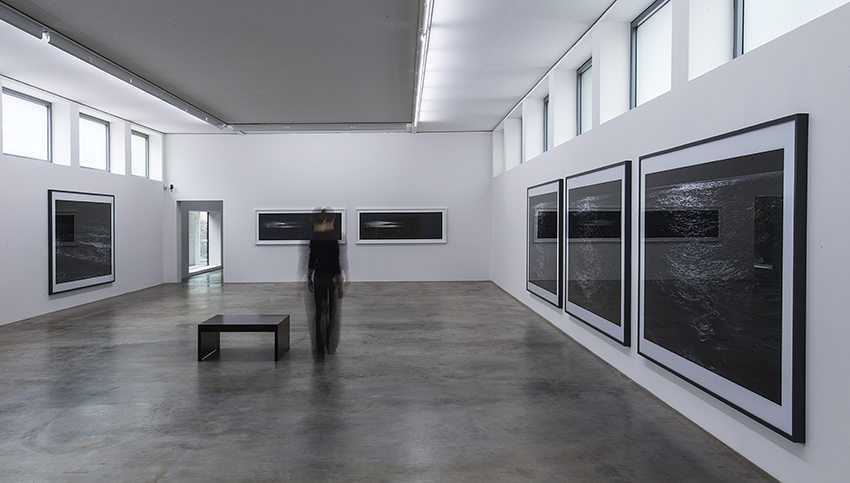 In the exhibition TiefenZeit, the Museum DKM presented a selection of the large-format photo series by Tom Fecht (*1952) on 300 m2 (four exhibition rooms). Examples from the series Eclipse, Electric Cinema, Incertitude and Gravitational Fields and thematically related still lifes and portrait studies were shown. Fecht has been involved in night photography since 2008, drawing on his creative potential from planetary and metereological natural phenomena, including eclipses, moon phases and special gravity effects in the Interplay of tides, often under extreme light and weather conditions. The inspiration and starting point of his art is at the same time his studio in the Finistére, on an unspoilt coastal strip of the French Atlantic coast.

His works reveal phenomena that appear invisible behind the surfaces of the sky and the sea and make them magical in an unrepeatable way. Minimal wave movements and flashes are visible in their inexhaustible patterns and fractal refractions. At the same time, they allow themselves to be emotionally grasped and overwhelmed by a barely comprehensible expanse.

He succeeds in recording natural events that are difficult for the human eye to grasp through sophisticated techniques, processes developed over years of. As a result, Fecht’s works not only transcend the aesthetic and technical boundaries of landscape photography, but also lead to the magical charge of nature in the depths of time.

Tom Fecht studied cybernetics, art history and computer science in Germany and the USA. Parallel to his studies, he founded the Elefanten Press Gallery in Berlin in the mid-1970s, followed by the publishing house of the same name. His own artistic debut began with the participation in Jan Hoet’s Documenta IX in 1992, for which he initiated the project Mémoire nomade – Names and Stones in Memory of the Victims of AIDS in cooperation with the German AIDS Foundation, which runs until the year 2000. Against the background of his previous engineering career, Fecht turned to photography in the late 1990s. In his works, empathy, poetry and an unbroken interest in physical phenomena meet in exploring the technical boundaries of analogue, digital and scientific photography. Works by the artist are in the collection of the new NationalGallery Berlin and the MUCEM (Museum of The Civilizations of Europe and the Mediterranean) in Marseille; all photographic works of the artist since 2012 are unique.

The exhibition was accompanied by a catalogue with texts in English and German by Petra Kayser and Isobel Crombie as well as images by Claudia Terstappen, Greg Wallis, Andreas Fechner and Christian Voigt.