The exhibition was accompanied by a booklet with a text by Raimund Stecker and Photography by Nikolaus Koliusis himself. 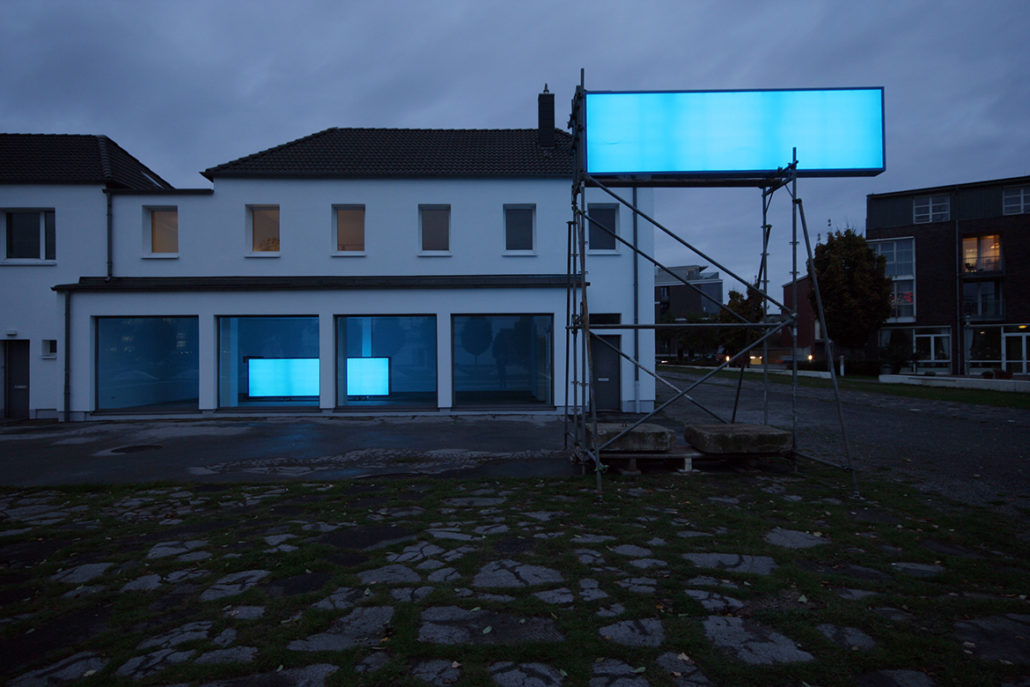 Do Come in
Highly visible! But what is visible?

An over-life sized rectangle positioned in a highly visible fashion behind or respectively in front of the window gallery of the Foundation DKM in the inner harbour at Duisburg radiates a blue light at night and simply appears blue during the day. It concerns in fact a light box radiating off to both sides, the front and back of which are deliberately in a monochromatic blue (and while the inner illuminants hardly structure anything, the work’s respective blue isochromaticism and monochromaticism are nevertheless perceived cloudily). 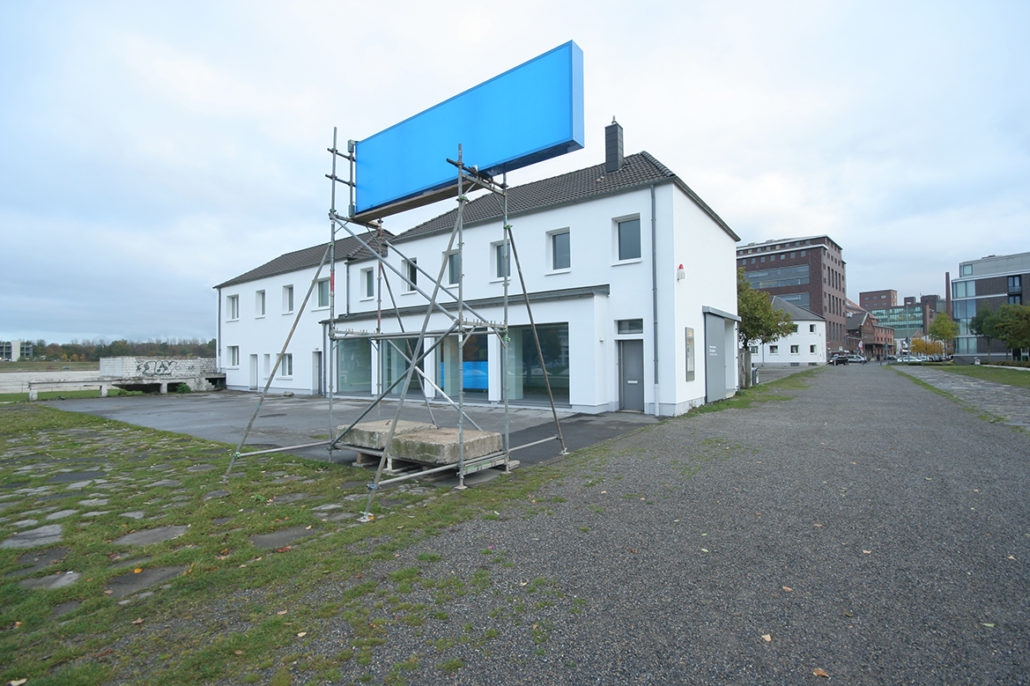 Shining in the dark, the blue calls out, demands as it were, in a highly visible manner, wanting to be paid attention to from the front as well as the rear. It is located at a hardly accessible height on a framework, mounted in the form of a light box with luminants on the inside. The light box bearing the blue colour is large enough for the blue to distinctively assert itself, and positioned significantly enough for the blue to underscore the place of its presence. It protrudes beyond the boundaries of the gallery building off into the path and is as wide as a street, thus assuming the manner of shop signs and of commercial advertisements.

The blue beckons highly visibly to come closer to those strolling on Philosophenweg as well as those coming from the direction of the Küppersmühle Museum, to those walking along the city wall from Schwanentor and Zvi Hecker’s building for the Jewish Community Centre or who are picking their way through Dani Karavan’s Garden of Memories. The latter even see two blue rectangles because a further one is located to the left on the floor of the DKM «window gallery» offset from the one mounted high up on an outer framework.

The two blue rectangles are very noticeable. They make the place more attractive, creating a distinctive place. They suggest that something is special where they are. They discreetly call during the day, and cry out quite loud at night. They demand that we pay attention to them.

In fact such light boxes hardly attract our attention at night any more, neither do such colour fields during the day. The advertisements in our cities have conquered the optics of urban spaces to such an extent that imagining that they were not there would mean taking note of a loss. In the historic district of Eichstätt, the diocesan and Catholic university town in the Bavarian Altmühl Valley, one has to get used to the fact that something is not missing there which has become a part of our everyday life, but fundamentally disturbs: the advertisements, the neon signs, the direction signs vying for sensations, the posters and billboards. But they are no longer to be found there in order to show off the architectonic forms of the existing baroque buildings as well as Karljosef Schattner’s moderate modernist rationality.

We now find two blue rectangles appearing like common advertisements in the inner harbour at Duisburg amidst recent glass-dominated administrative buildings and old brick warehouses. But they do not carry any advertising messages, do not announce anything or proclaim something or point to anything that they cannot themselves redeem. Yes, they even make the place where they are situated more attractive, but only something that makes the site more attractive is situated there: themselves, the two large highly visible blue light boxes by Nikolaus Koliusis.

Is it art for art’s sake? Undoubtedly – but not solely, as is often the case. Nikolaus Koliusis’s exhibition contains a subtle subversive content that undermines the ideal of pure self-referencing.

The isochromatic, or «monochromatic» blue rectangles as they are more commonly designated, are undoubtedly to be catalogued in the tradition of concrete art which does not intend to depict anything over and above what it shows itself to be. Up to and including the infinitesimally hardly comprehensible differentiation, the artistic representational interest concealed by the ideology of monochromaticism in the tradition of Russian avant-gardists and American colour field painters has talked its way into the showrooms of art – with the decorative elimination of the aesthetic and historical content as the fatal consequence.

And now monochromaticism in the public place. What will happen when this art form, which has survived its commercial baptism by fire at the very latest since the striking red monochromatic introduction of VEBA’s successor, E.ON, appears in public ridden of its message as undertaken by Nikolaus Koliusis in Duisburg? Exactly, it will rebound again by means of stepping out into the public space, by becoming an autonomous element whose effect solely comes from within and solely demands to be perceived for itself.