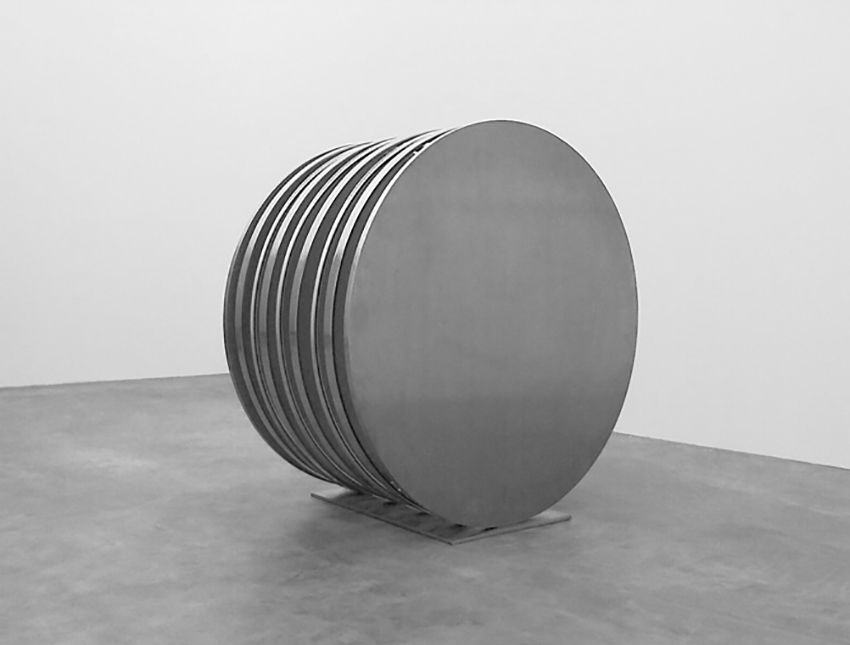 Two standing discs one at the left, one at the right as well as four hoops made out of flat iron and three out of rounded iron mounted at intervals alternately in between them was this once a closed flat barrel that was spread out into its present form? Or are the nine elements waiting to be connected to each other, for example to be welded together to form a flat barrel? Or do they concern nine simple elements that can be viewed individually, but which form an irrevocable unit in the order fixed by the artist: just 4 flat hoops, 3 three round hoops, 2 discs – 1 sculpture, 0 further intention?

Since its theoretical founding almost 80 years ago and its ensuing establishment, it presents itself, in a manner of speaking, as a timeless phenomenon: Concrete Art. The works made in this style wish to be nothing else than what they are. The viewer is “solely” intended to understand its forms and materials, the constellations and the arrangement in which they are placed to each other as what they are. It consistently opposes being overloaded with symbols and all extraneous contentual matters as well as iconographic omnipresence and narratives, anything that references something outside the piece itself. The creation of pure forms was intended to put art back on its feet, while observing such pure forms was intended to cause the viewer to look and reflectively remain with the piece in a visual manner.

Ernst Hermanns’s sculpture and the demure title deriving its catalogue raisonné number “WV 107 II” can only be seen in this context. The viewer is supposed to recognize what it signifies by looking. And that can naturally as an analogue, as it were also be transferred to conditions lying outside the sculpture. How far apart can the discs and the flat as well as the round hoops be placed so that the sculpture as a whole can still be perceived as a contained volume and not only as an addition of individual elements. And on the other hand, how close can the elements be placed next to each other without taking away the sculpture’s open quality?

These types of questions are in fact posed everyday: How close may someone position himself next to someone else in order to feel like a person who joins in and not like an intruder? Or what is the maximum distance between people so that they can still be recognized as a team?

Ernst Hermanns dealt with these abstract and yet very concrete questions throughout his oeuvre. He created pieces that can be interpreted as open-air communication models or as models that can also be seen as simple distance suggestions for tension and relaxation. Without feeling a spiritual relationship to the Asian way of thinking, his sculptural questions are not decidedly Western.