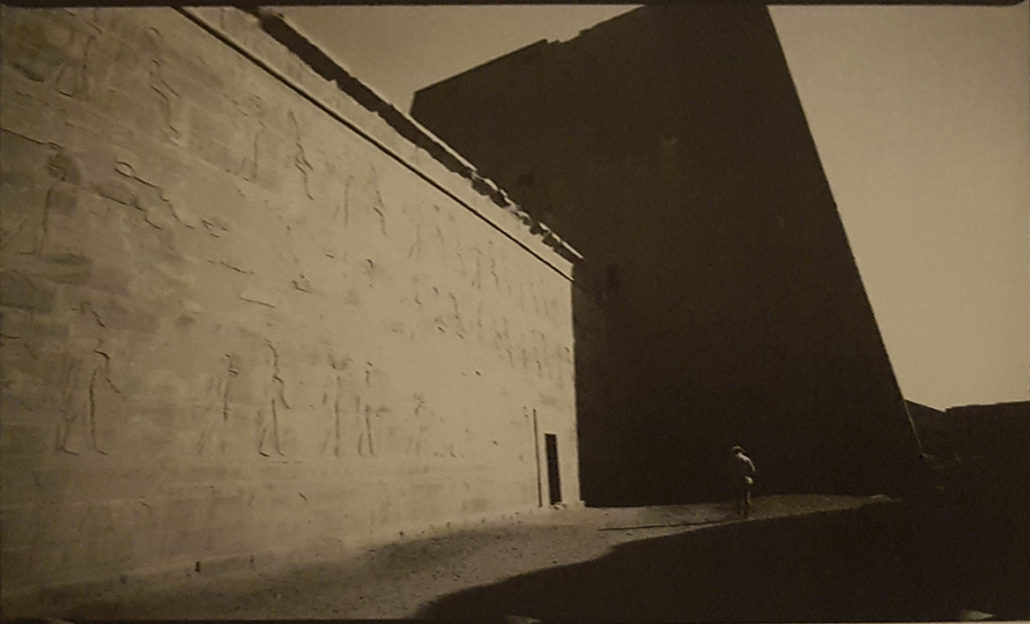 In a two-part exhibition series, Museum DKM commemorates the photographer and conceptual artist Ulrich Tillmann (1951-2019), who died on February 26, 2019. The series kicks off with a presentation of his images of Egypt.

Ulrich Tillmann embarked on a trip to Egypt in the early 1990s, during which he photographically documented ancient Egyptian architecture in the style of 19th-century travel photography and processed it in a historically aestheticizing way in the after-view. In the exhibition Memories of Ulrich Tillmann. The Egypt Pictures _ Part 1 we are showing for the first time a convolute of selected works from the collection of the DKM Foundation.

Tillmann’s large-format images of Egypt are recreations of 19th-century travel photography and at the same time pay homage to the beginnings of the history of photography. 1839 marks not only the year in which the first photograph of the pyramids of Giza was taken, but also the publication of the first practicable photographic process, the daguerreotype. It was quickly put at the service of science, under the influence of contemporary realisme to correct the romantically distorted image of Egypt.

Before his trip to Egypt, Tillmann studied Gustave Flaubert’s and Maxime Du Camp’s Journey to the Nile in detail. The latter recorded the Egyptian monuments in 1849/1850 on behalf of the French government and created an impressive portfolio in the early days of photography, to whose strict pictorial aesthetic Tillmann’s Egypt pictures follow. With a historical-looking brown toning, the artist apparently placed them in the early phase of Oriental photography, in a period that was also the high point of Nilexotism and in which the motif of the pyramids was to become the darling of travel photography.

Although historically staged, the monumental format of Tillmann’s photographs shoots far beyond the technical possibilities of the time. Even the painterly wipe marks of the developer fluid at the edge of the image and sometimes demonstratively on the center of the image are an expression of an obvious manipulation of this anachronism. As an indicator of a multitude of overlapping narrative layers, they even mark the complexity of the reception of Egypt. The brutal intervention in the subject of the picture may also allude to the violent downfall of Egyptian high culture and the staging of a European power as the supposed savior of cultural treasures from distant times. By means of his congenially applied meta-language, Tillmann succeeds in reflecting on his own cultural experience and conveying the multiple view of the Other, into the past and up to the present.

Ulrich Tillmann studied photography at the University of Applied Sciences in Cologne before going on to study art history and theater, film and television studies at the University of Cologne. From 1977 to 1987, he fulfilled teaching assignments for photography and film at the Cologne University of Applied Sciences and the University of Cologne, the Düsseldorf University of Applied Sciences and the Gesamthochschule Wuppertal. His artistic work is characterized by a particular versatility and moves between photography, video and conceptual art. In 1978, together with Bettina Gruber and Maria Vedder, Tillmann opened the anti-commercial Gallery without a Gallerist, an exhibition space for photo and video art, which was expanded in 1981 by the Workshop for Experimental Work Situations. In the same year he created his alter ego Klaus Peter Schnütger-Webs and the Klaus Peter Schnütger-Webs Museum, which is closely interwoven with his biography and with the art scene and cultural politics in Cologne. From 1986, Tillmann worked as curator of the Agfa Foto-Historama at Museum Ludwig, for which he conceived, among other things, the exhibition Die Reise zum Nil 1849–1850. Maxime Du Camp und Gustave Flaubert in Ägypten, Palästina und Syrien in 1997. From 2000 to 2016 he worked there as a scientific documentarian for painting and sculpture.