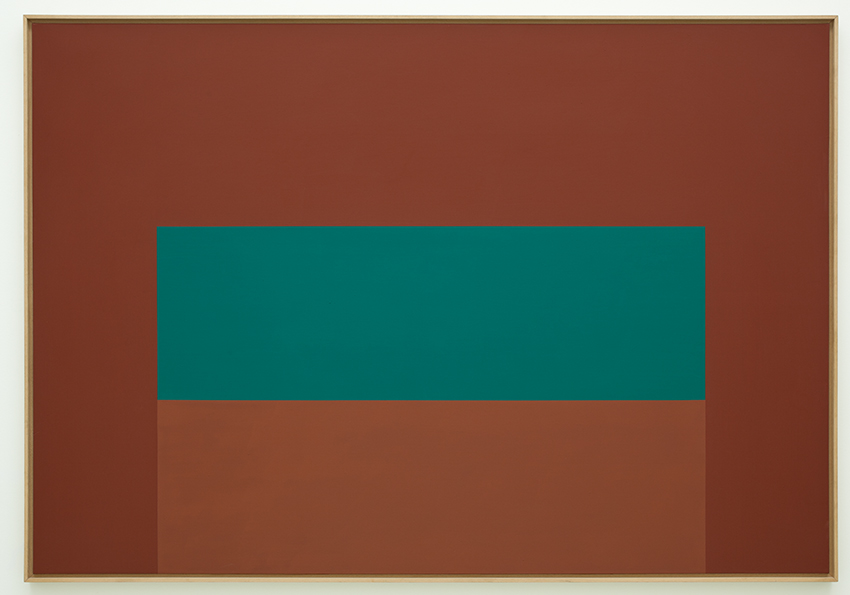 “My workroom has high ceilings, a rectangular floor plan. Eight windows are positioned across from each other in fours. Good light. Cross-ventilation; still there is this constant, intense turpentine smell. The paintings are leaned up against the front wall. Works on paper scattered on the floor. Silence. Everything around us gives us a charge.” (U.E., Zwischenräume, 1987). Ulrich Erben is describing his studio in a former, meanwhile demolished school on Eschenstrasse in the Wanheimerort district of Duisburg, Germany, where he worked from 1987 to 1993. It is there that he developed the paintings entitled Colors of Memory, where Erben combines his return to color – after a decade of «white paintings» from 1968 to 1987 – with the formally more loose paintings in the 1977 to 1987 «prima vista» series and the return to the geometric structure of his «white paintings». Five of these paintings from Colors of Memory – all of them the same size – bear the title Wanheimerort. One of them belongs to the Museum Wiesbaden; the artist donated another three to the DKM Museum. These four paintings will now be on display in one room of the museum. 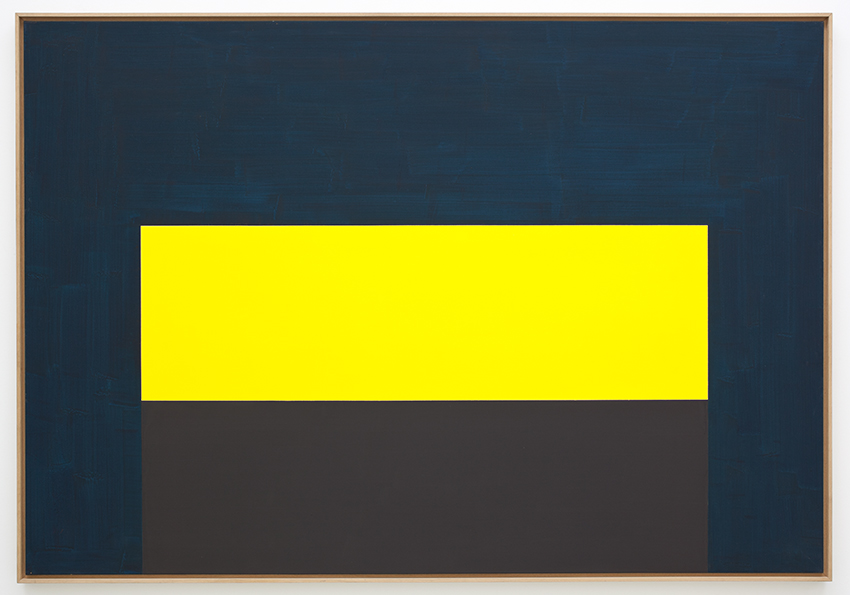 “The canvases that I’m painting lie on the floor, which keeps the paint from running; I have a chance to see and work on the developing piece from all sides. The format bears a relationship to my body; I have to be able to reach the center of it easily. Generally I begin with preliminary sketches, but I only follow them up to a point. If the paintings of recent years seem very immediate and appear to have been developed directly, then the same is true of the new work, only I paint them over much more. It’s a reference to the white paintings that characterized my practice between 1968 and 1977. In any case, I’ve noticed that everything that develops in the way of new work is directly related to my earlier work. There are always things coming up in the work that I have already dealt with in other contexts. For me, the step into the future is a journey into the past. I drive along a familiar road, but the view from the window has changed and piques my curiosity.” With these words (U.E., Zwischenräume, 1987), the painter allows the viewers take part in the making of his paintings.

In Erbens’s time, in other words from 1987 to 1993, Wanheimerort was a very different place than the one we see today. Copper mill, steel mill, cable-manufacturing plant – all of it is gone along with the school building. What do the colors convey of Erben’s Wanheimerort? But first a look at the paintings themselves: all of the transverse rectangular picture fields are surrounded by a wide margin or border that encloses a rectangular field within it. The margins vary in proportion: larger on the top than the bottom and even narrower to the left and right. In two paintings, the inner field is left undivided; in one it is partitioned into three vertical sections and in the others, it is subdivided into seven horizontal strips. The two pictures with the undivided interior areas also share the fact that the lower margin area is limited at the sides in proportion to the main field. Though constructed the same, the paintings diverge in their colors. The blue-black one with the blackish gray lower margin has a luminous yellow glowing from its center. The brown-red one with a brown-beige margin holds a dark green field in its interior. Brown-red hues also dominate the two other paintings; the border areas of each are kept to a burnt sienna. In the painting with the three-part central field, cobalt blue fills two outermost sections while the nearly square section between them holds a reddish-brown, tying it to the red-brown in the upper and lower margins while providing contrast at the same time. In the painting with the central field divided into horizontal sections, four narrow stripes border three somewhat wider ones. Each of upper/lower narrow stripes as well as the broader stripes in the middle feature a brownish-green umber, while the other two, broader stripes show a full, in itself differentiated red, accompanied by slender red-brown stripes connecting it to the umbra stripes in the center. As Erben noted with regard to image construction: “Composition is a term that has lost its meaning. I wouldn’t use the word ‘composition’ anymore, instead I talk in terms of placement” … “There is often a central part of the painting in Colors of Memory. Yet the crucial factor has much more to do with the symmetry, to calm the placement. The color is the life, the agitation. The center is static, it is permanent absence.” (Conversation with Tayfun Belgin, 1997)

Back to the question as to what the Colors of Memory (Wanheimerort) can tell us about Erben’s Wanheimerort. Three of the paintings are dominated by red/red-brown/brown/brown-beige hues combined with blue and dark green. They are color tones produced primarily by copper and steel mills, the reddish-brown dust released by the basic converters, the emissions produced in copper manufacturing. The dense blue is no sky blue, the Rhine River was never blue anyhow. It is, in other words, an impression of color that must have lingered somewhere in Wanheimerort, possibly in the evening, like the deep green reminiscent of trees just before sunset. Together with the blue-black/gray-black, the luminous yellow conveys an impression the painter might have had and taken with him from a late return home to Düsseldorf, coming back from a day’s work at his Duisburg studio.

Ulrich Erben is therefore not representative of concrete painting, which makes no attempt to confer encrypted information and whose effect is generated solely by its physical presence in the surrounding space. “For me – according to Erben in his conversation with Tayfun Belgin, 1997 – the discussion is: abstract or representational, as old as it is, is irrelevant. Like the abstract, the representational consists of forms and colors.” And as Peter Friese remarked on Erben’s painting: “Though his paintings give nothing further to look at in the end, the artist takes glimpses of nature, things he has seen, experienced, felt and remembered as an occasion to create something that can convincingly stand alone in a purely painterly way and without being obliged to representation.” Erben – born 1940 in Düsseldorf and raised in Rome – studied in Hamburg, Venice and Berlin from 1958 to 1965. Afterwards he held a studio near Goch on the Lower Rhine, where he focused on landscape painting. A 1967 stint in New York led to a simplification of forms and a reduction of color. Erben’s white paintings featuring structured geometric forms emerged after 1968, along with light objects and murals. In 1977 he began painting his colorful, more loosely structured «prima vista paintings». With Colors of Memory, the series that followed starting in 1988, Erben began to incorporate the rigid, geometric structures of the «white paintings» once again. Erben painted the small format «what I see-paintings» between 1998 and 2001, landscape impressions captured with varying degrees of recognizability and abstraction. The last ten years show Erben in a confident play with the various possibilities of artistic expression that he has opened over the course of his work. In doing so, he has more frequently taken the opportunity to design entire walls, spaces, and architectural structures than in his earlier work. (Museum Kurhaus, Kleve, 1988; Westfälischer Kunstverein, Münster, 1999-2000; DSGV, Berlin, 2001; Jakob-Kaiser-Haus, Berlin, 2001; Galleria Studio G/, Bologna, 2004; Castello di Montalfina, Orvieto, 2009