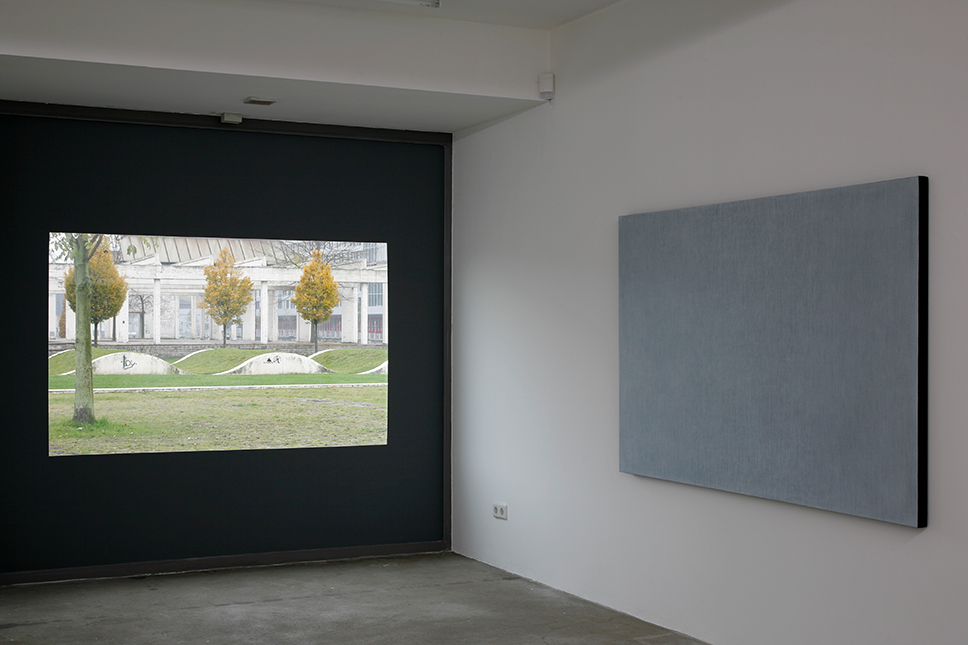 L´Univers est en nous, le monde est son miroir
(The universe is within us, the world is its mirror)

With his consideration of the world as the mirror of the universe that is at home in ourselves, Gianfredo Camesi captures two central moments that fundamentally determine his pictorial work. On the one hand, the mood of the poetic form of his statement reflects the aesthetic atmosphere of his works. On the other hand, the poetic-philosophical aspiration of the statement reveals the concern to find access to a metaphorical interpretation of a universal understanding of the world beyond the experience of the visible. Plénitude, 2007, Gianfredo Camesi’s installation for the Foundation DKM in Duisburg, thus becomes accessible in experiencing its aesthetic dimension and, at the same time, in tracing the message it opens up about the universe within us. 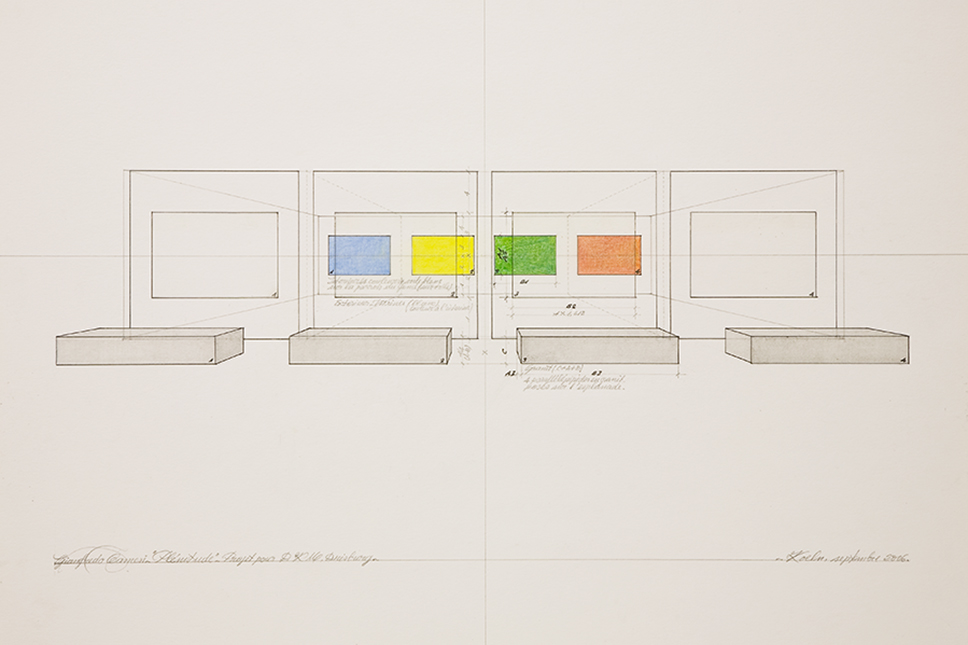 As a visual presence of radically reduced pictorial means, this is how the first impression can be described when encountering Plénitude . On the front wall are four panels of paintings of the same size, each accompanied by another painting of the same format. The unity of measure underlines the calm and order that defines the space of the installation as a whole. At the same time, the equal size of the painting surfaces refers to references that exist not only between the panels but also between the other elements of the installation. The windows that delimit the exhibition space to the outside as large transparent walls are reduced to the same size as the surfaces of the paintings by means of foils. The planar form of the paintings is thus repeated in the windows. Camesi takes up the exact dimensions and size of the picture panels a third time: in the four sculpture blocks that lie outside the windows.

Once again, the moment of reduction of the pictorial means becomes recognizable in the more precise description of the individual elements. The sculptural outer forms concentrate on clear contours and simple shapes. Even their material composition does not aim at the visualization of material qualities that can be experienced optically or haptically in an elaborate and complex way but at the simple visual presence of a form that seems to aim primarily at the optical assertion of its presence. The window surfaces, “cut out” as it were by the foil covering, intend only the experience of their transparency as a transition between inside and outside. The visual dynamics of the color of the central four painting surfaces of the front wall, red, green, blue and nature, as well as the black of the side panel are reduced by a light-like transparent white veil. The paintings only show their original color tone at the block-like raised edges.

The elements of the installation thus construct a field of tension from poles of opposing moments. Materiality and heaviness form the antithesis to light and lightness. Transparent surfaces correspond to bodies of different material density, such as impenetrable sculptural mass and light-colored density. Inside and outside alternate with each other. Nothingness and emptiness are brought into balance with substance and matter. The aesthetic experience of the installation Plénitude is thus accompanied by an interplay of references in which the viewer is included. He perceives that the installation follows a regularity. Camesi understands it as a metaphor for an interpretation of the human being with its relation to a universal whole.

The uniform size of the paintings, the transparent window surfaces and the outdoor sculptures explains itself as a module. It results from the allocation of the parts in the spatial whole and in such a way that the elements, paintings, windows, and sculptures, are precisely connected to each other mathematically-geometrically by a precise guidance of straight lines with points of origin, destination and contact at their edges. The human being is also integrated into this relationship. On the one hand, as a participant in the space and thus as part of the functioning whole. Secondly, however, also in the viewer’s position outside, determined by the artist. From here, he also directs a reflective gaze at Plénitude as a pictorial concretion of a regularity between corps (body) and esprit (spirit), which Gianfredo Camesi puts into a convincing formula:

This exhibition was supported and funded by: