The exhibition was accompanied by a booklet with a text by Christian Viveros-Fauné and photography by Werner J. Hannappel. 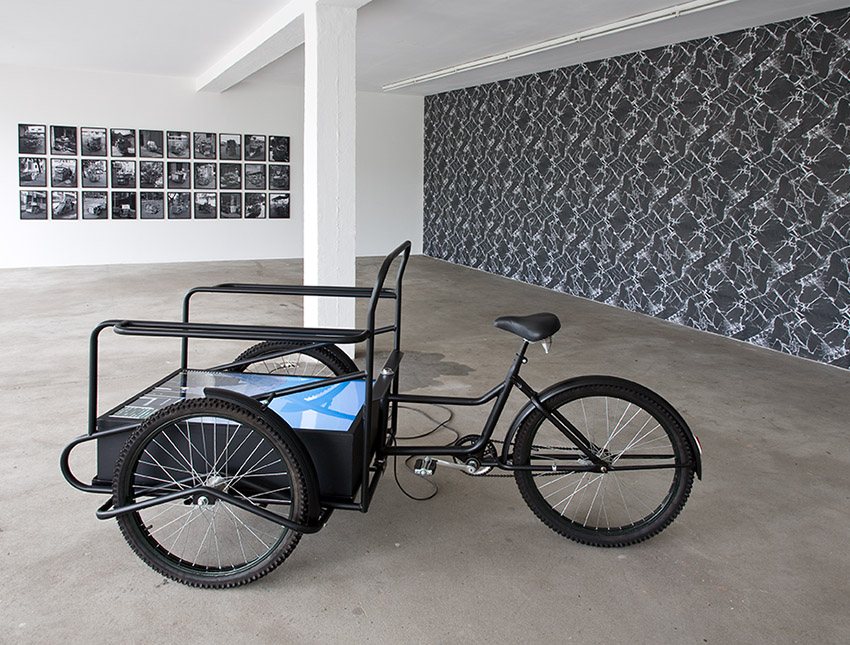 In 1958 the French philosopher Guy Debord published the following artistic-philosophical definition in an obscure Belgian Surrealist review: “One of the basic situationist practices is the dérive [literally: «drifting»], a technique of rapid passage through varied ambiances. Dérives involve playful-constructive behavior and awareness of psychogeographical effects and are thus quite different from the classic notions of a journey or stroll.” 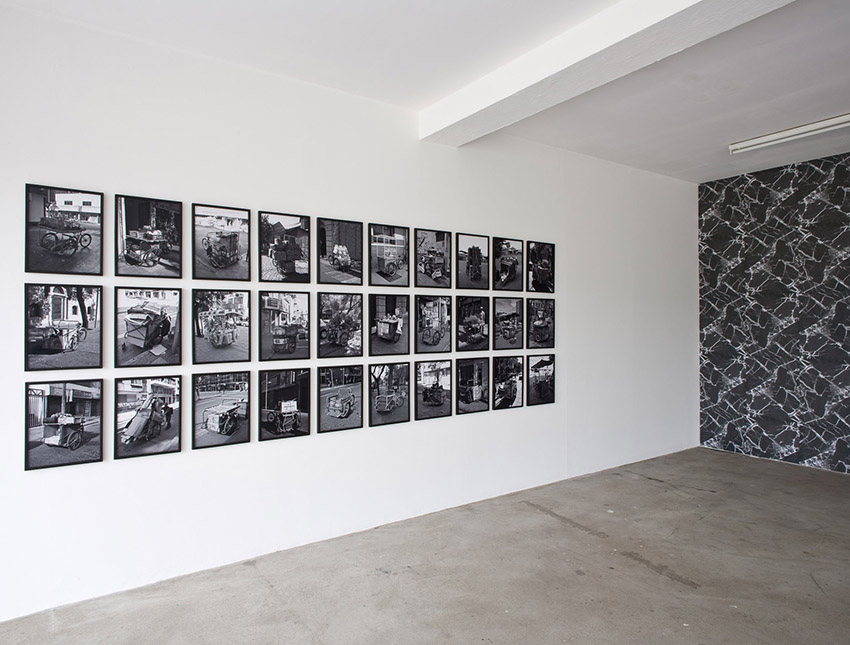 Once a thoroughly original concept, the idea of dérive has languished of late. Now a favorite of graduate school theses and Hip-Hop album liner notes, this half-century-old notion of creative perambulation has turned into its own cliché – like the terms proletariat and revolution. A crutch for generations of right-thinking professionals in the fields of arts and letters, Debord’s drift today is hobbled by a stubborn orthodoxy that affects genuine critical thinking much like polio does shoe size.

An invitation to investigate one’s own surroundings without preconceptions – be they geographical, psychological, or ideological – Debord’s purposeful aimlessness is essentially a recipe for charting weird correspondences among familiar surroundings; of discovering funky, subterranean relations between the mind and everyday signs, shops and street corners. Properly applied, Debord’s dérive – non-programmatic at its core – should result in the transformation of the street into a hall of mirrors. To quote Karl Marx (as Debord does in his Theory of the Derive): “Men can see nothing around them that is not their very image; everything speaks to them of themselves. Their very landscape is alive.”

Living landscapes of meaning, correspondingly, are what we look for in the work of the world’s most relevant artists. This demand goes double for those artists who take Debord and his fashionable, largely misunderstood writings as direct inspiration. Take Patrick Hamilton, for example. A Chilean artist who is dead serious about his playful commitment to upend familiar meanings – what the culturati call «culture jamming» – and his debt to Guy Debord, scours the urban streetscapes of his favorite metropolises for associations that are as routine as they are profoundly volatile. A lifelong stroller of his native Santiago – a city as full of social and cultural dislocations as any of the world’s developing capitals – Hamilton doesn’t have to wander very far.

In Santiago, steel and glass buildings stand cheek by jowl with squat stucco constructions; flea markets lie just kilometers downwind from American-style malls; and organ grinders pullulate – alongside swarms of parking attendants and snot nosed pelusas – outside local Starbucks franchises. Here, unlike the cities of Western Europe and North America, the notion of “local color” invokes a welter of global contradictions. Like many other urban locales in medias res of ongoing social, economic and cultural development, Santiago is a place where global commercial culture regularly shoulders aside local kitsch – though, just as often, local kitsch gives as good as it gets, however temporarily.

Enter Hamilton’s tricycle – a workingman’s delivery vehicle as well as a vendor’s cart hawking everything from old-time services, like knife-sharpening, to peanut and ice-cream snacks – which this artist catalogs in a straight documentary series that recalls, not accidentally, the black and white photographs of Bernd and Hilla Becher. A species of synecdoche for the clash of local and global cultures, Hamilton’s tricycle drifts along wide boulevards of meanings, some resolutely useful and some symbolic. Actively hijacking this quaint element of Chile’s local economy, Hamilton successfully transfers its meaning from one arena to another, transforming it into something else entirely – a monument (or anti-monument, as the case may be) to socioeconomic and cultural dislocation, a memorial to a global shift in worldwide human exchange perched precariously on three wheels and a flatbed.

Substituting a part (this literal if picturesque engine of local commerce) for the whole (a developing nation’s movement toward the new global economy), Hamilton further confounds straight readings of his found sculpture by deploying it as a light box. Displaying an airbrushed picture of the Santiago skyline – of the kind used by advertising companies to promote luxury hotels or private banking services – and installed before a «mural» made up of fake marble siding (which apes the standard décor of office tower lobbies), Hamilton presents both the image of neoliberal spectacle and its own full-sized parody. Located exactly where poor vendors haul payloads of potatoes and recycling, Hamilton’s backlit, photographic view of Sanhattan – a 21st century Rotarian’s mirage of Andean skyscrapers absurdly sited on one of the world’s most fragile tectonic faults – pictures the city as a modern-day Atlantis. Unmovable in the minds of neoliberal and IMF fabulists, this vision of what essentially remains a gritty, conflicted capital city is every bit as impractical and mythical as if it were located hundreds of miles underwater.

Hamilton’s sculptural metaphor for Santiago, like a good story, ultimately drifts in and out of polemical sense, fulfilling the shifting expectations required by any genuinely effective work of art. Off-piste as much as on message, Hamilton’s room-sized installation imaginatively wanders Santiago’s roads and byways while fetching up echoes of the streets of other international cities. Lagos, Jakarta, Tirana, Algiers – all of these towns come into focus, however fuzzily, from the vantage point of Hamilton’s particular if universalizing dérive. If his sculpture had a passport, it might read, altogether unironically: Citizen of the World.