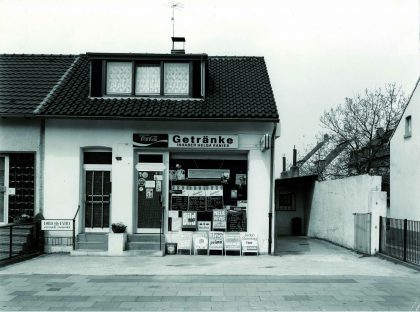 The photographer Tata Ronkholz (1940 – 1997), was one of the students of the Becher class at the Kunstakademie (Art Academy) Düsseldorf, along with Thomas Ruff, Candida Höfer and Thomas Struth. As one of the first students of the later famous class, Tata Ronkholz also devoted herself to the transience of industrial cities. The Museum DKM showed in 2016 photo series of Tata Ronkholz. The most well-known and extensive group takes up the theme of drinking halls, of which few are still preserved today.

In her photographs, Tata Ronkholz documented the idiosyncratic design of the small buildings, the range of goods and their integration into the surrounding architecture. Their sober, black-and-white documentation (photographs) of the drinking halls characteristic of the Rhineland and the Ruhr area is thus a testament to historically rich everyday culture. The presentation was supplemented by gripper baskets and the display of a wallpaper shop.