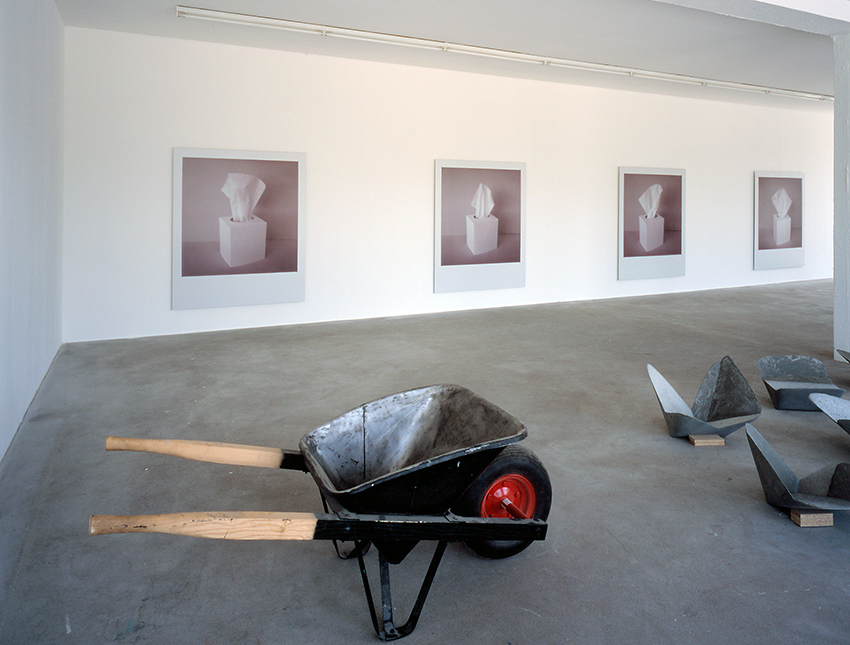 Hugo Suter works in a variety of different media; he paints, draws, makes objects (which he sometimes calls «paintings»), takes photographs, works extensively with glass… all with a singular goal: to explore the way we perceive objects and how, by perceiving them, we give them meaning.

Suter interprets many of his works as an actualization of rules, much the way a player interprets and enacts the rules of a game with each match. The goal of a real player, as Marcel Duchamp was at chess, is not first and foremost to beat his or her opponent, but to examine the rules by playing (beating the opponent keeps the machinery going, no more). Suter’s approach is similar: He looks at the way rules reveal themselves in things that are alike without being alike. This is what distinguishes his work from that of scientists, who verify their hypotheses by reproducing results. Hugo Suter is an artist, even when he adopts the scientist’s approach. His aim is not to see whether a particular hypothesis is right or wrong as an artwork can be neither, nor can a game of chess. A work of art simply is. It is up to us, those who perceive it, to give it meaning—to imbue it with a truth that resonates with us. 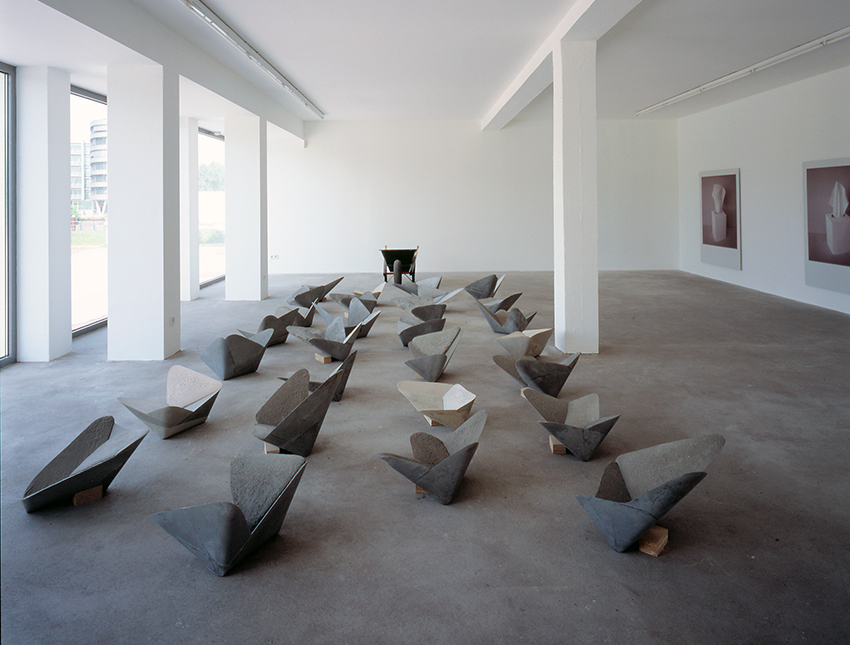 On what kind of rules are Suter’s works based? The exhibition provides two answers: four large photographs show paper tissues that—having been quickly yanked from the box—have assumed a certain form. In other words, the tissues actualize their inherent form-type, assuming shapes that are specifically not the same. In this way we become aware of them in terms what can be called the conditions from which they derive. The rules in this particular example are pre-existent, a by-product of the way the tissues have been folded into one another in the package. These forms are created when we pull one tissue out of the box and, by doing so, pull the next one out with it. They are created instantly, and this property is inherent in the forms themselves. Suter refers to the photographs, or what they show, as «instant sculptures»; he documents them with Polaroid, which is to say with instant-film photographs. The objects and their images share the property of «instantaneousness»; they also affirm one another in this property. It is through this that the work’s meaning emerges.

The work is at first glance a readymade, even when the individual forms are distinguishable as such. A real box with a real tissue sticking out of it would only repeat Duchamp’s gesture for the umpteenth time. It is important that this ordinary object is removed from everyday life and presented as its image. In real life we would only notice the tissue box for its purpose, not for its form. Photography gives it form.

It is in this that we recognize a defining feature of Suter’s art: it draws on our perception in day-to-day life and makes us aware of ordinary things (the morning Kleenex box, for example) as the basis of sensory experience. Might we also say that it poetizes objects (or our perception); that within this new perception we ourselves become productive, perhaps in other ways?

The concrete volumes placed on the floor are also realizations of a form-type. Their various shapes reveal the rules upon which the type is based, much as matches played reveal the rules of chess. They represent twenty-eight matches that are possible with these rules (Why these twenty-eight matches in particular? That is another question.). These rules did not exist beforehand, as they did in the case of «instant sculptures». Nor were they devised by an unknown inventor, but by Hugo Suter: an angle-bottom PERFECTA wheelbarrow, a 24-kilogram sack of EMACO SFR mortar with galvanized steel fibers, resistant to frost and salt, four-to-five passes, each requiring a day for the concrete to harden.

This particular kind of volume is created by pouring the wet cement into the wheelbarrow several times while altering the wheelbarrow’s position. The slurry forms horizontal surfaces, the shape of which is determined by the trough and (gradually) by the other fillings. The surfaces, which are more or less smooth depending on the consistency of the mush, indicate the positions that the wheelbarrow has successively taken. In a sense, the object’s final form shows the movements of the wheelbarrow, which is to say those of the wet, concrete slurry in its trough: as though a worker had taken it on a number of passes across the construction site.

We can also take it one step further and say that the form turns the time of its production into an object.

A work is always created in time, and the image created when we see it does the same: our eyes move from one place to another, assembling it in a sense. Rarely is this time the subject of the work. And yet a volume of cement like this one does just that: It broaches the subject of time and thus of making and seeing, both of which also, and to equal extents, evoke the process of making— «the one in the other».

The order of operations is indicated in the position of various hardened pourings relative to one another, the way they fit together. In this respect, the volumes bear something of a resemblance to the chronophotographs of Étienne-Jules Marey, who used photography to capture phases of human movement. Unlike ordinary photographs, they do not show time as it happened; instead the chronophotographs show time transpiring as we look at them. The same can be said of these volumes: that the time of their making happens at the moment of their perception.

A body’s form is not the mechanical consequence of conditions described above. The wheelbarrow’s position has to be decided at every step of the work process. A form develops from the artist’s ensuing decisions, pointing on the one hand to its production, but also to something else. What exactly? At this point we realize that we are dealing with two kinds of seeing. In the first, we see the «basis of that form»: we recognize the rules governing the volumes and their shapes, precisely because of the differences they exhibit; we then see them a second time on the basis of those rules. Max Imdahl speaks in this sense of «productive seeing».

Thus, the volumes have an appearance that can be described with the technical conditions of their fabrication. But they also form patterns, show demonstrable forces having to do with these conditions. They enable a second kind of seeing that leads from the forms in front of us to experiences with other forms. This is not reproductive seeing, which is to say a reenactment of experiences we have already had, but a recognition of what the things we see have in common with those we have seen before. And that is this pattern.

Thus, the cement volumes suggest a different kind of movement than that of the wheelbarrow. Wider and narrower, rounded surfaces strive outward and upward from the recessed center, echoing the shape of the trough. Wooden elements hold the volumes in a position that enhances their «lifting» effect, and it because of them that the work has also been compared gray birds lifting in flight from a field. Although they also evoke other images besides birds, all are similar in that they have ongoing movement in common. A pattern.

I view Suter’s works as repeatedly dealing with these two ways of seeing, and with the fact that one conditions the other. It is only in this relationship that seeing is simultaneously objective and subjective, as bound to the work and its structure as it is the «self» and the structure of its perception.